In a move that is symbolic of the tattered legitimacy of the German Advisory Commission concerning Nazi-looted art in state museums, the heirs of famed and persecuted Jewish art dealer Alfred Flechtheim today suspended the state-run non-binding mediation process concerning Violon en encrier(1913) by Juan Gris in the Stiftung Kunstsammlung Nordrhein Westfalen (Art Collections Foundation of Northern Rhineland/Westphalia) in Düsseldorf.  Dr. Michael Hulton of San Francisco, California, Flechtheim’s great-nephew and heir instructed his attorneys to put on hold the Beratende Kommission im Zusammenhang mit der Rückgabe NS-verfolgungsbedingt entzogener Kulturguts, insbesondere aus jüdischem Besitz’ (Advisory Commission on the return of cultural property seized as a result of Nazi persecution, especially Jewish property, often called the Limbach Commission after its presiding member Jutta Limbach) after disputes about the fairness of the proceedings.  In a letter to Culture Minister Monika Grütters accompanying their press release, Dr. Hulton’s attorneys Markus Stoetzel and Mel Urbach issued a scathing criticism of the proceedings and asked the Advisory Commission not to make any recommendation about the painting in Düsseldorf until a further investigation into the procedural missteps could be completed.

Flechtheim’s is a tragic story.  Indeed, he did not even have to wait until after the Nazis seized power to attract their attention.  In a now-infamous 1930 issue of the Party propaganda paper Illustrierter Beobachter, Flechtheim’s exaggerated Semitic features are portrayed, with the caption “Die Rassengfrage ist der Schüssel zur Weltgeschichte”—“The race question is the key to world history.”  Not content with that level of subtlety, the image superimposes Flechtheim’s face on a globe, as a Star of David rises over it like the Sun.  Just before the Nazis took over the government, they put their "Jewish Bolshevist" conspiracy in visual form using Flechtheim's face: 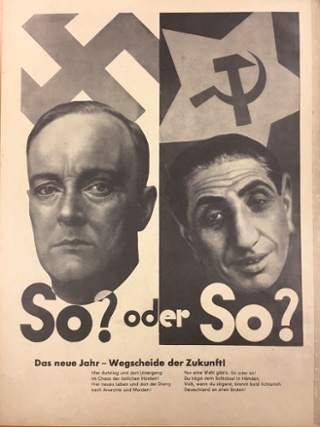 Flechtheim’s represented many of the stars of the Expressionist movement like George Grosz and Max Beckmann.  After January 1933, however, Flechtheim simply could not stay in Germany.  Less than two months after Hitler became Chancellor, members of the Kampfbund forcibly stopped an auction held by Flechtheim in Düsseldorf.  He fled and left his galleries in the hands of his longtime employees.  This trust was soon betrayed.  His gallery space in Düsseldorf was appropriated by his assistant Alex Vömel (a Nazi Party member) in 1933, who cheerfully advertised his new gallery in “the former rooms of the Galerie Flechtheim.”  Another employee, Curt Valentin, established the Galerie Buchholz in New York, where he soon built a conduit for “degenerate art” from Germany to the U.S. market.  Flechtheim died of blood poisoning in London in 1937.  His widow Betty died in 1941, committing suicide after learning that her deportation to a camp in the East was imminent.

His niece Rosi Hulisch made efforts to sell some of while she herself was subject to racial persecution.  The Juan Gris painting was sold in 1934 in London, which Flechtheim’s heirs have argued was the result of his persecution.  The museum bought the work on the international market in 1964.

Dr. Hulton and the Düsseldorf museum agreed in 2014 to submit the matter to the Advisory Commission, which issues non-binding recommendations to state museums.  The Advisory Commission had previously considered Flechtheim’s fate in evaluating a request for recommendation in April 2013.  That claim concerned a painting by Oskar Kokoschka (Portrait of Tilla Durieux) that Vömel had sold in 1934 to a collector whose foundation was later absorbed by the Wallraf-Richartz Museum, which later conveyed it to the Museum Ludwig in Köln.  The Köln government refused to return the painting, arguing that the 1934 price was consistent with a fair market value.  The Advisory Commission concluded as follows in that case:

In the absence of evidence to the contrary, it is to be assumed that Alfred Flechtheim abandoned the disputed painting because of his situation of persecution.  The Nazi-persecuted loss of the painting is therefore affirmed.

Quite unlike the regrettable direction the Advisory Commission has taken of late, this put the burden on the German possessor to prove the legitimacy of its possession, not on the heirs of the persecuted.

Fast forward to the Gris matter, a hearing of sorts was conducted, though these are more a matter of sequential presentations than anything like an evidentiary hearing.  Only half the panel was in attendance. It was after the hearing that things went awry.  Dr. Hulton’s attorneys advised the Advisory Commission that they would follow up by letter for the entire panel, on evidentiary matters discussed at the hearing, and did so three days later.  Yet when they followed up earlier this week, they were told that the February 15, 2016 follow-up had not been circulated to the panel, and the Advisory Commission was already deliberating its recommendation. Combined with other irregularities in the procedure, Dr. Hulton concluded that the process was unfair.

Dr. Hulton said in the press release: “I am thankful for the recognition of the terrible fate of my uncle and his family that the Commission gave in the case of the return of the Oskar Kokoschka paintings three years ago.  Distinct from that time, however, I am alarmed in this case at the degree of information that was exchanged and the lack of transparency in the process that I experienced before and during the hearing, and that I had no opportunity to present my concerns to the entire Commission.  This gives no respect to the families of Nazi victims and is not what I expect from Germany.”

The Advisory Commission enjoys little international support, and even Hermann Parzinger, President of the Stiftung Preussischer Kulturbesitz—which received a recommendation concerning the Welfenschatzmuch to the SPK’s liking in 2014 that my clients are currently litigating in Washington, DC—acknowledged last year that the Advisory Commission needs material changes to remain viable. This certainly appears to be another nail in the coffin.