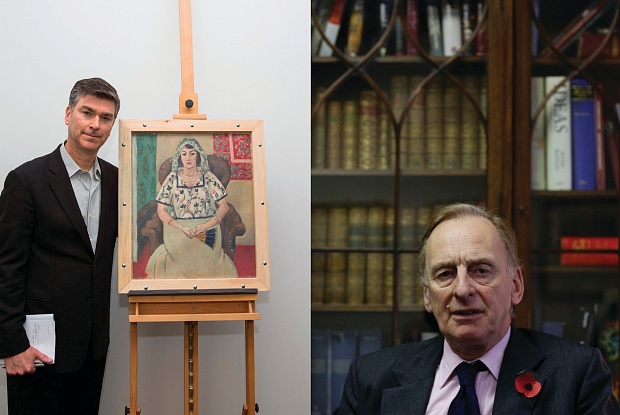 The privilege of running a commercial database of the world’s stolen art is proving as intriguing and complex as some of the crimes committed.

For the past 25 years, the task of keeping track of the millions of stolen or looted objects around the world has been taken on by the Art Loss Register (ALR). It provides a due diligence service to the art trade, insurers and—increasingly—private individuals.

The latest twist in the tale is that Chris Marinello, who founded Art Recovery Group (ARG) in 2013, has reported the ALR—which he worked for between 2006 and 2013—to the UK’s Competition and Markets Authority. The ALR, which is run by Julian Radcliffe, has had a database since 1991. Marinello launched his in early 2015. Both firms have UK HQs.

That there is no love lost between Radcliffe and Marinello is now a matter of public record.

ARG’s letter to the competition authority accuses ALR of “systemic breaches of competition law”, citing seven examples of “abusive behaviour”. ALR, according to the letter, “is implementing a persistent, pervasive and systematic plan to eliminate ARG fr om the market”.

Heading the list of complaints is what ARG describes as “vexatious litigation”, a reference to a civil claim that ALR took to the UK’s High Court in July. This claim accuses Marinello and others of “the unlawful establishment and operation” of ARG, citing breach of contract, breach of confidence and “infringement of database rights”, among other things. ALR’s claim demands the handover of any confidential information the defendants may have that belongs to ALR.

Marinello and the other defendants filed a counterclaim in November, in which “each and every allegation contained in the particulars of claim is denied”. A subsequent reply and defence was lodged by ALR in December, which also denied all allegations.

James Ratcliffe, ALR’s director of recoveries, lawyer and near-namesake of the company’s founder, says that, while he has not seen ARG’s letter to the competition authority, ALR’s legal actions are “certainly not vexatious” and that there is “no systematic plan” to eliminate its competitor. He says the claim had to be issued to protect the interests of ALR’s stakeholders because Marinello “took confidential information from our business and we don’t know the full extent of it”.

Marinello says: “The ALR knows exactly the extent of information in my possession because it was obtained openly, transparently and with express permission pursuant to an agreement signed by Julian Radcliffe in 2012.”

Julian Radcliffe is ALR’s majority shareholder, although Sotheby’s also has a stake (around 11%), as does Christie’s (around 3%), and Marinello himself (10%).

In ARG’s letter to the competition authority, Marinello describes ALR as “dominant in the market for the ownership and generation of an international database of stolen artwork”, with a market share of between 80% and 90%.

James Ratcliffe denies that ALR has a dominant share of the market. He says: “We have 90 auction houses [as subscribers], including five regional US houses. There’s a huge swathe of the market not touched by us.” The Artnet price database lists more than 800 auction houses globally, although ALR’s clients include Sotheby’s and Christie’s, the two largest auctioneers. “We’ve created this market,” James Ratcliffe says. “It isn’t unfair for us to have our clients.”

He goes on: “Multiple general databases are not in the interest of the art market—they would cause chaos.” He compares ALR’s log of 500,000 items to information providers such as the UK government’s land registry. “What if a theft victim registered their loss with one database and that item was sold by an auction house that searched with the other one? What is the answer to that? Was it negligent of the theft victim not to register with both databases? Should the auction house have searched both? What happens when a third one sets up? And a fourth?”

Not always the answer

James Ratcliffe adds that there is plenty of room for other databases to exist, such as those that specialise in losses from the Second World War or the records kept by national law enforcement agencies. “We are a very good starting point,” he says. “Sometimes we are all that is necessary, but we are not always going to be the complete answer.”

Marinello says: “This proves our point regarding the ALR’s anti-competitive behaviour. Competition in fact would provoke the production of better databases.”

There has been criticism that the quality of information on ALR’s database could be better and when Marinello launched his alternative service in 2015 it was welcomed by the trade. That year, Marinello was named Wealth Management Innovator of the Year by Spear’s, a specialist magazine.

“We never claimed that our system is perfect and are constantly working to improve it,” James Ratcliffe says, “but we are by far the best database of lost and stolen art.”

Many of ALR’s clients did not want to comment directly on the desirability of competition in this area of the art market. Martin Wilson, the global co-head of Christie’s legal and risk department, says his firm “supports all efforts for greater transparency of information on provenance and diligence”. Christie’s continues to submit its catalogues to ALR, he says, but also works with “many public and private archives, publications and academic experts to fill any gaps in provenance”, including Unesco, Interpol and the US Department of Homeland Security.

James Ratcliffe says he hopes that the civil case can be settled before it ends up in court. Marinello responds: “At present, ALR’s intransigence is preventing a resolution to the case.”

The competition authority has yet to say if it will investigate ARG’s complaint.

Why is the database so valuable?

While recovery companies can make big bucks from finding and returning lost or stolen works on a one-off basis, the really lucrative deals are few and far between and can take months, even years, to resolve.

A more reliable revenue stream comes out of the stolen works database. Auction houses, art dealers, museums, insurers, private individuals and other trade organisations can subscribe to it on an annual basis to check works they are offering for sale.

At the Art Loss Register (ALR), the annual fee is £500 for 25 searches, although auction houses, some of which submit every catalogue for a quick matching service, pay a different rate. Art dealers tend to want a more detailed search, and again rates vary. Art Recovery Group (ARG) charges £60 for a one-off search of its database, and tailors its packages according to its clients’ needs. Wh ere applicable, the ALR will issue a search certificate; ARG issues a full report.

Neither firm would confirm the total number of subscribing clients to their databases. The ALR says it has more than 90 auction houses as subscribers and that dealers are also core to its clientele. ARG says that it has signed contracts with a small number of London’s top art dealers and some major US insurers.
The ALR’s lawyer James Ratcliffe says the ALR conducts 400,000 searches against its database every year. Fine art paintings are the most frequently searched for, although he would not go into any further detail on this.

Both firms increasingly look beyond the theft and looting history of works by also taking areas such as financial liens and export restrictions into account.