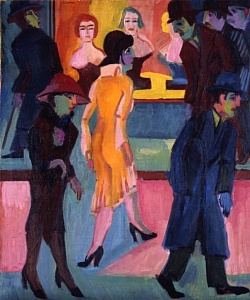 Supported by an array of sponsors, Dresden purchased the painting for an undisclosed sum from Galerie Henze & Ketterer in Berne, Switzerland. The Swiss gallery had bought it for £916,500 in 2008 at a Christie’s Impressionist and Modern Art evening sale in London.

Kirchner studied in Dresden and founded the Brücke group of artists there in 1905. The painting is one of nine he produced based on sketches made during a trip to revisit old haunts in 1925 and 1926, after he had left Germany to live and convalesce from mental illness in Davos, Switzerland. Kirchner was fascinated by the enormous industrialisation of Germany in the nine years he had been away and returned to his favourite themes of modernity and urban life.

“The acquisition of Kirchner’s work has a special significance for Dresden,” says Hilke Wagner, the director of the Albertinum museum, wh ere the painting will be displayed. She describes the city as “the birthplace of German Expressionism”.

The painting was bought directly from the artist in 1926 by Hans Posse, the director of Dresden’s art museum at the time. After some tough negotiations during which Kirchner claimed to have another interested buyer, he paid 4,000 Reichsmarks.

Posse was later chosen by Adolf Hitler to acquire works for his planned Führermuseum in Linz, Austria. During the Third Reich, works by Expressionist artists such as Kirchner were condemned as “degenerate”, and Strassenbild vor dem Friseurladen was shown in so-called “shaming exhibitions” in Dresden, Nuremberg, Dortmund, Munich, Berlin, Leipzig and Dusseldorf.

The painting was then sold to the New York dealer Curt Valentin, who handled “degenerate” works of art. A Dusseldorf dealer bought the work from his gallery in 1955.

Hartwig Fischer, the director-general of Dresden’s State Art Collections, said: “After 1949, the museums in East Germany were only able to make up for the losses incurred through the National Socialists’ 1937 confiscation of so-called degenerate art in a somewhat piecemeal fashion. They were largely shut out of the international art market.”