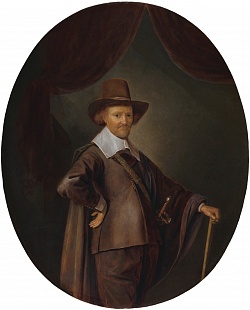 Gerrit Dou, Portrait of a Gentleman with a Walking Stick, c.1645

The US owner of a Dutch Golden Age painting, which he wants to sell, has rejected a restitution claim made by the heirs of Richard Semmel, a wealthy German-Jewish textile factory owner. Semmel’s heirs argue that he was forced to sell Gerrit Dou’s Portrait of a Gentleman with a Walking Stick (around 1645) in 1933.

We can reveal that the painting by Rembrandt’s pupil, once believed to depict Rembrandt’s father, is owned by Thomas Kaplan, who bought it in 2006 from the Amsterdam-based dealer Salomon Lilian. Kaplan wants to deaccession it fr om his Leiden Collection in New York, to upgrade his pictures.

The Dou, worth around £800,000, was offered by Salomon Lilian at London’s Frieze Masters art fair in October 2014. As part of its due diligence vetting, the Art Loss Register flagged up a possible spoliation claim fr om the Semmel heirs.

Semmel left Berlin soon after Hitler came to power in early 1933. He moved to the Netherlands to avoid persecution and brought out most of his art collection, selling many paintings later that year in Amsterdam. Salomon Lilian, who is acting as Kaplan’s agent (and declined to reveal the owner’s identity), argues that newly discovered archival material shows that Semmel’s sales of works in Amsterdam in 1933 were voluntary.

Semmel had sold the Dou at an auction in Amsterdam on 21 November 1933, wh ere it fetched 5,000 guilders. The portrait went to Bastiaan Geus van den Heuvel and later to Jan Baan, who sold it to Salomon Lilian in 2006 (it then passed to Kaplan).

Lilian said: “Our research shows that the 1933 auction was not a ‘forced sale’ because Semmel had the collection outside Nazi Germany. He could decide whether he wanted to sell his pictures and what to do with the proceeds.” According to Salomon Lilian, Semmel’s main motive in selling was to repay a debt related to his textile business, which had been in trouble before the Nazis came to power. Lilian plans to post the documentation online this month.

In 1941, Semmel moved to New York, wh ere he died in 1950. His heir was Grete Gross-Eisenstädt, a friend who looked after him. The claim for the Dou is now coming from Gross-Eisenstädt’s descendants. Their Zurich-based lawyer, Olaf Ossmann, says that it was a “forced sale”. He points out that this view has been accepted over claims for other Semmel pictures in the Netherlands and elsewh ere.

A mixed history of retribution claims

A number of earlier claims by the Semmel heirs have proved successful, although this was before all the documentation was available to owners. In 2013, the Netherlands Restitution Committee concluded that the 1933 sales were “involuntary, provoked by circumstances that were directly related to the Nazi regime”. Although recommending against the return of two major paintings, it did call for restitution of a lesser work, River View with Mooring, by Maerten Fransz van der Hulst, from the Groninger Museum in Groningen.

In 2014, the National Gallery of Victoria, Melbourne, restituted a former Semmel-owned portrait until recently attributed to Van Gogh, Head of a Man. The Van Gogh Museum in Amsterdam regards this as a misattribution.

In two cases, Semmel’s heirs reached agreement with owners who wished to sell paintings that had been sold in 1933, a Renoir and Gauguin sold at Christie’s in 2012 and 2014 respectively.