These Four Assumptions Are Perpetuating the Sale of Nazi-Looted Art 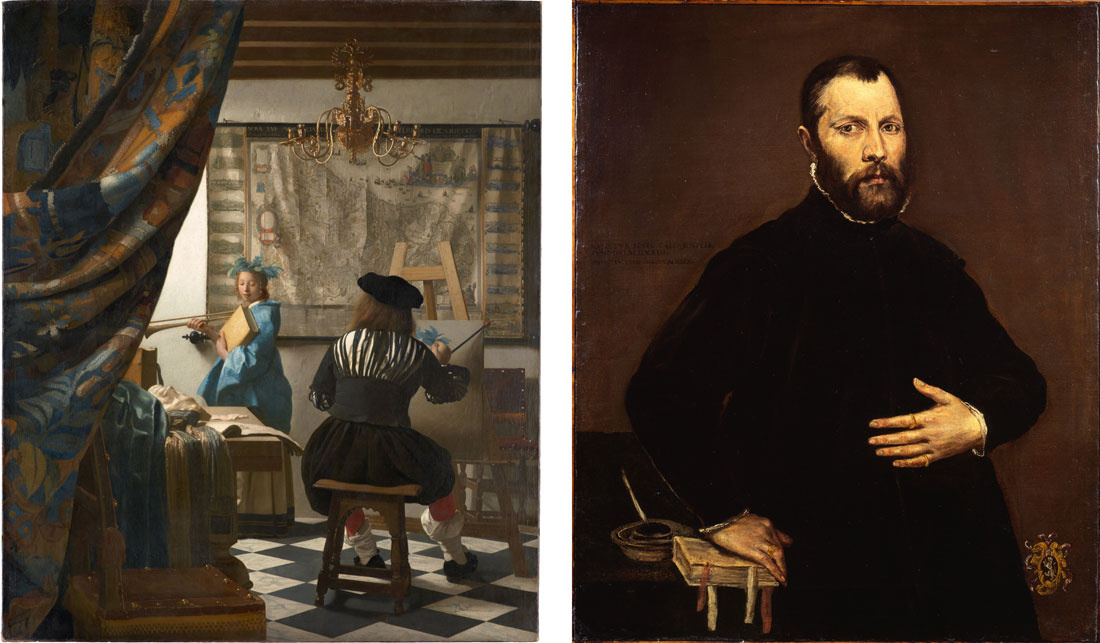 Left: Jan Vermeer, The Art of Painting, 1666–1668. Collection of the Kunsthistoriches Museum, Vienna. Image via Wikimedia Commons; Right: El Greco, Portrait of a Gentleman, 1570. Image courtesy of the Commission for Looted Art in Europe.

Last month, at the first Conference of the German Lost Art Foundation, experts gathered at the Jewish Museum in Berlin to discuss the complex subject of provenance research and restitution of Nazi-looted art. It is not possible to quantify exactly how much art was looted across Europe before and during World War II, but “estimates suggest that it might have been as much as 20% of all art to be found within the territories that were occupied,” says Friederike Schwelle, Manager of Provenance Research and Restitution at the Art Loss Register. “It is just as difficult to say how much might still be missing but it is likely to exceed 100,000 items.” Needless to say, the problem has been and remains one of the most complex issues to beset the art market.

“It’s surprisingly easy to sell Nazi-looted art without being detected,” says Catherine Hickley, author of The Munich Art Hoard, Hitler’s Dealer and His Secret Legacy, a book published this fall by Thames & Hudson about Cornelius Gurlitt’s collection of 1,280 artworks seized by German police in Munich in February 2012. “The Gurlitts had no need to be surreptitious about selling their art by resorting to backstreet dealers,” she adds.

The art market remains notoriously opaque, secretive, and unregulated, and therefore a safe environment for exchanging works without a clear backstory. Too often, buyers do not conduct sufficiently thorough provenance research prior to making a purchase—not even for the years between 1933 and 1945. Why does this continue to occur? Often because buyers are mislead by a few dangerous assumptions.

The work is for sale at an auction house

Aside from a few exceptions like Christie’s and Sotheby’s, auction houses tend not have in-house teams focused on identifying artworks that may have been looted or are the subject of an ownership dispute. Provenance research is a very time-consuming task that requires expertise, and few auction houses dedicate funds and resources to it. Some delegate the searches to the Art Loss Register, which does a quick routine check to make sure that a given lot has not been registered in its database of stolen and looted items. However, as extensive as the ALR database may be, it does not include every missing object.

Numerous are the instances when major auction houses accepted looted artworks. Take, for example, Lion Tamer–Circus (1930), a gouache and pastel work on paper by Max Beckmann that was sold by Cologne-based Lempertz for €871,000 in 2011. Had the lawyer of Michael Hulton (the heir of Jewish art dealer Alfred Flechtheim, who was persecuted by the Nazis) not spotted the work in Lempertz’s catalogue, the proceeds of the work’s sale would have gone in their entirety to Cornelius Gurlitt, who consigned the work. Instead, Gurlitt decided to share some of the profits with Flechtheim’s heirs. Auction houses rarely disclose the identity of a lot’s consigner without the consigner’s permission, and “too often return disputed works to a consignor when a red flag is raised,” rather than take further action, says Hickley. Thus, “a piece of Nazi plunder vanishes back into the darkness it come from, unattainable and untraceable until the next time it comes to the market.”

The work is sold by a well-known dealer

Buying from a reputable art dealer is also not necessarily a guarantee that a work wasn’t plundered. Nazi-looted artworks have been sold by well-known galleries and even made it through vetting committees and into major art fairs. In March 2014, for example, El Greco’s Portrait of a Gentleman (1570) was exhibited at The European Fine Art Fair (TEFAF) in Maastricht, a very prestigious art fair with a famously rigorous vetting process. It was ultimately returned to the heirs of its wartime owner, Julius Priestert, a Viennese industrialist.

This past November, a judge blocked the sale of two works by Egon Schiele, Woman in a Black Pinafore (1911) and Woman Hiding her Face (1912), after papers were filed in the New York Supreme Court by lawyers acting for the heirs of Fritz Grünbaum. The pair of paintings were discovered while on offer in the booth of the London art dealer Richard Nagy at The Salon Art + Design fair at the Park Avenue Armory.

The work was exhibited in a museum

Belonging to an institutional collection or having hung in a museum exhibition certainly can add to a work’s value, but it does not mean the property wasn’t once looted. As Christopher A. Marinello, CEO of Art Recovery International, explains, “While the Washington principles of 1998 committed museums to conducting provenance research, these principles are not binding and only a few museums have completed a thorough investigation of their collections.”

The process of thoroughly researching an entire collection’s provenance can be a serious expense—one that is sometimes prohibitive. However, museums also tend to staunchly defend their collections, especially when a disputed work is one of their top attractions. Maria Altmann waged a notoriously difficult fight with the Austrian government in order to get back five family-owned paintings by Gustav Klimt from Vienna’s Belvedere. Among them was Klimt’s extraordinary Portrait of Adele Bloch-Bauer I (1911), which sold for $135 million dollars to Ronald S. Lauder and now hangs in the Neue Galerie in Manhattan, which the collector helped found.

Less successful was the claim of the heirs of Count Jaromir Czernin of Vienna, the previous owner of Johannes Vermeer’s The Art of Painting (ca. 1665–68). Since the end of World War II, the heirs have been attempting to recover this masterpiece, which is currently housed in the permanent collection of the Kunsthistorisches Museum, Vienna.

Another case asserted that three George Grosz paintings in MoMA’s collection had been stolen by Nazis. The museum purchased the works in 1952 from Curt Valentin, a Jewish German emigrée who opened a New York gallery that had, at one point, sold so-called “degenerate art,” and then transferred the profits back to Nazi Germany. And the Tate Gallery in London delayed the return of Beaching a Boat, Brighton (1824) by John Constable, and contested the claim filed by the heirs of a Hungarian Jewish collector who was once the owner. The list goes on.

The work has a certificate from the Art Loss Register

The internet and online databases are making it increasingly difficult for the sale of looted art to go undetected, but there is still no single, global database that is complete. One of the world’s largest art databases, the Art Loss Register, issues certificates for artworks that have not been registered on its website as stolen or as the subject of a dispute. But since the database is not comprehensive, a certificate does not mean a work has not been looted.

Also, researchers can make errors, especially when a work’s attribution changes over the years, as often happens with Old Master works. In the case where a title or artist name may have changed, a keyword search might not produce accurate results. This is complicated by the fact that photographs of some works are not available to facilitate the search. “Many artworks listed on public databases such as www.lostart.de in Germany are sold on to other owners regardless,” says Hickley.

How can buyers protect themselves?

While waiting for current practices to improve through increased communication, collaboration, and technological implementations, there is something buyers can do. The experts agree: it’s crucial to be able to prove that due diligence was done prior to the acquisition. The law protects “good faith” buyers. It is therefore essential to do as much research as possible and maintain extensive documentation of that process.