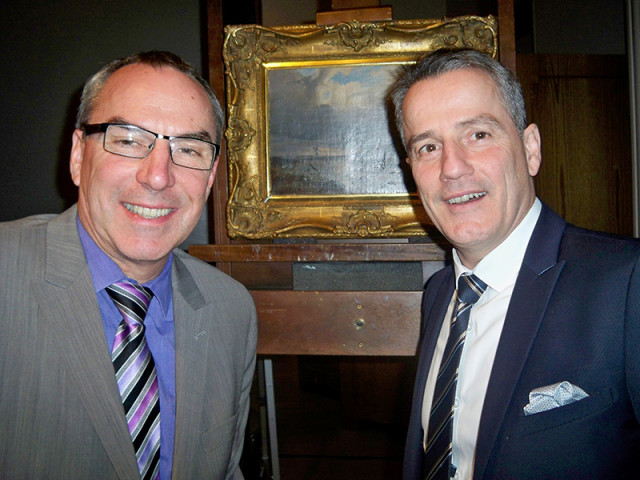 The Sûreté du Québec (SQ) is now in the hunt for Nazi-looted art.

The provincial police force has taken over the files from U.S. law enforcement on the Max Stern Art Restitution Project.

This means it will be the SQ, rather than the U.S. Department of Homeland Security, that interfaces with Interpol in the ongoing worldwide search for the hundreds of artworks the late German-born Dominion Gallery owner was forced to hand over to the Nazis in the 1930s.

Clarence Epstein, director of the Concordia University-based project, said a Canadian law enforcement unit makes more sense, given that the Stern estate and its three beneficiaries – Concordia, McGill University and the Canadian Friends of the Hebrew University (CFHU) – are in this country.

Because of its expertise, the SQ handles art crimes investigations for all of Canada, he added.

While the Quebec force will not be investigating the whereabouts of the Stern art, it is now “the first point of contact” for other Interpol affiliates on this matter, Epstein explained.

Two officers from the SQ’s economic crimes section, leader Lt. Alain Gaulin and Sgt. Alain Dumouchel, an artworks investigator, were on hand at an event held by the CFHU at the Montreal Museum of Fine Arts (MMFA) on Nov. 23 to pay tribute to project’s work.

For the SQ, there is no statute of limitations on theft, unlike in Germany, where such a law continues to hamper the restitution of what are believed still to be a significant number of works from the Stern collection, Epstein said. Thanks to this protection, German private collectors and auction houses continue to generally be unco-operative in Stern estate claims.

Stern, who ran an art gallery in Düsseldorf before World War II, lost more than 400 works after the Nazis forced him out of business because he was Jewish. The final 200 were liquidated at a forced sale at Cologne’s Lempertz auction house in 1937, after which Stern fled to England.

Despite his efforts, Stern himself only got back a limited number of works, thanks largely to the Canadian armed forces.

The project, which was launched in 2002, has grown into a global quest involving numerous parties in the art and legal spheres in Canada, the United States, Europe and elsewhere, Epstein stressed.

A total of 12 paintings have been recovered to date, the first in 2006. The 11th, the 1837 Scandinavian Landscape by Andreas Achenbach, was returned in 2013 to the Stern estate by an unidentified consigner after it was put up for auction in Germany.

The small, but valuable, work had remained in storage in Berlin until very recently, when the MMFA asked if it could borrow it, and it was on view at the event.

The most recently recovered is a self-portrait of the 19th-century Wilhelm von Schadow, which the City of Düsseldorf restituted last year. The painting is now on loan to the Düsseldorf City Museum, where it has been on display for several decades.

The museum, with the collaboration of Concordia, is planning for 2018 a major exhibition dedicated to Max Stern (1904-1987) and the Galerie Stern, which was founded by his father Julius.

The MMFA is also currently showing Franz Xavier Winterhalter’s 19th-century masterpiece Girl From the Sabine Mountains, restituted in 2008, but only after a legal battle. Its elderly possessor, a German baroness living in Rhode Island who had inherited it from her father, went to court to keep it.

Not only did the Stern estate win the case, but the ruling set a legal precedent in the United States. A Federal Court established that art that its owners sold under duress from the Nazis is stolen property and allows law enforcement agencies to seize such property on U.S. soil.

That was how the project’s database came under the purview of Homeland Security. The project, however, continues to work closely with the New York State Holocaust Claims Processing Office.

Six of the 12 recovered pieces have been sold, Epstein said, with the proceeds going back into the project, which will carry on indefinitely. Others are on loan to museums in the Netherlands and Germany.

Besides seeing justice done, the project’s aim is educational: raising awareness about Nazi-looted art and, more broadly, the Holocaust.

A documentary film about Nazi-plundered art, focusing on Stern’s story, is now in production in Canada at the initiative of the CFHU and the project.

Directed and written by Phyllis Ellis, Stolen is to be shown around the world through Hebrew U’s Vidal Sassoon International Centre for the Study of Anti-Semitism, said Sissy Federer, one of the film’s executive producers.

Subtitled The Last Prisoners of War, the film will bring attention to the fact that most of the 650,000 artworks confiscated by the Nazis have not been restored to their rightful owners.

Stern was a generous benefactor of the MMFA during his lifetime, noted Iris Amizlev, curator of world cultures and intercultural programs, donating more than 50 works there, including the large Henry Moore sculpture on view at the event.