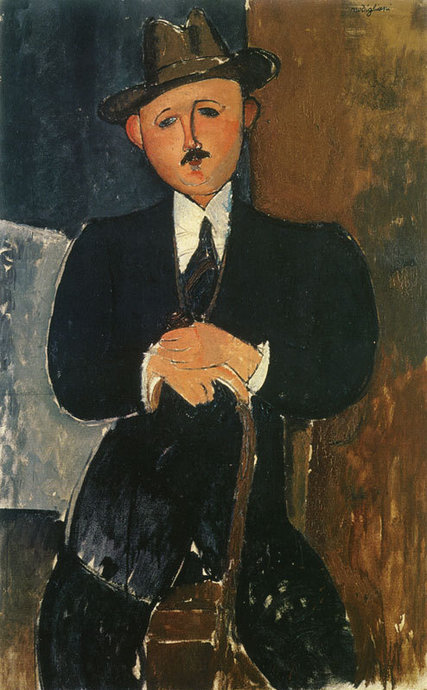 In a fresh legal complaint filed on Tuesday, the estate of a Paris art dealer is seeking the return of a precious Modigliani portrait said to have been seized by the Nazis and now, the court papers contend, in the possession of the Nahmad family, a dynasty of art dealers that wields enormous power in the international art market.

The action against the Helly Nahmad Gallery and others, filed in New York State Supreme Court, is the latest effort by the dealer’s grandson to secure the handover of the 1918 painting, “Seated Man With a Cane,” which is valued at more than $25 million. Earlier this year a judge in the same court ruled that the grandson, Philippe Maestracci, a French resident, lacked standing to press his claim in the United States.

In the refiling, Mr. Maestracci’s claim is now being pursued by the New York administrator for the estate of the gallery owner, Oscar Stettiner, a Jewish dealer of British nationality. Mr. Stettiner had sought to reclaim the Modigliani painting after the war before dying in France in 1948, according to documents submitted to the court.

In the years since, Mr. Maestracci, 71, and his lawyers have faced numerous obstacles in their own quest to recover the painting, including determining the origins of the International Art Center, the corporation that now owns the portrait.

The lawyer for Mr. Maestracci and the estate administrator contend that the International Art Center is nothing more than a shell company for the Nahmad family and its London and New York galleries.

“This is one large enterprise that is a scheme to move these things around, and they are all alter egos for one another,” Joel M. Aurnou, a lawyer for the estate administrator, said in an interview on Tuesday. “It’s all one operation.”

But the Nahmad Gallery has said it has no control of or ownership stake in the International Art Center, which bought the painting at auction in 1996.

Aaron Richard Golub, a lawyer who represents the Nahmad family and the International Art Center, dismissed the latest complaint as a “case that has no substance whatsoever.” He said it was being driven by Mr. Maestracci’s advisers, whom he characterized as business people who specialize in tracking down art to make restitution claims. He also said he was not convinced that Mr. Stettiner ever owned it.

“We are confident that this case will be dismissed,” he said.

Mr. Golub declined to say who the principals of the International Art Center were, saying it was irrelevant to the case.

The legal wrangling dates to 2011, when Mr. Maestracci sued the Nahmad Gallery in federal court for the return of the painting. He later withdrew the suit.

In the new court papers, Mr. Maestracci’s lawyer says the International Art Center has no employees and was formed in Panama by a lawyer listed as a company director for that corporation and at least 11,000 other companies. But the lawsuit says that Nahmad Gallery employees prepared invoices and documents for the corporation and instructed New York clients to make payments directly in the name of the corporation in Geneva.

Today, the painting rests in a warehouse in a Geneva freeport, the largely tax-free storage depots where wealthy collectors store many of their treasures for an unlimited period of time.

The suit contends the Nahmad family enterprise, including the artworks in the freeport, are controlled by David Nahmad, the family patriarch, who lives in New York and Monaco. The family galleries and International Art Center regularly mingled activities, the court papers say, and Nahmad Gallery employees offered to take clients to Geneva to sell art that was purportedly owned and stored by the corporation.

The portrait first moved to the freeport in 1997, a year after it was purchased at Christie’s in London, according to Mr. Golub. He said it has appeared for brief periods in New York totaling seven months over almost a 20-year period. It last surfaced in New York in 2008 during an unsuccessful attempt to sell it at Sotheby’s.

Mr. Golub has said the International Art Center bought the painting in good conscience from a reputable auction house.

According to the court filing on Tuesday, Mr. Stettiner fled Paris in 1939 without his gallery stock of art and antiques and they were taken over by a temporary administrator appointed by the Nazis to oversee the gallery in 1941. Three years later, the painting was sold at auction by the Hotel Drouot, and it was then resold in a series of transactions, the suit says. In 1946 Mr. Stettiner filed a civil claim for a portrait of himself as a child, a pile carpet and “a Modigliani portrait of a man,” according to French court documents submitted as part of the lawsuit.

But he was never able to locate any of them.

The portrait and the historical information was tracked down by James Palmer, whose company, Mondex, specializes in the recovery of looted art for heirs. Mr. Palmer said that Mr. Stettiner had owned only one Modigliani and that the portrait was tied to Mr. Stettiner through letters the dealer wrote when he lent it for display at the 1930 Venice Biennale, which listed it in its catalog.

Mr. Palmer represented other branches of the Stettiner family in an unrelated claim filed to a Netherlands restitution committee for “Old Man With a Beard,” a 17th-century painting by the Dutch artist Salomon Koninck that was recovered after the war and handed over to the government of the Netherlands. The committee rejected the Stettiner family’s claim this year.

In a news release detailing its decision, the committee said it did not find the claim highly plausible, partly because it had located no French documents reporting that the painting had disappeared and the panel could not determine a clear record of ownership.

Mr. Palmer said there was no confusion over whether the Modigliani portrait is the same one cited by Mr. Stettiner in his legal claim after the war.

“The evidence is clear that it’s the same painting,” he said.