Sand Hills, a painting by German artist Ernst Ludwig Kirchner, handed back to the Fischer family after MoMA recognised that it was stolen by the Nazis

The New York Museum of Modern Art (MoMA) has returned a painting stolen by the Nazis to the heirs of its rightful owner, after a decade-long dispute.

Ernst Ludwig Kirchner’s vivid yellow, red and black Sand Hills – featuring jagged brush strokes deemed as degenerate by the Nazis – was left behind by Max Fischer when he fled Germany for the US in 1935.

Fischer, an author, was deeply saddened to have left the art work behind. He and his brother had inherited a collection of art, The Ludwig and Rosy Fischer collection, widely seen as one of the most important collections of expressionist art assembled in pre-Nazi Germany. 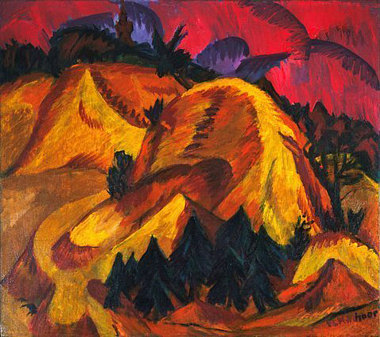 Jonathan Petropoulos, author of The Faustian Bargain: The Art World in Nazi Germany, has said that the museum’s founding director, Alfred Barr, acquired pieces confiscated or stolen by the Third Reich.

MoMA bought the painting in 1949 from a New York gallery. They did not think anything of it, until they began creating a database of art works that had changed hands in the chaotic years of the war. When they did, they discovered that Sand Hills had once belonged to Fisher.

David Rowland, a lawyer for Fischer’s descendants, first approached the museum in 2004.

"Max Fischer and his brother Ernst inherited this incredible collection, but Max Fischer lost a good part of this inheritance when he fled Germany in 1935,” he said.

His claim was initially dismissed because there was confusion over which painting Fischer owned. Eventually, after painstaking research, Sand Hills was proved to have belonged to the Fischer family.

“MoMA’s professional handling of this matter, cooperation in sharing research, analysis of complex historical information, and ultimate restitution of this Kirchner artwork is an example of museum best practices in the handling of Nazi-era art claims," said Mr Rowland.

"The heirs of Max Fischer are grateful to MoMA for their return of this important artwork."

MoMA said it was happy to return the work to its rightful owner. Some of Kirchner's paintings of Berlin street scenes have been sold at auction for $38 million.

“There’s no sense of loss,” said Glenn Lowry, the museum’s director. “It feels like we’re doing the right thing.”

The search for looted art has been turned into a George Clooney film, The Monuments Men, and in 2013 headlines were made around the world when Cornelius Gurlitt, the son of art historian and dealer Hildebrand Gurlitt, was found to have a stash of over 1,300 paintings in his Munich flat. Many of them were believed to have been stolen under the Nazi regime.

In 1998 a total of 44 nations – including the United States – signed the groundbreaking Washington Principles on Nazi-Confiscated Art, meaning governments and museums have had to recognise a special responsibility to try and return looted art stolen from Jews under the Third Reich.

MoMA says it owns approximately 800 paintings created before 1946 and acquired after 1932, that were or could have been in Continental Europe during the Nazi era. A special team is studying whether they should be handed back, the museum said.

Some galleries and museums have been criticised for being reluctant to fully investigate the provenance of their art.

Most US museums are private rather than government-owned, so they do not have to make public a list of the works they hold.

People who suspect an American museum of holding looted art must go through the courts, which usually support the claims of the possessors of the artwork, experts say.

Several museums, including the Detroit Institute of Arts, the Toledo Museum of Art in Ohio, the Museum of Fine Arts in Boston and the Guggenheim Museum, have taken legal measures to have themselves declared the rightful owners of works, before anyone else could claim it.

It is thought that at least 100,000 works of art stolen by the Nazis are yet to be returned to their rightful owners.