As readers know, my clients Alan Philipp and Gerald Stiebel sued the Federal Republic of Germany and the Stiftung Preussischer Kulturbesitz (SPK) in February for restitution of the Guelph Treasure (or Welfenschatz as it is known in Germany), assisted by my co-counsel Mel Urbach, Esq. and Markus Stötzel of Marburg, Germany.  As my co-counsel speak to an event tonight hosted by Congresswoman Grace Meng on the anniversary of Kristallnacht, an event inextricable to the persecution of Jews in Europe, Germany’s response to the Complaint advances a stunning revisionism about the Holocaust and the international commitments that Germany has made.  While paying lip service to the seriousness of Jewish suffering, the papers filed in court are nothing less than an attempt to move the goalposts to exempt a historical period from responsibility about which there can be no serious debate.  Independent condemnation was not far behind the filing. 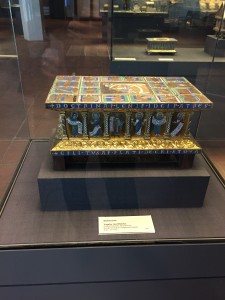 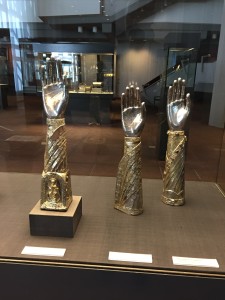 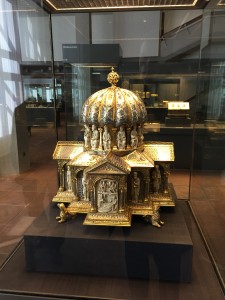 To review, the Welfenschatz was sold under duress by my clients’ ancestors, a consortium of art dealers, in response to a scheme orchestrated by Hermann Goering, who was not only a war criminal and a murderer, but also the pre-eminent looter of art (usually under the pretext of a “sale”) in occupied Europe, if not ever.  In its latest response, the Federal Republic and the SPK move to dismiss the case by contesting the jurisdiction of the U.S. courts in a variety of ways that my clients are confident will fail, and the case will be allowed to proceed.  This tactic was largely expected, if disappointing.  My clients will respond to the 85-page motion as the court’s procedure provides, and address its various arguments that essentially ignore the last 10 years of Holocaust art restitution legislation (particularly as to jurisdiction).

What was stunning, however, were a number of other positions.  The motion does not merely argue that the transaction at issue was ”fair” on its own terms, a tactic that the SPK has employed before.  Now, Germany and the SPK have made a claim so shocking that it speaks for itself: “the alleged taking of the Welfenschatz in 1935 predated the Holocaust by several years.” (emphasis added).  Then further, “the German government of Prussia indisputably spent money to obtain the collection.  []  The Welfenschatz was not then sold again for profit, but has remained in the possession of German entities and on display for the general public’s education and enjoyment to this day.”

Merriam Webster defines “several” as “more than two but fewer than many.”  Reaction to these revisionist statements has been swift, and harsh.  In The Jewish Week (emphasis added):

“In 1935 the Nuremberg race laws [were promulgated] and before that there were organized boycotts of Jewish establishments and violence against Jewish people on the street. Jews were forced from their jobs and they lost their rights. … Although what they are saying is technically correct — that the Shoah [Holocaust] did not happen until World War II — the idea that that constitutes a legitimization of what was done to German Jewish citizens from 1933 on is grotesque and beneath contempt.”

Rabbi Cooper added: “At a time when there is so much Holocaust revision, one of the most reliable allies we have had about the historic truth was Germany. It is beyond the pale that such an argument would actually be put down on paper in the name of Germany. … It should be stricken from the record.”

The idea that the Holocaust did not start until “several years” after 1935 is indefensible.  Jewish victims of Nazi terror from the moment Hitler took power in 1933, and those placed and murdered in Dachau in 1933, would certainly beg to differ.  Those afflicted by the Nuremberg Race Laws of 1935—which the mayor of Frankfurt went out of his way to enforce before they were actually law—would likely disagree.  And until this, one would have expected Germany and any sentient person to agree that the organized violence and murder against German Jews seventy-seven years ago today (November 9, 1938)—Kristallnacht—was part of the Holocaust.

Germany could have made its tone-deaf economic argument about the transaction without this Holocaust revisionism.  It did not have to insult the memory of the Nazis’ victims.  As an aside, it is revealing that Germany contends that the public display of this looted art since the victimization of its owners has any bearing on the substance of that persecution.

This shift can no longer be seen as a coincidence.  Quite apart from the Welfenschatz claim, readers will recall this year’s decision by the Advisory Commission in Germany against the heirs of George Eduard Behrens from Hamburg on those heirs’ claim to Pariser Wochentag (Paris Weekday) by Adolph von Menzel.  In recommending against restitution, the Advisory Commission carried the rose-tinted thread that underlies the Welfenschatz response: “Jewish private banks were hardly affected in the early years of the Nazi regime in their business” and “Jewish banks experienced an economic boom.”  (both emphases added).  These sentences would be comically absurd if they didn’t now reflect in hindsight what appears to be a disturbing change of attitude in the German government.

Further, Germany and the SPK argue in the recent motion that the claims are barred by the statute of limitations.  Germany, the very nation that perpetrated the Holocaust, cannot seriously assert in equity that its crimes were too long ago for recompense.  But even without any apparent moral scruples, Germany is legally wrong.  Worse yet, its press release accompanying the motion makes absolutely clear that Germany knows perfectly well that it has violated its international commitments in asserting the statute of limitations.  The Washington Principles on Nazi-Looted Art, to which Germany was a founding signatory, commit the member states to secure fair and just resolution of claims on the merits, not on technical defenses that avoid the substance.  The assertion of the statute of limitations is fundamentally at odds with that commitment.  Yet the SPK’s defensive press release states:

In other words, Germany will be happy to follow the Washington Principles—so long as it is done in a forum and in a manner of Germany’s choosing.  Otherwise, all bets are off.   The mere fact that Germany is so worried about the issue that it needed to provide an excuse shows that it is fully aware of just how wrong it is.  And this is out of both sides of the defendants’ mouth anyway; the motion repeats the canard that the 2014 Advisory Commission mediation “adjudicated” the property rights, when that commission has no such authority (as Germany strenuously insists when it suits) and which issued a recommendation and nothing more.  The SPK itself well knows this: the Advisory Commission recommended against the restitution of the Hans Sachs poster collection in 2007 from the Deutsches Historisches Museum—a museum run by the SPK (text in German).  Yet even after the claimants “lost” that case, they sued the SPK and won restitution.

Lastly, the motion argues that my clients are not the proper plaintiffs.  My client Alan Philipp, for example, is the son of Lucie Ruth Hackenbroch, whose father Zacharias was one of the consortium members.  Zacharias did not escape Germany alive, but Lucie did.  The Nazis added insult to injury after her father’s death of stripping her of German citizenship.

Similarly, Mr. Stiebel is the great nephew of Isaac Rosenbaum and nephew of Saemy Rosenberg.  Rosenbaum and Rosenberg did manage to escape Nazi Germany and eventually found their way to New York.  The remaining interests in the consortium are covered by various agreements, all known to the SPK.

The idea that anyone other than Mr. Philipp or Mr. Stiebel would or should bring this claim is offensive.  The number of Aryanized companies in Nazi Germany are almost beyond counting; no one contends in good faith that their owners are not the proper claimants for that victimization.  The alternative contention in the motion that a fictional German corporation (of which there is no evidence, because there was none) similarly Aryanized out of existence would be the proper plaintiff is just bizarre.  To suggest that the victims of Nazi persecution’s rights are limited to the corporate interests that they held is, like so much about the recent filing, astonishing.

Germany could and should have done the right thing a long time ago.  My clients remain committed to seeking justice and recognition for the persecution of their ancestors.  Germany’s latest response is cause for shame and condemnation.