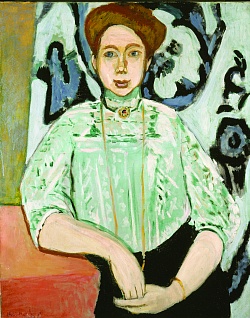 The National Gallery in London has rejected a claim for a portrait by Matisse that survived the bombing of Germany during the Second World War. The descendants of the sitter, the artist Greta Moll, argue that the work was misappropriated after being entrusted to a family friend who took it fr om the Soviet zone of Berlin to Switzerland in 1947.

The National Gallery bought Portrait of Greta Moll (1908), an important work by the artist, in 1979. A spokeswoman for the gallery says: “We have good title to the picture.” The work has been on long-term loan to the Tate since 1997. It was on display at Tate Modern until September (as a work from 1908, it is now considered more appropriate for it to be with the Tate’s 20th-century collection) and is now temporarily in storage.

The New York-based lawyer David Rowland is acting for Moll’s heirs and has submitted a formal demand for the return of the work. If it is not returned, “the Moll family will file suit against the National Gallery and the United Kingdom for its return in an appropriate court”, Rowland says, adding that the UK’s Spoliation Advisory Panel should consider the claim. However, the panel’s mandate covers only the Nazi era (1933-45), so a loss from 1947 would fall outside its jurisdiction.

Entrusted to a friend

The fate of the painting in the aftermath of the Second World War is a complex saga. In 1937, Moll and her husband Oskar, who were both artists (and not Jewish), faced condemnation by the Nazis for producing “degenerate” work. They survived the war, although their house in Berlin was bombed. In early 1947, they decided to move to Wales, wh ere one of their daughters was living, but Oskar died that August.

The portrait, which they had treasured for nearly 40 years, was Moll’s only possession of any value. Based in Berlin’s Soviet zone, she feared that she would be refused an export licence for the painting to go to the UK. She therefore entrusted it to a friend, Gertrud Djamarani, who was travelling via Switzerland to join her husband in Iran. Djamarani agreed to take the work to a dealer in Zurich, believed to be Heidi Vollmöller.

Djamarani found herself in difficulties in Switzerland because the authorities stopped her and her young child from travelling to Iran. She ran out of money and borrowed some from the dealer, leaving the portrait as collateral. The dealer apparently later sold the work. Moll’s two daughters, Brigitte and Melita, believe that in the late 1940s, their mother tried to recover the painting from the dealer and contacted the Swiss authorities, but to no avail.

In 1979, the work surfaced at the National Gallery in London, two years after Greta’s death. Her daughters had only limited information about the events of 1947 and were concerned about the complications of pursuing a legal claim. Little was done until a few years ago, when Rowland took on the case.

Moll’s descendants will now have to decide whether to pursue civil legal action. They would face two problems: producing sufficient factual evidence about the 1947 loss, and their failure to initiate action when they learned of the 1979 acquisition of the work.

The case raises concerns about why the gallery did not ask questions in 1979 about how the portrait had left the Moll family. Although there was, at that time, much less concern about Nazi-era spoliation than there is today, the institution should still have asked more about why the portrait was sold in the turbulent 1940s, if only to ensure that it was acquiring good legal title.


Greta and Oskar Moll were among Matisse’s five pupils when he started to give painting courses in his Paris studio in 1908. Oskar commissioned Matisse to paint a portrait of his 23-year-old wife. The couple became close friends of Matisse in the period before the First World War. In 1949, the portrait was acquired by the New York-based dealer Knoedler (jointly with Fine Arts Associates), which sold it to Sarah Blaffer, the daughter of the founder of the Texaco oil company. The painting later went to an anonymous Swiss collector. In 1979, the National Gallery bought it from the London-based dealer Lefevre. Most of the £450,000 cost was met through government grant-in-aid.