Paintings stolen by Nazis still hang in Canadian galleries. Paltry government funding is hampering efforts to identify and return them 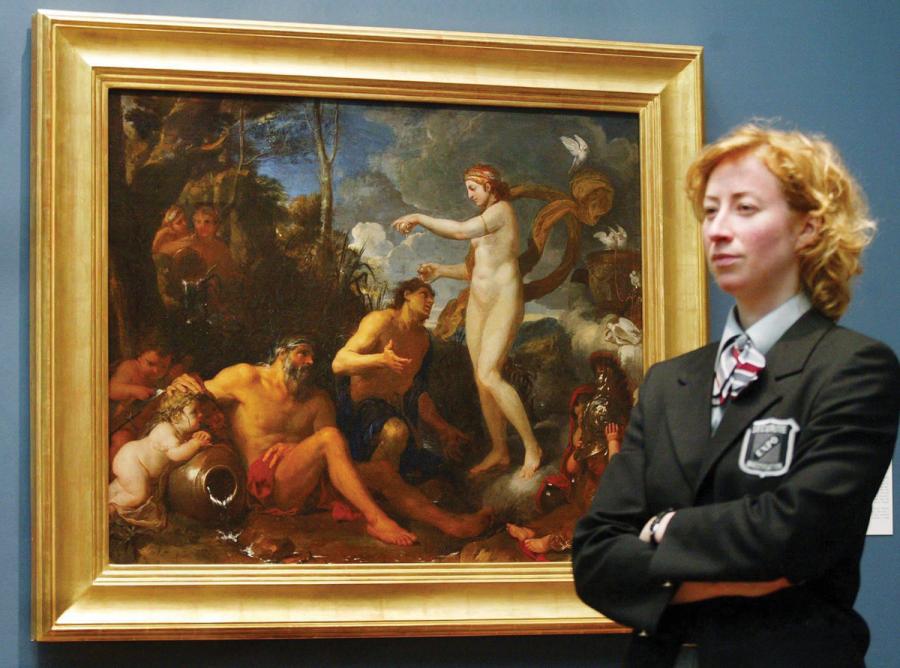 A security officer at the Montreal Museum of Fine Arts stands next to 'The Deification of Aeneas' by artist Charles Le Brun in 2005. The heir of a Jewish art collector says the Nazis looted the painting from her family in 1940. Photo by Gordon Beck/Montreal Gazette/The Canadian Press

On Feb. 28, 2012, German investigators entered a fifth-storey apartment in a drab low-rise in an affluent neighbourhood of Munich. There, they made a startling discovery: 1,406 paintings by artists such as Picasso, Chagall and Matisse stacked alongside piles of detritus and rotting food. Many of these works had been stolen from Jewish owners in the 1930s and ’40s and acquired by Hildebrand Gurlitt, an art dealer permitted by the Nazis to sell confiscated works in styles Hitler considered “degenerate.” The collection, which is now estimated to be worth over one billion euros, had been hidden away by Gurlitt’s son, Cornelius, a reclusive octogenarian who never worked or paid taxes but simply relied on the occasional sale of artworks to fund his modest lifestyle.

In 2012, the works were seized, but there is no German law requiring the restitution of the objects. The seizure may even have been a violation of Cornelius Gurlitt’s constitutional property rights. German authorities kept the discovery a secret until it was leaked to the media in 2013. Since then, a handful of works have been returned, and approximately 500 have been added to the Lost Art Internet Database. In keeping with the will of Cornelius Gurlitt, who died last year, the collection is slated for the Museum of Fine Arts Bern in Switzerland, which has expressed an ongoing commitment to conduct provenance research and restitute any looted works.

The discovery of the Gurlitt stash drew international attention to Jewish assets that had been looted by the Nazis. During the Holocaust era, millions of objects were confiscated; while some were destroyed, many were sold into the art market. Through sales and donations, some stolen artworks entered Canadian collections.

Hundreds of works held by Canada’s public cultural institutions have gaps in their provenance, or history of ownership. A blurry past doesn’t necessarily indicate that a work was stolen, as most uncertainties are likely the result of poor record keeping. However, this must be verified; the presence of potentially looted objects perpetuates the legacy of the Holocaust era. “We can’t undo the war, the horrendous ravages and ghastly things that were done, but there are things that we can do, and this is one of them,” says Lloyd DeWitt, curator of European art at the Art Gallery of Ontario. “It’s a little thing that respects the memory of those who were spoliated and the injustices that were done.”

In 1998, Canada was one of 44 countries that established the Washington Conference Principles on Nazi-Confiscated Art, a set of 11 non-binding principles for resolving issues resulting from the theft of assets during the Holocaust era. All countries present expressed their commitment to providing resources to aid restitution work, as well as to collaborate in an international effort.

These goals were admirable, but there was minimal action. Followup conferences, including a 2001 Canadian symposium at the National Gallery of Canada in Ottawa, gave the impression that a national strategy was in the works, but more than a decade later, there was still no co-ordinated effort.

In spring 2013, Canada began its term as chair of the International Holocaust Remembrance Alliance, and the federal government announced the Canadian Holocaust-Era Provenance Research Project (CHERP). Funding for the project —$190,965 — was divided among six museums: the Art Gallery of Ontario and the Royal Ontario Museum in Toronto, the Winnipeg Art Gallery, the McMaster Museum of Art in Hamilton, the University of Lethbridge Art Gallery in Alberta and the Art Gallery of Windsor (Ont). Though its funding is “paltry,” according to one curator at a participating institution, the program is raising awareness and creating guidelines so that small Canadian institutions can begin Holocaust-era provenance research without the assistance of an expert. Ultimately, the goal is for all works that raise questions to be included in a Canadian Heritage database.

In a dull windowless room at the University of Lethbridge Art Gallery, a space where about 7,000 artworks are stored in beige drawers and black boxes, curator David Smith holds a small framed painting at an angle so that provenance researcher Janet M. Brooke can photograph its back and frame. The backs of paintings often include notes about previous owners, art dealers and exhibitions — clues that can give Brooke a starting point for her investigation.

Holocaust-era provenance research requires expertise that only a handful of Canadians possess. It involves examining the object itself, studying curatorial files, consulting with art experts around the world and combing through databases, archives and lists of looted objects. The challenges are many, such as physical changes made to obscure an artwork’s provenance and the absence of a comprehensive central international database of stolen works.

Canadian curator DeWitt spent many years working in the United States. He notes that many American institutions have dedicated resources to Holocaust provenance research, in part because they’re in possession of more European artwork. In striving to establish galleries that were on par with their European counterparts, Americans acquired many big-name, big-ticket objects — some of which passed through Nazi hands before being displayed in U.S. museums.

In contrast, Canadian institutions focused on promoting a national identity distinct from Europe. Most of this country’s museums employ only one or two curators, whose areas of expertise tend to be Canadian or contemporary art. These curators may not have the skills, knowledge or experience to conduct Holocaust-era provenance research. Until last month, the National Gallery of Canada was the only Canadian institution to have an employee solely focused on this work, but the gallery planned to expand the position to include other tasks.

While CHERP is a step in the right direction, DeWitt hopes it’s only a starting point. “It would be great to have an ongoing commitment from the federal government,” he says.

In some ways, museum curators have it easy: they can’t be criminally charged with being in possession of stolen property (a different standard of liability is often applied to cultural objects), and there is no legal obligation to research the origin of the works or even to return them to their rightful owners. Some museum lawyers argue that objects stolen during major conflicts should remain in galleries due to the statute of limitations. Claimants, on the other hand, are required to prove provenance, a difficult task that entails hiring art historians, researchers and lawyers. Most descendants of Holocaust victims just don’t have the money.

Attitudes toward claimants can get ugly too. While conducting research in the 1990s, DeWitt was appalled to hear people saying the Second World War is “ancient history” and suggesting that descendants of victims are greedy and uninterested in the cultural value of the objects. While attitudes have generally improved, some institutions and individuals refuse to conduct or facilitate Holocaust-era provenance research or to return plundered works.

Marc Masurovsky, co-founder of the Holocaust Art Restitution Project, believes that it should be an ethical and professional obligation for museums to verify the origin of objects in their collections. He points out that most museum visitors would rather see a lawfully owned work than one that may have been stolen.

Museums often decontextualize an object from its provenance and focus on its social context or how it was created, he adds. “It’s as interesting to know how an object changed hands as it is to understand how an object is made,” says Masurovsky. “History is about the past and all the things that happened, good or bad or indifferent.”

In the late 1990s, the National Gallery of Canada discovered that Édouard Vuillard’s The Salon of Madame Aron (1904, reworked in 1934), which it had purchased in 1956, belonged to the Lindon family in France. The gallery contacted the descendant who, surprisingly, insisted that the artwork had never belonged to his family. The NGC maintained that the evidence was incontrovertible and encouraged the Lindon family to make a claim, which it finally did in 2003. The gallery returned the work in 2006.

More recently, the Art Gallery of Hamilton returned Portrait of a Lady (1652), by the Dutch artist Johannes Verspronck, to the family of Alma Solmssen. The AGH had purchased the painting in 1987 from Sotheby’s in New York. In 2003, the Solmssen family’s lawyer informed the gallery that the work had been seized by the Nazis in 1940. At this time, the AGH began researching the claim, but after the family’s lawyer died, the case sat dormant for years. Finally, the family hired a second lawyer, and 12 years after the initial claim, the Art Gallery of Hamilton restored the work to the Solmssens.

The Montreal Museum of Fine Arts (MMFA) has also returned artwork, but there is an outstanding claim from Marei von Saher, the daughter-in-law of Jacques Goudstikker, a Jewish art dealer who died when escaping the Netherlands following the Nazi invasion. His collection, including more than 1,100 catalogued artworks, was looted and sold in fraudulent transactions.

After the war, Allied forces known as the “monuments men” (also the subject of a recent film of the same name), a group of men and women with cultural expertise, recovered some of Goudstikker’s collection. As was customary, they returned the works to the Dutch government, which was then supposed to restore them to Goudstikker’s widow, Desirée. Instead, they were added to the Dutch national collection. Desirée tried to recover the artworks, but the government argued that they had been sold voluntarily. It pressured her to give up her claim, and in 1952 she signed an agreement waiving her
rights to a portion of the collection, attaching a statement expressing her “grave disappointment.” She died in 1996. Finally, in 2006, after an eight-year legal battle, the Dutch government returned 200 artworks to von Saher.

Since then, von Saher has recovered about 50 other objects but has been unsuccessful in her claim for Charles Le Brun’s The Deification of Aeneas (1642-44), which is in the MMFA’s collection. Although the international community agrees the Goudstikker collection was stolen, the museum argues it fairly owns the work it purchased in 1953. Nathalie Bondil, director and chief curator at the MMFA, explains they cannot return the painting because the Dutch government compensated Desirée in the 1950s. However, von Saher’s lawyers maintain the family never received any money.

According to Masurovsky, the international conferences on Holocaust-era provenance have established that any postwar “compensation” should not obstruct restitutions. “It is outrageous that the MMFA should use such stale arguments in defence of their position not to return the painting to the Goudstikker heirs,” he says.

Two years ago, Ihor Holubizky, a curator at the McMaster Museum of Art, was following the news of the Gurlitt stash in Munich when something caught his eye. Otto Dix’s lithograph Leonie (1923) was among the more than 1,400 artworks hidden in the filthy apartment. Since lithography is a printing process, there are several versions of the work on paper — one of them at the McMaster museum.

Holubizky reviewed his file on the print and is confident about its provenance. But the experience made him realize that works on paper, for which there is often less documentation, also require provenance research. Many curators dismiss this as an impossible undertaking since collections usually include hundreds, if not thousands, of works on paper. However, Holubizky has begun the herculean task at McMaster; he considers it part of the museum’s responsibility. “It’s like chasing shadows, but at the same time you have to,” he says. “It’s the right and ethical thing to do.”

Krystina Mierins is an educator and freelance writer in Toronto.