Nazis killed Simon Goodman's grandparents and stole their art; new book tells how he got some of it back 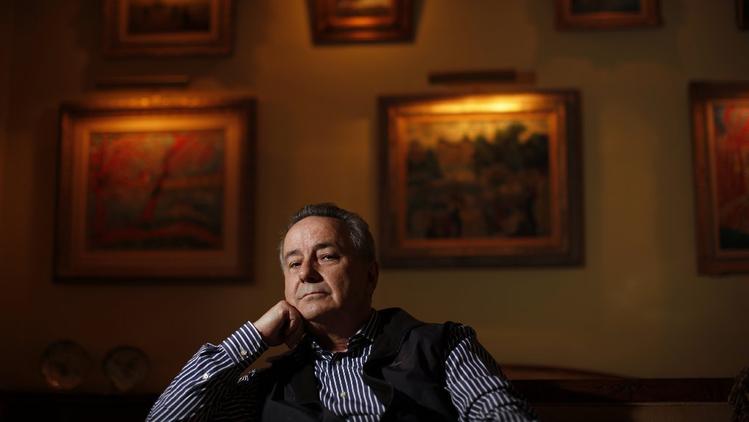 Simon Goodman's book "The Orpheus Clock" tells of his 21-year effort to reclaim artworks the Nazis took from his family during the Holocaust. He's seen here at his home in Beverly Hills.

It’s fitting that Simon Goodman, a Los Angeles man who’s spent the past 21 years tracking down brilliant works of art that the Nazis looted from his doomed grandparents, fixed on a gold timepiece made more than 450 years ago for the title of “The Orpheus Clock," his new book about his quest.

Goodman's narrative traces two chronologies – the family story that his anguished and embittered father hid from him and his older brother, Nick, when they were growing up in London during the 1950s and 1960s, and the story of their increasingly successful and hopeful search for the family’s stolen art that began in 1994.

The quest was launched when a box of documents and correspondence their father had compiled but never told his sons about arrived in L.A. after his death. It contained the record of Bernard Goodman's mainly blunted efforts to retrieve art and other property the Nazis had looted from his parents before sending them to their deaths.

Simon Goodman will give a public talk about "The Orpheus Clock" Wednesday at 7 p.m. at the Los Angeles Museum of the Holocaust; he’ll also speak Oct. 27 at the Magnes Collection of Jewish Art and Life at UC Berkeley.

The author's forebears, the Gutmanns, were a prominent line of bankers in Germany and Holland who converted to Christianity from Judaism in the late 1800s. Religious distinctions didn’t matter to the Nazis, whose theory of a master race defined people strictly by blood.

Goodman writes of a 2007 visit to the National Cemetery at Terezin in Czechoslovakia, where his then 11-year-old son raced down every row of markers, futilely seeking the name Gutmann among the more than 2,000 graves. Goodman’s grandfather, Fritz, had been beaten to death at the Theresienstadt concentration camp in 1944. Louise Gutmann briefly outlived her husband before she was sent from Theresienstadt to Auschwitz and gassed.

The book's tone remains bleak as the author chronicles how his father, a British citizen who’d been in England when World War II broke out, was blocked by postwar European governments as he tried to recoup the family’s lost property, including masterpieces by Degas, Renoir, Botticelli and many others that the Nazis had extorted in forced transactions.

The sons’ early efforts as looted-art sleuths are met by a cold reception not unlike what their father had encountered in 1950s Europe. But as the book proceeds, and time goes by, the art world’s response to claims for restitution thaws considerably.

At first, Goodman writes, “we discovered a glaring disconnect in the art world,” where collectors tried to ward off attempts to dredge up the past and question their ownership rights.

"From art dealers, museum directors, gallery owners, auction houses, and, of course, wealthy collectors came the same indignant questions: Who were these people who suddenly appeared out of nowhere and claimed a valuable painting? Wasn’t it over half a century ago? Aren’t there statutes of limitations? Entirely overlooking the Holocaust and Nazi plunder, their main concern seemed to be that the art market might be 'disrupted.'"

But as the brothers' hard won successes mounted  -- sometimes legal complexities were such that they had to settle for only partial payment -- the art world developed a collective conscience about doing the right thing. Goodman ends with the tale of the titular clock, a treasure from the 1500s that became his first art recovery from Germany itself.

The restitution was made in 2011 without opposition from the government museum in Stuttgart that had harbored the clock for decades and now paid to keep it. With the payment, Goodman writes, came an apology from German officials: “We…regret what happened to your family. We are grateful, however, for the opportunity to set at least this matter straight.”

“Most doors were slammed in my father’s face, while I’ve managed to open quite a few,” Goodman said in a recent interview.

One of the events on his book tour was hosted by Christie’s in New York – a marked change from the reflexive hostility he writes of having encountered from owners, dealers and auctioneers 20 years ago.

“That’s very telling about where we’ve come," said Goodman, who notes in the book that restitution can be very good for the auction business because art recovered by Holocaust vicitims’ heirs often goes on the block, especially when there are multiple heirs who can't otherwise share fairly in a recovered object.

"We’ve had a sea change," Goodman said. “The contrast is vast."