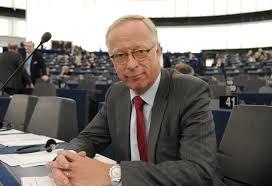 In view of supporting Holocaust survivors, a new coalition, the European Alliance for Holocaust Survivors, was formed in Brussels at the initiative of the World Jewish Restitution Organization (WJRO). Picture: Gunnar Hôkmark, chairman of the new group.

BRUSSELS (EJP)---Thirty-six members of the European Parliament from across the political spectrum have urged the assembly’s President Martin Schulz to increase the body’s attention to the restitution of Holocaust-era property, noting the need for resolution seven decades after the end of WWII.

In a letter supporting Holocaust survivors, the MEPs stressed that European parliamentarians “bear a particular moral responsibility to promote the restitution of property unjustly taken during the Holocaust and its aftermath, as well as to advocate for the social welfare of aging survivors and the enduring remembrance of the Holocaust.”

In view of supporting Holocaust survivors, a new coalition, the European Alliance for Holocaust Survivors, was formed in Brussels at the initiative of the World Jewish Restitution Organization (WJRO), the legal and moral representative of world Jewry in pursuing claims for the recovery of Jewish properties seized during the Holocaust in all countries, except Germany and Austria.

“We appreciate the wide-ranging European support for an increased focus on unresolved Holocaust-era issues,” said Gideon Taylor, World Jewish Restitution Organization chair of operations. “We look forward to seeing an ongoing leadership role and meaningful outcomes by the MEPs comprising the European Alliance for Holocaust Survivors,” he added.

“My colleagues and I are proud to lead this coalition to ensure that the European Parliament focuses on resolving issues impacting Holocaust victims with no further delay,” said Gunnar Hökmark (EPP, Sweden), who chairs the new group.

“We look forward to the European Parliament giving greater attention to this issue.”

The MEPs, coming from 18 EU member states, have also called upon President Schulz to designate a Vice President to address specific concerns that Holocaust survivors face.

“Designating an individual to focus on these issues is an appropriate step for the European Parliament to take,” said Charles Goerens (ALDE, Luxembourg), co-chair of the European Alliance for Holocaust Survivors.

MEPs that have signed the letter to Schulz represent various political groups, including Alliance of Liberals and Democrats for Europe (ALDE), European Conservatives and Reformists Group (ECR), European People’s Party (EPP), Greens, and Progressive Alliance of Socialists and Democrats (S&D).

During the Holocaust, the looting of specifically Jewish property – perhaps the largest theft in human history – was central to Nazi war efforts. Across Europe, a large amount of once Jewish-owned properties confiscated by the Nazis and sometimes nationalized by Communist governments still has not been returned. Nor has compensation been provided to the rightful owners or their heirs.

Moreover, a number of nations that endorsed the 2009 Terezin Declaration on Holocaust Era Assets and Related Issues have not fully addressed the restitution of Jewish communal, private and/or heirless property.

The Terezin Declaration, endorsed by 47 nations, including many EU members, affirms that “the protection of property rights is an essential component of a democratic society and the rule of law” and recognizes “the importance of restituting or compensating Holocaust-related confiscations made during the Holocaust era between 1933-45.”

It also states that “the importance of recovering communal and religious immovable property in reviving and enhancing Jewish life, ensuring its future, assisting the welfare needs of Holocaust (Shoah) survivors, and fostering the preservation of Jewish cultural heritage.”