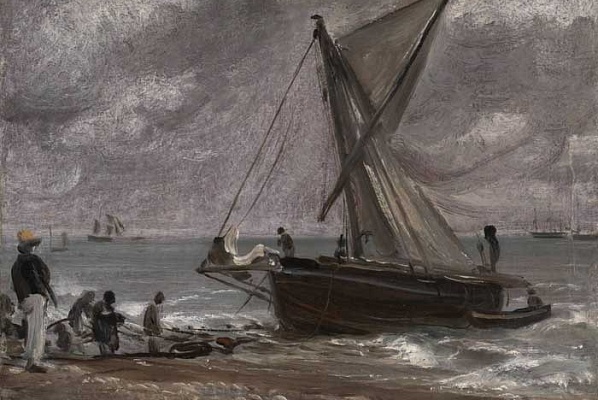 The Tate is expected to hand over a Constable seascape to the heirs of a Hungarian aristocrat, after a new recommendation by the UK’s Spoliation Advisory Panel. Beaching a Boat, Brighton (1824) had been looted after the Nazi invasion of Hungary in 1944. The painting later came to the UK, with its pre-war provenance unknown, and it was donated to Tate in good faith in 1986.

The Constable claim had been considered last year and the spoliation panel then issued their first report, recommending restitution. Tate accepted this. Although the report did not name the pre-war owner, we identified him as Baron Ferenc Hatvany. Tate was on the verge of returning the painting to his heirs when new evidence was provided to the gallery by Budapest’s Museum of Fine Arts, after our article on the case (The Art Newspaper, April 2014).

The Budapest museum had discovered a 1946 Hungarian export licence application for the Constable. Tate then argued that this suggested that the painting could have been returned to Hatvany after the war, before the export application was submitted. If so, his heirs would now have no claim.

The panel’s second report on the Constable, published today, 10 September, names Hatvany, since he has been “publicly identified”. The members of the panel considered the complex question of whether Hatvany had reacquired the painting just before the export licence application was submitted. They concluded: “On the balance of probabilities he [Hatvany] had not recovered it [the Constable] after it was looted and that the export licence was being sought by persons who were either ignorant of its pre-1944 provenance or, knowing it, were sufficiently confident that the work would not in all likelihood be identified as formerly part of the Hatvany collection.”

The panel is therefore now recommending that the Constable “should be returned by the Tate to the claimants”. A gallery spokeswoman says that their recommendation will be “taken to Tate’s board of trustees at their next meeting”, later in September. The painting is off display, in store.