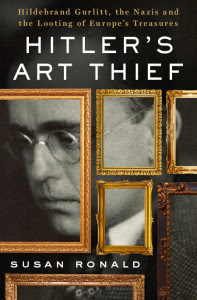 This book may not be for everyone: if all you are interested in is the number of artworks that surfaced out of the anonymity of Cornelius Gurlitt's collections back in 2013, then you might as well skip it and google a few newspaper articles instead. But if you keep wondering not only how he ended up with such a cache (okay, from his father), and, more to the point, how his father, Hildebrand, acquired them and managed to pass them onto his son, beyond the newspaper references to Hildebrand as an art buyer--or, rather, art plunderer--on behalf of Hitler, then this book is required reading.

Anybody who spends time studying the Holocaust is aware of how fraught with contradiction its architects were--just think of how neither Hitler nor any of his inner circle conformed to the "Aryan" physical description that he spent so many years championing; that the tall, muscular blond super-race of Uebermenschen whom he intended to lead forward into a thousand-year-long future would by definition have excluded Goebbels, Goering, Himmler, Bormann and Hitler himself. And consider the millions who cheered these fine fellows on without apparently noticing the contradiction.
Susan Ronald's book explores various elements of this multi-leveled irony, particularly as it pertained to the lust for art and the means of acquiring it. She offers the larger contexts of both the shaping of the Nazi period in and beyond Germany and where the Gurlitt family fit into and outside those contexts. Hildebrand's father, Cornelius, was a fairly prominent art historian (a consummate specialist in Baroque art and architecture) who loved but was disappointed in Hildebrand. For the son opted, in the Age of Hitler, to abandon the Ivory Tower in its theoretical purity for the intrinsic venality of the commercial world of galleries and art dealers.

Given that this was the Age of Hitler, however, Hildebrand should not only have fallen short of the enormous success he came to enjoy. He and his family should probably have ended up on a freight train to the East rather than his taking trains and planes all over the East and West to acquire art. For one of his grandparents was a Jew. making him a 25% mischling--certainly enough to qualify for a one-way ticket to Auschwitz. And he did have quite a bevy of enemies and competitors, some in very high places. But he had just the right friends and patrons in high places to convince the Fuehrer of his absolute value as an instrument to acquire art for the regime. Far from being persecuted, he prospered.

As Hitler's premier art acquirer, he ingathered not only the sort of art that could go into the expansive museum planned for Linz, Austria, Hitler's virtual home town, but art for Goebbels and Goering and the others (including art that Hitler would not have approved, considering it degenerate), and art for lesser Nazis, and art that, albeit unacceptable to Nazi taste, could be traded, bartered, or sold either to acquire proper art or for armaments and other supplies needed for a voracious Reich. Hildebrand Gurlitt seemed to have a unique talent for finding and acquiring the best among the works of art that could serve one or more of these purposes.

One could almost--almost--read this book and forget that the context of the central events is the double matrix of World War II and the Holocaust; that millions of people were being slaughtered across Europe in foxholes and gas chambers during the financial-aesthetic intrigues about which we are reading. Ms. Ronald does not expend undo energy to focus on the horrors going on all around Hildebrand and his little world within a world on fire. But that is part of her point: he operates as if ensconced in an Iron (not Ivory!) Tower that shields him and his family from that fire. And all of those with whom he is engaged are so singularly obsessed with the art that they are pushing across diverse borders while similarly protected, that they neither think about gas chambers nor about the fate of those from whose collections they are swallowing up. The reader is left to ponder the quiet horror of such deafness and blindness.

Often Ms Ronald's references to aspects of the key figures' personalities and activities fall short of drawing a definitive conclusion regarding their lack or absence of a conscience: she provides enough information for the reader to draw his or her own conclusions about these characters without forcing those conclusions upon us. She tells the story adeptly and with careful attention to just the right amount of detail to make her points without burying the reader. But she does not allow us to escape without conclusions nipping at the heels of our minds.

This is necessary to her intentions as a biographer who, in embedding the story of her key character within the larger and particularized history in which his life and death played out, has a still larger goal: to offer this story as a tale that reflects, in the end, on the larger question of human beings and what we are and what we are willing to do--often to each other--to achieve our ends. After all, as we learn, Hitler played off most of the key figures in his inner circle against each other; and nearly all of them, while they were murdering and/or stealing every possible material possession from their victims were also, where they could, defrauding each other--and cheating Hitler whenever it was safe to do so.

What makes this book so important is not only the parts of the story that offer such an incisive psychological portrait of Hildebrand Gurlitt and of all of those around him engaged in the art theft process in which he was engaged. It is an important reminder to those of us involved in the restitution struggle and an eye-opener for those who are not, that the web of deceit, venality, greed, lack of empathy for fellow human beings was far-flung across the human landscape.

Just as the Nazis could not have succeeded in annihilating so many millions of Jews and others without the willing and often enthusiastic cooperation of Frenchmen, Poles, Lithuanians, Ukrainians (to name a few groups)--and not just Germans and Austrians--the movement into the Reich of millions upon millions of works of art and other property from all over Europe would not have been possible without the cooperation of an army of individuals from the art world.

Ms. Ronald pushes us to recognize how banal, indeed, evil can be. How those who presume to be the champions of civilization because they protect its artifacts--art historians, museum curators and directors, gallerists, art dealers and the like--can be and emphatically were the prisoners of their own greed again and again. (So much for the purity of the Ivory Tower). There are no national borders for this ugly side of human nature--not even a vast Atlantic Ocean can separate good from evil. For all of those works slated for trade and barter or exchange for cash rather than for hoarding obviously required and found willing middlemen in "neutral" countries like Spain, Portugal, Sweden and above all, Switzerland, and hungry outlets in the North and South American art markets.

We are still fighting battles for works plundered by Gurlitt and his associates that ended up in the American art world, where no questions of provenance were asked as eager buyers acquired paintings stolen from those slated for annihilation. And the same auction houses in Paris (such as Drouot) that offered their services during and right after the war to help thieves like Gurlitt abscond with property plundered from Jewish victims are still offering their services today to thieves eager to cash in on the sacred cultural and spiritual artifacts of the Hopi and Acoma tribal communities.

The miscues at the end of WWII, from the all-too-brief amount of time available to focus on Gurlitt and his cohorts to the lack of art awareness possessed by those who did interrogate these clean-handed allies of history's most devoted mass-murderers are the subject of Ms Ronald's last chapters. We walk away understanding, if we did not before, how the swiftly-arriving Cold War helped undercut the time and energy needed for more thorough investigations, while gritting our teeth at all of those who walked away, scot-free--and with hundreds of millions of dollars worth of art still within their possession (Gurlitt was one of the most important of these, at least given recent events).

We walk away with many questions. We wonder why it took the Germans so long after the almost accidental discovery of Cornelius Gurlitt's hidden collections to begin to let the world know about them. And why the process of distinguishing what was plundered from what not has been wrapped in veils, and when the process will reasonably be finished. And how it is that a substantial group of Gurlitt's holdings ended up in a late will destined for the Bern Museum. And how the museum can claim to do the necessa1ry provenance research with such a small staff, so quickly.

We walk away wondering, as Ms Ronald does, how much is still hidden in how many vaults in how many places, waiting to be found. With Cornelius Gurlitt's death a little over a year ago, we may never know exactly how much is still gathered here or there from what his father managed to steal for himself while he was stealing for Hitler and others. And what of works plundered and perhaps hidden by the likes of Moeller and Voss? This book is the proof that, just when you thought the last word had been written on the Holocaust, in its profound self-contradictory ineffability, there are more awaiting the pen.