Family to be compensated for Burrell Collection Nazi Loot

Provenance of chandelier hanging in Bute House also being investigated 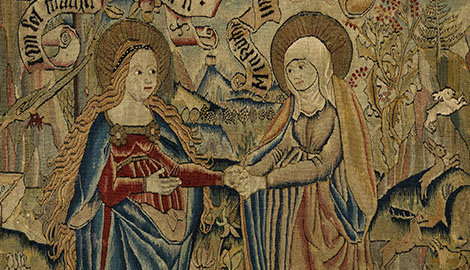 "Tens of thousands pounds" in compensation will be paid for a piece of a Swiss 16th-century tapestry that ended up in The Burrell Collection in Glasgow after being sold by the Nazis, said a spokesman for Glasgow City Council.

He would not reveal the exact amount, which is based on valuations by the auction houses Sotheby’s and Christies and has yet to be agreed with the claimant.

The money will go to the estate of German-born Jewish woman Emma Budge whose heirs launched a spoliation claim for the tapestry in 2004. The claim was approved by Glasgow City Council last week.

After Budge died on 14 February 1927 in Hamburg her family was forced to sell her art collection, which was taken to Berlin in five furniture vans and sold at two auctions.

The claim relating to the tapestry, which depicts the pregnant Virgin Mary and Saint Elizabeth, the mother of Saint John the Baptist, was considered by the Spoliation Advisory Panel.

Set up by the Department for Culture, Media and Sport, the panel’s role is to look at claims from individuals or their heirs, who lost possession of a cultural object during the Nazi era that is now in a UK museum or gallery.

According to a report issued by the panel the tapestry was first sold to a buyer listed as Rosenbaum before it was acquired by John Hunt in 1937, from who William Burrell bought it on 8 August 1938.

“The panel noted that Hunt has been the subject of allegations concerning the acquisition of Holocaust-related cultural objects. The panel, however, is not persuaded that those allegations, even if capable of substantiation, cast any material reflection on the conduct of the city,” the report stated.

The panel’s report recommended that, in exchange for the payment, the claimants should release their claim to ownership of the tapestry fragment, and when the tapestry fragment is exhibited it should be accompanied by a credit acknowledging its provenance and the terms on which the claim was resolved.

Duncan Dornan, the head of museums and collections at Glasgow Life, said: “It is always important to deal with these matters as sensitively and sensibly as possible. From the perspective of a public collection, the citizens of Glasgow would wish it to be dealt with that way.  There is a moral  obligation on us to be responsive and transparent about the process as far as we can be.”

Since the 1990s Glasgow Museum has held a list of objects that have an unclear provenance. “We don’t necessarily think that the implication is that these items have been stolen, but we are unclear of their provenance during that critical period in the 1930s,” he explained.

Investigation into provenance of chandelier at Bute House

The National Trust in Scotland is looking at the provenance of a chandelier currently hanging in the drawing room of Bute House in Edinburgh.

According to an historical account, passed on by the Marquess of Bute’s estate, the item was recovered by interior decorator Felix Harbord in Germany in 1945. It is claimed that Harbord, who was serving in the military at the time, found the chandelier “abandoned in the streets of Cleves”.

Jennifer Melville, the head of collections care, archives and libraries at the National Trust for Scotland, said: “With this particular chandelier, all we have to go on is the written account passed on by the Marquess of Bute’s estate. The scenario painted by the Simon Wiesenthal Center is concerning but we still have no conclusive evidence to confirm that the chandelier was indeed looted.

“Nevertheless, as responsible custodians, we will lodge details of the chandelier on the central spoliation database. This contains a list of artefacts held in the UK of uncertain provenance and enables anyone who may have further information to come forward.“