How my family recovered a painting stolen by the Nazis and sold it for $2.9 million 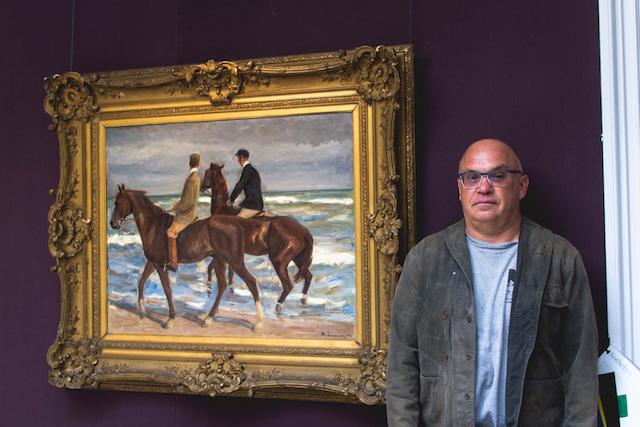 Peter J. Toren grew up in New York City and now lives in Washington, D.C. with his wife and daughter.

On a warm, humid June evening on Regent Street in London, among the fanciest stores in the world, the international art auction house, Sotheby’s, auctioned the Max Liebermann painting Two Riders on a Beach, for many times the pre-sale estimate to an unknown buyer. The painting, a 1901 scene of two elegantly dressed men riding chestnut horses with the surf breaking behind them, belonged to my great great uncle David Friedmann, and was stolen from him by the Nazis.

I saw the painting in person with my son for the first time the day before the auction. German tax investigators found the painting in the Munich home of Cornelius Gurlitt, the son of the infamous art dealer to the Nazis, Hildebrand Gurlitt. Two Riders was part of a 1,200-work trove that was found in Gurlitt’s home in Munich, which included some invaluable pieces that had been stored in tomato crates. While a number of the other works were likely also stolen from Jewish owners, the German government has only returned one painting to its rightful Jewish owner other than Two Riders.

The history of the painting, and especially its recovery, represents a story of success, struggle, survival and redemption that many Jewish families have gone through in the last 100 years.

David Friedmann’s family, a wealthy and successful German-Jewish family, owned a 10,000-acre sugar beet farm, that included a distillery for making schnapps and a “castle,” near Breslau, now Wroclaw in western Poland. Friedmann was an avid collector of art, and in addition to Two Riders, also owned works by Camille Pissarro, Gustave Courbet, Jean Francois Raffaelli, and Henri Rousseau, along with a remarkably comprehensive collection of Italian, German and Dutch fine pottery.

Villa Grisebach, the German auction house, also sold from the Gurlitt trove another Liebermann, The Basket Weavers, looted from Friedmann. My father, who vividly remembers Two Riders hanging in a sunroom in Friedmann’s home in Breslau, recalls him as a kindly, though imposing man, who liked to give parties, attended by German intellectuals including the composer Richard Strauss.

My father and his brother were the only members of his family to survive the Holocaust and as a child of a survivor, I grew up listening to my father tell me stories of my family’s German history and the connection to David Friedmann. My grandfather was a prominent lawyer in Breslau, and as dispensation for serving as a Colonel in the German Army in the First World War, he was able to continue to represent Jewish clients even after other German Jewish lawyers could no longer do legal work. On November 10, 1938, the morning after Kristallnacht, when Jewish stores and businesses were looted, and Jews were beaten and killed, my grandfather was required to assist Friedmann in “selling” some of his property to the Nazi General Ewald von Kleist.

My father and his mother went to Friedmann’s home to bring my grandfather warm clothing because they knew after the completion of the sale that he would be sent to a concentration camp. The Nazis gassed my grandmother and grandfather in Auschwitz in 1943. While my grandfather worked on completing the forced sale of the Friedman property to the Nazi general, my father sat in a room staring at Two Riders. This was the last time he saw the painting. By the time it was finally returned to us last month, 77 years later, he couldn’t see it, having been blind for the past decade.

We never gave up looking for my family’s looted art, but never expected that we would recover any works. We just didn’t have enough information and it was like looking for a needle in a haystack. The break came when we located a December 9, 1939 letter from “Oberregierungsrat” Dr. Westram to the Secretary of Economics in Berlin reporting on Jewish art collections in the city of Breslau. The letter noted that existing laws “did not provide [him] with legal options for direct action,” but directed an “assignment” to secure Jewish art. Westram wrote that he “forbade the Jewish owner [Friedmann] from selling any of the works of art, or dispose it otherwise without obtaining permission from the authorities.” The letter reported that the Friedmann collection besides containing works of art by French impressionists, also included works of art by Jewish painters, including Liebermann’s Two Riders.

Approximately 18 months after seizing the Gurlitt collection, and only after being “outed” by a German investigative magazine, German authorities held a November 2013, press conference in Munich, at which they announced the seizure of 1,200 works of art from Gurlitt’s apartment. The conference prominently featured Two Riders and took place almost 75 years after my father saw it hanging in David Friedmann’s house at 27 Ahornalle Strasse in Breslau. We immediately claimed the work as being looted art and rightfully belonging to the heirs of David Friedmann. Despite the letter and other evidence of ownership, it still took the German government over one year to return the work to my family. Because my father was not the only heir, unfortunately, we had to sell Two Riders.

The auction of Two Riders took place as part of the Impressionist & Modern Art Evening Sale. Other works sold that night included Gustav Klimt’s 1902 Portrait of Gertrud Loew, which sold for over $30 million. The sale total including buyer’s premium of all 51 works was almost $300 million.

Entering Sotheby’s is entering a world where the men are well dressed and the women are mostly young, thin and very pretty. It is also a place where the spoken language is not all English and where many people speak Russian and Chinese. Ultimately, it’s a place where the economic problems of the world don’t get beyond the well-attired greeters at the door.

The auction took place in a large t-shaped conference room with seating for the sellers and for the serious bidders. Curious onlookers are shunted to an overflow room where they can watch the bidding on giant screens. Perhaps, the most interesting feature of the room, however, are two standing rows of individuals flanking the auctioneer who whisper into phones taking orders from the true buyers. The auction began shortly after 7 p.m. and since Two Riders was Lot 27, we had to wait for more than one hour before the auctioneer reached the painting.

The bidding for Two Riders opened at 200,000 GBP, and moved up in 50,000 GBP increments, quickly surpassing the pre-sale estimate of 350,000-500,000 GBP. It was over in a flash, and frankly, I remember very little of the process. It sold in less than two minutes for 1,865,000, GBP or $2,945,395, including buyer’s premium, far surpassing all estimates and just short of an all-time record of $3.4 million for a Liebermann. I was astonished, amazed and extremely pleased that all of the work we had done publicizing the painting’s history had paid off.

Two Riders has meant so much more to me than simply its sale. It allowed me to reclaim part of my family’s history stolen by the Nazis. I learned things that I had never known including more about my father’s courage to succeed in the face of all odds. I now understand to the extent possible, what it meant to be a Jew in Nazi Germany. We have only begun, but will continue to search for other stolen David Friedmann paintings, however long it takes.