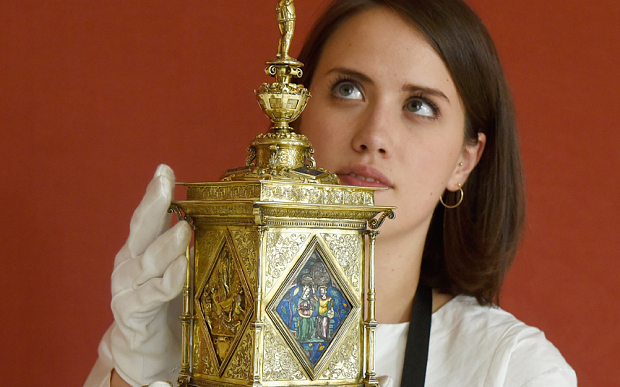 It was one of the greatest bequests the Ashmolean Museum had ever received: an exceptional collection of Renaissance and Baroque treasures from the estate of Michael Wellby, a prominent British collector.

Mr Wellby, who hailed from a family of silver dealers, left almost 500 rare objects to the Oxford institution following his death in 2012.

One of the most spectacular was a salt cellar dating from 1560, which would have graced the table of European kings. But when the Ashmolean began researching its provenance, they uncovered a troubling history. The museum had unwittingly acquired a work looted by the Nazis.

Although there is no evidence to suggest Mr Wellby, who ran a silver shop in Mayfair, acquired the piece in anything other than good faith, it had been parted from its Jewish owners in 1937.

The Ashmolean has now returned the object to the family to whom it once belonged, and it will be auctioned in the Sotheby’s Treasures sale this week with an estimate of £500,000.

The story shines a light on the restitution market and follows last month’s £1.8 million sale of Two Riders on a Beach by Max Liebermann, the first painting recovered from the collection of Cornelius Gurlitt.

When police raided the modest Munich apartment of the elderly Gurlitt, they made one of the art world’s most astonishing discoveries. Hidden behind shelves of tinned food and out-of-date juice cartons were 1,400 artworks worth an estimated £860 million, including paintings by Picasso, Matisse and Chagall. The reason for the subterfuge? Many of the works had been looted by the Nazis and amassed by Gurlitt’s father, an art dealer approved by the Third Reich.

In the same sale, a portrait of 19-year-old Gertrude Loew by Gustav Klimt sold for £24.8 million. Loew, the daughter of Klimt’s physician, left the painting behind when she fled Vienna in 1939, leaving it in the care of her friends, the Felsovanyi family. The family were forced to hand the work over to the Nazis and it was later acquired by the Klimt Foundation. The sale follows a settlement between the foundation and the Felsovanyis.

The dark history of the Ashmolean’s salt cellar begins with Henry and Emma Budge, a German Jewish couple who emigrated to the US in the late 19th century and made their fortune as bankers and financers of railroads from New York to Philadelphia and Boston.

They returned to their native Hamburg, where Henry died in 1927, followed by Emma in 1935. In her will, she bequeathed her collection to relatives and to the care homes for the elderly which the couple had set up. But a Nazi official forced the executors to hand over the entire collection of more than 500 works, which were sold in Berlin in 1937 with proceeds going to the government.

Lucian Simmonds, head of Sotheby’s restitution department, explained: “It was a fire sale. This was really an economic looting rather than troopers coming in with machine guns – it was looting by persecution.”

When the Ashmolean learned of the provenance, the directors immediately decided to give the work back to the Budge family. Emma Budge’s wish will at last be fulfilled: the proceeds of the sale will go to the care homes she and her husband founded for elderly Jews and Christians.

At the time of the bequest from Mr Wellby, the Ashmolean described it as one of the most important to a British museum in more than 100 years.

But Prof Tim Wilson, the museum's keeper of the department of Western art, was aware from the outset that there may be a problem with some of the items as much of the collection was assembled in the 1940s from German sources.

Professor Wilson consulted the government's spoliation advisory panel, which had already been contacted by lawyers for the Budge estate hoping to trace items that had found their way into British collections. The committee ruled that the treasure be returned to the executors.

Sotheby’s set up its restitution department in 1997, with offices in London and New York and has never been busier. The frequency of restituted works coming to the market has doubled in the past 10 years.

“There is a steady stream of issues we deal with,” Mr Simmonds said. “We work on every sale worldwide, screening works of art which Sotheby’s is asked to sell, to minimise the risk of selling something looted.

“When a private collector discovers they have inherited a painting stolen by the Nazis, we help to find a solution. Sometimes the collector is Jewish themselves. [The emotion] is very rarely guilt. There is generally a degree of shock, and then people almost universally say that giving the painting back to its original owner is the right thing to do.

“We are also very privileged to work with heirs to lost collections. For them, it is not just a question of the proceeds. They want to be able to tell the family’s story.”

Sotheby’s Old Master and British Drawings sale on July 8 includes a group of works from the collection of Walter and Vera Eberstadt, a wealthy New York couple who died last year.

Both came from great collecting dynasties and the Adolph Menzel drawings in the sale were inherited from Vera’s family, the von Kuffners, owners of Vienna’s biggest brewery.

The von Kuffners fled from Austria to New York in 1938, spiriting the drawings out of the country. Simmonds said: “The catalogue contains a page telling their story, which the family is very pleased about. A common thread through everything we do is bringing back the memory of these great collectors.”