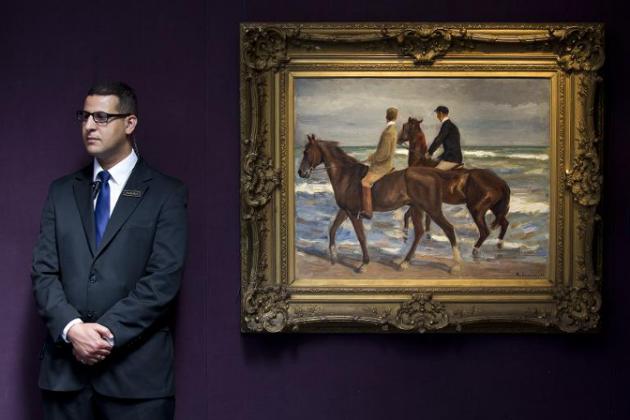 A Nazi-looted painting that was hidden for decades smashed expectations at a rare sale in London on Wednesday as investigators work painstakingly to identify the origins of hundreds of other works from the same haul.

Max Liebermann's "Two Riders on a Beach" was found among more than 1,200 works of art in the Munich apartment of German recluse Cornelius Gurlitt when police raided it in 2012, capturing global attention.

It is the first from the Gurlitt collection to be auctioned off while the origins of many of the works remain unknown.

"The challenge is to go through the provenance of every single picture in this collection," Sotheby's director Bernhard Brandstaetter said.

"It is a lengthy process to establish where a picture comes from, when it was bought and so on," he said, describing the collection as "probably the most significant find in the last 30 years".

Richard Aronowitz, European head of restitution for Sotheby's, described the Liebermann painting as a "scene of great tranquility and joy in nature", adding: "This counterbalances the great sadness and trauma of the work's history."

Wednesday's auction also included a Gustav Klimt portrait lost to Jewish owners during the Nazi regime and had come on sale after the resolution of a dispute between descendants of the artist and the subject.

Helena Newman, Sotheby's co-head of impressionist and modern Art, described it as "one of his finest portraits to appear at auction in over 20 years."

David Toren, one of several heirs of the Liebermann painting, was just 13 when he saw the picture being taken by the Nazis from the estate of his great-uncle David Friedmann in 1938, the day after the Kristallnacht pogrom.

Now, aged 90 and blind, Toren said he is unable to appreciate the painting, returned after a legal battle as the German government still seeks to establish the provenance of other works in the hoard.

Paintings by Picasso, Manet and Chagall were among the huge trove discovered when German police raided Gurlitt's unassuming apartment in Munich.

The Nazis plundered artworks in Germany and across Europe before and during World War II.

Thousands of stolen artworks have since been returned to their owners or their descendants, but many more have never resurfaced.

The Liebermann painting was sold by the Nazis, ending up in the hands of Hildebrand Gurlitt, an art dealer tasked by Hitler to plunder works from museums and Jewish collectors.

The works were inherited by his son Cornelius, who himself died last year.

"Since then it has disappeared from public view," said Brandstaetter. "What's so surprising is that it was hidden away for so long.

"When it arrived here it was very dirty. You could see it had not been cared for. Many of the things Cornelius Gurlitt had in his house were just stuck somewhere, behind cupboards or under beds."

It is one of only two paintings from the Gurlitt stash to be returned to their owners.

The Kunstmuseum Bern is working with German authorities to find other rightful owners -- but faces a laborious task.

Friederike Schwelle, manager of provenance research and restitution at the Art Loss Register, said the Gurlitt find prompted many people to come forward believing they had claims to paintings from the haul.

"Locating heirs can be quite difficult because some perished during the Holocaust and others have since died," she said, adding that is was "very difficult to say" how much art was looted by the Nazis overall.

"People suspect there might still be about 100,000 objects out there that might be involved in Nazi looting that are still missing."