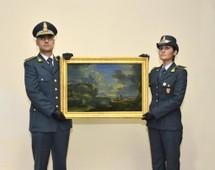 (ANSA) Rome, June 19 - Finance police have recovered in Milan an oil painting by Dutch master Pieter Mulier stolen by Nazi German troops in occupied Poland during the Second World War, police said Friday. The painting by the artist also known as Cavalier Tempesta, was recovered from an auction house in Milan, ending a hunt that began when it was looted from among a treasure trove of artworks that had been placed in underground cellars at the Henrykov abbey for protection from air raids during the war. The painting was part of the collection of the National Museum of Wroclaw in Polish Silesia.