The Man Who Stole Nazi-Era History From the Streets

During World War II, Zosa Szajkowski, a Polish-born historian living in Manhattan, joined the United States Army. He was later sent to Europe, where he learned how many of his Jewish relatives had been killed by the Nazis. He also scoured bombed-out streets for paperwork to send home to Jewish institutions — a kind of revenge for wartime atrocities.

“His interests were wide-ranging, including Nazi government documents but also anti-Semitic books, newspapers and pamphlets, as well as different types of items that survivors had saved from the camps and ghettos,” Lisa Moses Leff, an associate professor of history at American University, writes in her new book, “The Archive Thief: The Man Who Salvaged French Jewish History in the Wake of the Holocaust” (Oxford University Press).

Mr. Szajkowski (pronounced shy-KOV-skee) took home disturbing memorabilia, too, like Hitler’s stationery and antlers from Hermann Göring’s hunting lodge. He sometimes tore apart books to cram them into shipping containers. “I’m doing my barbaric work with a clean conscience,” he wrote to a friend in 1945. 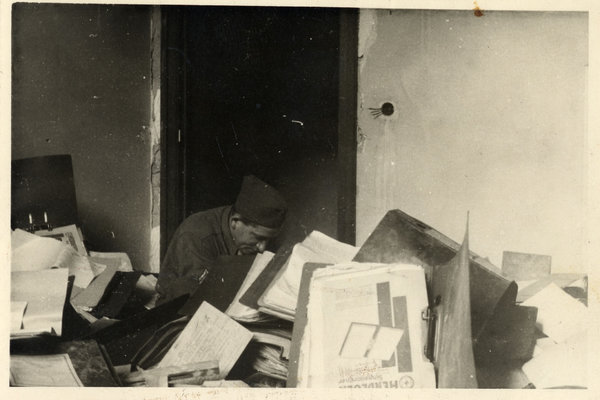 After the war, Mr. Szajkowski, an autodidact and high-school dropout who never secured a high-level academic job, wrote hundreds of scholarly articles, mostly about French Jews, with titles as dry as “Jewish Participation in the Sale of National Property During the French Revolution.” As he pored over museum and library collections in Europe and the United States, he began cutting out pages and selling them. He trimmed markings identifying the original owners. In 1978, after librarians in New York caught him with stolen goods and he was arrested, Mr. Szajkowski committed suicide at a Manhattan hotel.

In researching her book, Dr. Leff has tried to determine what he stole, where it has ended up and what prompted this behavior. Respected in his field, Mr. Szajkowski unearthed references to Jewish life in bureaucratic files where no other Judaica expert had looked. He was wary of scholars, and if he disliked someone who was looking for particular information, Dr. Leff said, “He would send them on crazy wild goose chases.”

He stole mundane lists of transactions and regulations, rather than valuable illuminated manuscripts. His mind-set, Dr. Leff said, “was more like a lawyer looking for evidence than a collector.”

He may have begun stealing to flaunt his expertise. “He wants to show them, ‘I’ve outwitted you all,’ ” Dr. Leff said. His customers at institutions, she writes, were simply trying to reunite “orphaned remnants of a murdered people” and create databases, not support a criminal. A few scholars apparently knew about his thefts, but did not want to report someone they called psychologically unbalanced, according to an unpublished memoir written by a colleague of Mr. Szajkowski’s, Ezekiel Lifshutz.

Part of Mr. Szajkowski’s personal archive belongs to the YIVO Institute for Jewish Research at the Center for Jewish History in New York, including wartime letters expressing his pride in rescuing the texts. Dr. Leff’s efforts to contact Mr. Szajkowski’s family proved fruitless; his widow, Chana Frydman, died in 2012, and she was estranged from their son. Leo Greenbaum, YIVO’s acquisitions archivist, said that while salvaging items in the apartment, “We took all of the family photos.” He added that Mr. Szajkowski was “brilliant.”

Numerous other institutions own material once in possession of Mr. Szajkowski, including the Jewish Theological Seminary in Manhattan. David Kraemer, the seminary’s head librarian, said if legitimate owners of stolen Szajkowski goods did emerge, “I believe that we would do the right thing” and return the artifacts. Before giving anything back, he added, “We would create the finest quality digitization of it,” so the information unearthed by Mr. Szajkowski would remain publicly accessible.