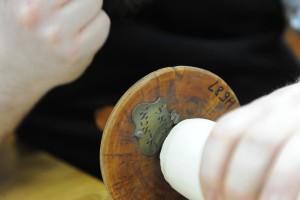 A Torah scroll belonging to the Yechiel Warnau family, stolen by Nazis from Hungary in WWII and stashed ever since in Russia. Photo: Courtesy The Jewish Heritage Foundation Inc.

The Jewish Heritage Foundation announced on Thursday that it was set to publish photographic evidence of a hoard of Torah scrolls and other Judaica stolen from Hungarian Jewish families during World War II and preserved ever since in Russia.

The Florida-based group said it had a list of the owners of the Torahs stolen by the Nazis.

As early as next week, the foundation said it “will publish irrefutable photographic evidence that Judaica stolen from Hungary and other European countries exists and can be identified and returned.”

Founded by Boca Raton resident Sibyl Silver and her late husband Robert, the foundation said it had set up a website to be launched next week that would publish “the first ever obtained photographs confirming the existence of Judaica stolen from Hungarian Jews.”

The purpose of this project by the foundation is to restore and reunite these artifacts of Hungarian Jewry with the proper owners: families and heirs.

The Nazis practiced an official policy of plundering during World War II, including, more famously, artwork, gold, silver, jewelry and other items of value. Estimates in Poland alone put the value of artwork stolen by the Nazis at $20 billion.

But Nazis also plundered Judaica, including Torah scrolls. A report by the World Claims Conference and the World Jewish Restitution Organizations claimed there could be up to 47 countries where such Judaica either stolen during WWII or abandoned after its end is currently stashed.

Russia is listed as a country where a “substantial amount” of this Judaica is located.

The heritage foundation claimed its evidence of the Torah scrolls and Judaica came from the Lenin Regional Scientific Library in Nizhny Novgorod, a Russian city about 250 miles east of Moscow.

A full list of the owners of these Torah scrolls and photographic evidence will be published by the group on June 11, and the foundation will hold a ceremony in 2016 to reunite the scrolls with their owners. The group called its discovery “miraculous and spiritual.”

The Nazis exterminated about half of Hungary’s Jewish population during their occupation of the country.