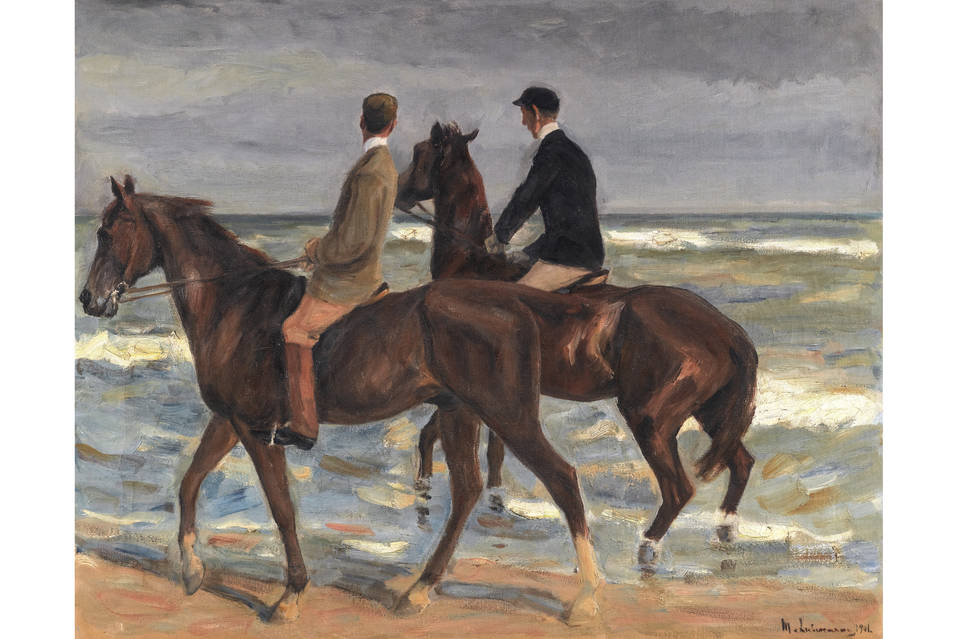 Three years after German authorities uncovered a vast collection of one of Adolf Hitler’s main art dealers, the first artwork restituted from the trove will head to auction next month.

The work isn’t expected to break Liebermann’s $3.4 million auction record, but it could beat expectations if collectors are intrigued by its war-torn history and subsequent role in the saga of Cornelius Gurlitt.

German tax investigators found the painting three years ago hanging in the Munich home of Mr. Gurlitt, the son of a dealer who helped amass art for a museum that Hitler unsuccessfully planned to build in Austria.

Mr. Gurlitt was never charged with a tax crime, but the discovery of his 1,200-work trove sparked an international furor and stoked a broader debate about restitution of Nazi art loot. Mr. Gurlitt maintained his innocence, but before his death last year, he bequeathed his trove to the Kunstmuseum in Bern, Switzerland, with the caveat that any works with proven ties to Jewish owners be restituted to their heirs.

Only a pair of paintings including the Liebermann, which belongs to David Toren, a 90-year-old retired patent lawyer in New York, and several relatives, have been returned. Mr. Toren’s great-uncle David Friedmann originally owned “Two Riders” before the Nazis looted it in the run-up to World War II.

Liebermann, who lived from 1847 to 1935, was a major German painter of impressionism who gained a reputation in the early 1900s for painting German’s wealthy elite. A friend of French artists like Edouard Manet, The artist is known for painting beach scenes like “Two Riders” along with views of his garden and several dozen self-portraits, according to Sotheby’s expert Helena Newman.

Because the artist was Jewish, he endured Nazi persecution in his later years; his wife, Martha, committed suicide in 1943 after she learned she was set to be deported to Theresienstadt concentration camp.

The story of the Jewish family that owned, lost and recovered Liebermann’s “Two Riders” is just as poignant. Mr. Toren said his great-uncle David Friedmann made a fortune producing bricks and managing vast sugar beet farms near Breslau, now Wroclaw in western Poland. Mr. Toren said his great-uncle was a tall, imposing man who powdered the top of his bald head and hosted rollicking parties at his villas in the area. Composer Richard Strauss was known to visit.

Mr. Toren said his great-uncle was also a well-known art collector who owned works by Camille Pissarro, Gustave Courbet and Jean-François Raffaëlli. But it was the Liebermann that Mr. Toren remembers best, with good reason.

On the morning of Nov. 10, 1938, Breslau was reeling from Kristallnacht, the wave of anti-Jewish pogroms that began sweeping through Germany the day before. Mr. Toren, who was 13 years old at the time, was also worried by the arrest that morning of his father Georg, a prominent lawyer who also oversaw his great-uncle’s legal affairs. His father was supposed to help his great-uncle sign over a family hunting lodge to a Nazi general that day, so Mr. Toren said his mother called the Nazi general, Ewald von Kleist, for help to secure his father’s release, temporarily.

“My mother and I rushed to the villa with warm underwear and socks because we knew my father would be sent to the camps after the business dealings were over,” Mr. Toren said. “While my father handled the deal, I sat in a side room in a chair opposite the Liebermann. It was a dark room, but there was a strong light hitting the painting.”

Mr. Toren said he “always liked the painting with the horses” because he had learned to ride horses on his great-uncle’s estate a few years before. Two hours later, his father and the Nazi general re-emerged, deal done, and everything about Mr. Toren’s life began to spiral.

His home was soon after pillaged by Nazis, who took everything of value including his pet parakeet, Habakkuk. The following year, his family secured a spot for him on a kindertransport to Sweden, where he lived out the war not knowing what happened to his relatives. After the war, he learned that his great-uncle had died of natural causes in 1942 and all his possessions dispersed among Nazi overseers. His parents had been killed in the gas chambers of the at Auschwitz concentration camp. Mr. Toren’s older brother survived, having been sent to the U.K. for safety. Mr. Toren eventually moved to New York, where he lives today.

“Two Riders” also moved around, valued by Nazi appraisers in 1939 at a below-market value of around 100 Reichsmarks and auctioned off three years later for a more respectable 1,600 Reichsmarks to the executive director of the Kunstmuseum Breslau, Cornelius Müller Hofstede. Months later, for whatever reason, Mr. Hofstede resold the Liebermann to an art dealer, Hildebrandt Gurlitt, who eventually passed it onto his son.

Mr. Toren said he never gave up looking for his family’s art collection, and he said he is pleased to be reunited with “Two Riders,” albeit briefly. Because he is one of several heirs, Mr. Toren said the family decided to offer it up for sale so they can divvy the proceeds.

He hopes to use his share to buy a house in Snowmass, Colo., where he can spend more time with his grandchildren. “I have to keep living,” he said.