A Swiss Merchant of Death’s Nazi Friends and Suspicious Masterpieces 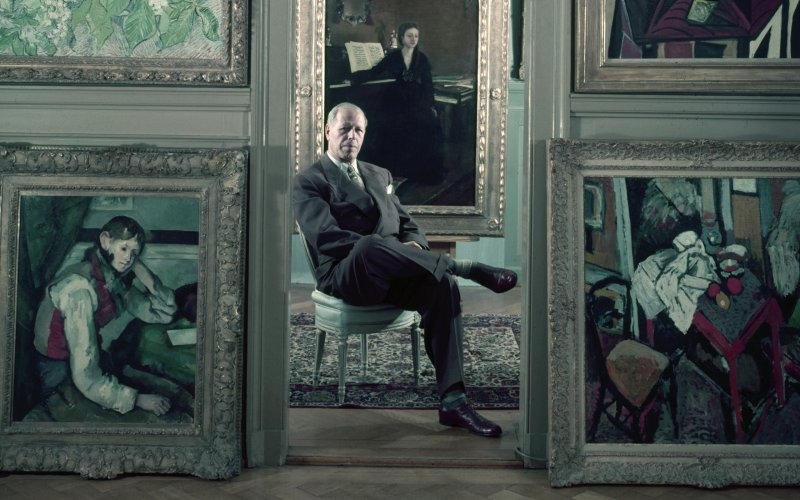 A famous manufacturer of anti-aircraft guns collected hundreds of paintings in Nazi-occupied Paris with some help from Hermann Göring. Now what happens to them?

He sold weapons to Roosevelt, Churchill and Hitler and was once the richest man in Switzerland.  Between 1940 and 1944, thanks to the popularity of his Oerlikon 20mm antiaircraft gun, Emil Georg Bührle’s personal fortune soared from 140,000 to 127,000,000 Swiss Francs (roughly $6 billion in today’s U.S. dollars), giving him plenty of cash to go on art-buying sprees in Nazi-occupied Paris.  The paintings he bought there would form the basis of what eventually became the permanent collection of one of Europe’s most distinguished art museums, the Foundation E. G. Bührle in Zurich.

Now, after the near-collapse of Bührle’s business empire and a spectacular 2008 heist of four Impressionist masterpieces from his museum — followed by their dramatic recovery — the artworks of his Foundation are slated to be folded into Zurich’s municipal art museum.

But these represent probably no more than a third of the 600 pieces of art that Bührle collected before his death in 1956, and there is great speculation about the rest of his collection:  how many of those works will see the light of day?  And how many of them were purchased from the Nazis?

When Emil Bührle went shopping for art bargains in the 1940s, he already showed a marked favoritism for Impressionist and Post-Impressionist paintings, generally preferring large masterpieces in oil by artists such as Renoir, Cézanne, Dégas, Manet, Picasso and Gauguin.

But he was less discerning about the dealers from whom he bought them:  he dealt with known traffickers in looted Jewish art, and, according to documents in the U.S. National Archive, he seems to have enjoyed preferential treatment from Hermann Göring when buying art from Nazi agents, such as the use of diplomatic pouches to transfer the paintings to Switzerland from Occupied France.   He also freely patronized the Fischer Gallery in Lucerne, a known purveyor of stolen Impressionist and Post-Impressionist art, which the Nazis considered “degenerate.”

In 1948, an independent tribunal determined that 77 artworks then in Switzerland had been stolen in wartime France; Bührle owned 13 of these.  Lawsuits for restitution were filed and, after losing the first one to Paul Rosenberg, he attempted to buy back the remaining paintings at market value.  He was successful with nine of them, returning the other four to their original owners.

Soon afterwards, the Swiss Federal Court declared that Bührle had been unaware of the stolen paintings’ tricky provenance, and had originally bought them “in good faith,” despite his well known association with Göring.  This court decision was thought to indemnify Bührle against future claims and it may also have lent him an air of legitimacy:  pretty soon his company was again supplying both the United States and its NATO allies with arms.

Emil Bührle was riding high from 1951 to 1956, when he acquired some 450 precious artworks — about three-quarters of his eventual collection.  In 1954, he was the subject of a feature article in LIFE Magazine, for which famed photographer Dmitri Kessel captured two signature portraits of him: one in front of his new weapons system, and the other, surrounded by his art collection.  Two years after the article appeared, while he was still at the top of his game, Bührle dropped dead of a massive heart attack at the age of 65.

Dieter Bührle took over the reins of Oerlikon-Bührle, but he seems not to have inherited his father’s luck or business acumen.  With no world wars to profit from, Dieter made money by flouting Swiss law and worldwide sanctions, exporting weapons to war zones as well as arming South Africa’s apartheid regime.  This earned him the Grand Cross of the Order of the Star of South Africa for “excellent meritorious services,” from P. W. Botha — but landed him in hot water in Switzerland, where he was put on trial for illegal arms sales and sentenced to eight months in prison.  (The sentence was suspended, probably thanks to friends in high places.)  Eventually, Dieter’s sister, Hortense, engineered his ouster from the family firm, and sold it to a group of investors.

Despite the flagging fortunes of the armaments company, however, much of Emil Bührle’s art remained safe over the years.  In 1960, his widow and children opened the Foundation E. G. Bührle museum in a beautiful villa next to their home on Zurich’s Zollikerstrasse, endowing it with some 200 paintings, which represented 60 percent of the remaining collection, according to an email we received from Lukas Gloor, the head of the Foundation.

According to Gloor, Emil Bührle’s collection stood at around 500 paintings at the time of his death, and about 50 were sold or otherwise distributed between 1956 and 1960.  His two children inherited around 100 paintings each, some of which they have sold over the years.  One famous example is van Gogh’s Wheat Field with Cypresses, which the Metropolitan Museum bought from Dieter Bührle in 1993 for $57 million.

But then one day, disaster struck:  on a Sunday in 2008, three masked gunmen with Slavic accents stormed into the Zollikerstrasse museum, forced everyone onto the floor, and made off with four famous masterpieces —  a van Gogh, a Cézanne, a Monet, and a Dégas — together valued at about $163 million.  Two of the paintings were found a week later in a parked car; the other two were tracked down to Serbia four years later, with the Cézanne the object of a spectacular (some say staged) raid by Serbian special forces on the infamous Pink Panthers crime ring.

The robbery sealed the fate of the museum.  “The immediate consequence for our collection’s museum was the fact that we had pretty much to close it down,” Lukas Gloor said. “We were no longer a publicly accessible museum.”  Plans were made to add a new wing to Zurich’s municipal art museum — the Kunsthaus — to house the entire collection of the Foundation E. G. Bührle, apart from about ten paintings that are no longer considered authentic.  There is no word about whether any of the family’s other artworks will be included.  Environmental groups have protested the building of a new wing of the Kunsthaus, delaying the expansion, but it has now been announced that construction will begin in September 2015, with completion scheduled for 2020.

In the meantime, it is still possible to see the Foundation’s Bührle collection at its home on Zollikerstrasse the first Sunday of every month, provided that, well in advance of your visit, you agree to submit a scan of your passport and provide satisfactory answers to questions as to your interest in the Foundation.

But a cloud of suspicion still hangs over Emil Bührle’s collection, and questions about him and the provenance of his paintings won’t go away.  Recently, claims have been made in connection with Monet’s Poppy Field near Vétheuil, one of the paintings stolen (and immediately recovered) in the 2008 heist, and Manet’s La Sultane.  Potential heirs of these paintings insist that their relatives sold them under duress, and at bargain prices, when their lives were in peril.  Indeed, Max Silberberg, who owned La Sultane, later died in Auschwitz.

Thomas Buomberger, a historian who has written an upcoming book on Bührle, echoes these concerns, telling us that “in the provenances of a considerable number of paintings in the Bührle collection there are holes that have yet to be explained.”  He is of the opinion that no paintings should be incorporated into the Kunsthaus unless all questions as to where they came from have been answered, especially because the museum is subsidized by the public.  “The public should have the right to know whether works of art with a doubtful provenance are in the depots of the Kunsthaus and if so what is it going to do about it,” he says.

Lukas Gloor, however, confidently dismisses all doubts about provenance.  “We are today in the very fortunate position that the collector very actively addressed these issues,” he told Reuters in 2010, and he stands by that statement today.

Still, as we’ve just celebrated the 70th anniversary of the defeat of the Nazis, it’s worth bearing in mind that while most plundered works of art have been recovered, about 100,000 are still missing, many of these thought to be held by museums in the U.S. and Europe that were perhaps less than fastidious when it came to tracking down their previous owners.