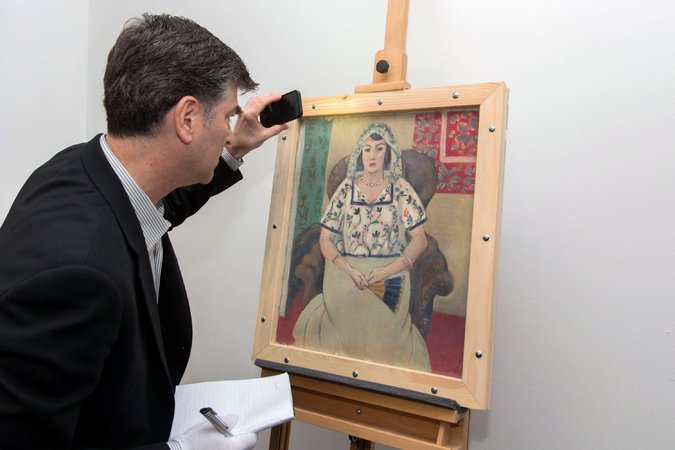 Christopher A. Marinello, a lawyer who specializes in tracking down looted and stolen art, with the recovered Matisse, "Femme Assise," in Munich on Friday.

MUNICH — The slide made public in November 2013 showing a painting of a woman wearing a white blouse embroidered with blue, purple and red flowers, a fan on her lap, was grainy but its subject was immediately recognizable to Elaine Rosenberg. It showed a priceless Matisse. Her family’s Matisse.

Christopher A. Marinello, a lawyer who specializes in tracking down looted and stolen art, was in a New York hotel room at the time, when his phone rang. It was Ms. Rosenberg, his client and a descendant of Paul Rosenberg, one of the world’s leading dealers in Modern art, whose collection, including the Matisse, “Femme Assise,” or “Seated Woman/Woman Sitting in an Armchair,” was looted by the Nazis.

On Friday, more than 70 years after its disappearance and after a year and a half of hard-nosed negotiations, the painting was returned to the Rosenbergs. Part of the art trove hoarded by Cornelius Gurlitt and discovered in his Munich apartment in 2012, it was one of the first two paintings from the collection to make it back to the families from whose homes and collections the works were seized.

Another painting found in Mr. Gurlitt’s home, “Two Riders on the Beach,” by Max Liebermann, was also handed over this week. Representatives of the descendants of David Friedmann, a Jewish industrialist from Breslau, whose art collection was looted by the Nazis, took possession of the picture on Wednesday, said August J. Matteis Jr., a lawyer who represents David Toren, a great-nephew.

The restitutions this week are the culmination of a story that upended the art world and laid bare the cumbersome bureaucracy in Germany that still hampers the return of looted works, despite pledges by the government to right the wrongs of previous generations. The Germans have vowed to provide proactive clarification and a fair and just solution, in keeping with Washington Principles on Nazi-Confiscated Art.

Yet for Mr. Marinello, getting to this day involved combing through the roughly 250,000 documents, letters and photographs in the Rosenberg family’s records; chasing down signatures of the rightful heirs and Mr. Gurlitt’s descendants; and pressing the authorities, past one failed agreement and through numerous phone calls and letters. Evidence to prove their ownership included a photo from 1938 showing the painting on display in Mr. Rosenberg’s Parisian gallery, and a receipt showing that he had bought it from Georges Bernheim on March 28, 1938.

“There is a great deal to be learned from this case,” the Rosenberg family said in a statement, “which should serve as a signal to the global art market that there is much more to do to ensure the integrity of collections, to uphold the aims of the Washington Principles and to resolve historic claims in an expeditious and professional manner.” The family thanked German officials for their cooperation and encouraged others to pursue the return of looted works.

There are many more. More than 1,200 pieces were found in Mr. Gurlitt’s apartment, and other works, including a Carl Spitzweg painting and a Pissarro called “View of Paris” and dated 1902, have been recognized as looted art. A task force established by the German government and the state of Bavaria continues to investigate the ownership history of about 590 works, while Mr. Gurlitt’s decision to leave his estate to the Kunstmuseum Bern in Switzerland faces legal challenges.

“It is hoped that the Culture Ministry will act with expediency and transparency in reviewing and resolving other claims to the Gurlitt pictures,” the family said.

Monika Grütters, who was appointed Germany’s minister of culture shortly after it became known that German authorities had discovered the works in Mr. Gurlitt’s apartment, doubled the country’s budget for provenance research to 4 million euros, or $4.6 million, and established the German Center for Cultural Property Losses. The center serves as a clearing house for all provenance research in the country, and as a central point for people seeking information about a missing painting or the history of a work in a private collection.

“Gurlitt was a wake-up call,” she told The New York Times in an interview in July.

Germany has invested €13 million in provenance research and restituted 12,000 objects over the past decade, many of them books. But families and even small museums have been stymied by the fact there is no centralized place to handle queries regarding looted works. Even when they find a person or authority in charge, many do not understand how to navigate the complexities of dealing with looted art.

Prosecutors in Augsburg, Germany, who initially confiscated the works from Mr. Gurlitt’s home in February 2012 as part of a tax investigation, kept the discovery a secret. Only a year later, after a wave of international criticism over its handling of the art, did the Culture Ministry intervene.

Mr. Marinello, who runs Art Recovery International, based in London, sent documents proving the Rosenberg claim to the judge in Augsburg who had jurisdiction over the case at the time. They included inventory cards listing the Matisse painting as item 1721, and a 1946 declaration from Paul Rosenberg to the French government that included the work among those that were still missing.

Several weeks later, he composed a letter he had translated into formal German and sent directly to Mr. Gurlitt. That led to negotiations that nearly resulted in the painting’s return. But hours before he was to board a flight from London in March 2014, his phone rang — Mr. Gurlitt had fired his lawyer and the restitution was off.

Two months later, Mr. Gurlitt, 81, died in his home, leaving his collection to the Kunstmuseum Bern. Although agreements reached with the German and Bavarian governments before his death stipulated that any works that were found to have been looted were to be returned to their rightful owners, the Rosenbergs and other families now faced negotiations not only with the German task force, but also the Munich probate court handling the estate.

Mr. Marinello took possession of the work on behalf of the Rosenberg family at an art storage depot outside Munich early Friday. He declined to say what the family intended to do with the painting, aside from having it cleaned to remove the layers of grime and to restore the original brilliance of its colors.

The first step, however, would be to get it out of the country. “It is definitely leaving Germany,” he said.


An earlier version of this article misstated the amount Germany has earmarked for provenance research. Is is 4 million euros, not €4 billion.