April
The Guardian 14 May 2015
By Louise Osborne in Berlin

Seated Woman, painted in 1921, was taken from Paul Rosenberg as he fled Germany, but was discovered in Cornelius Gurlitt’s Munich flat 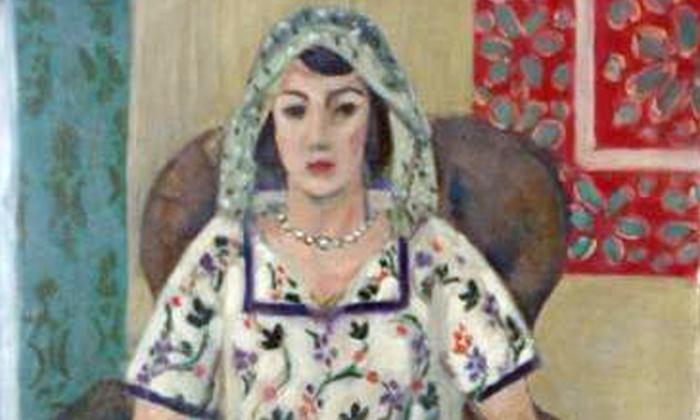 Detail from photograph of the painting Seated Woman, which an expert said had barely been touched since Matisse painted it.

The descendants of a Jewish art dealer who had works from his collection looted by the Nazis are to be reunited with a Matisse painting after a decades-long search.

The 1921 painting Seated Woman, also known as Woman with a Fan, originally belonged to Paul Rosenberg, but was looted as he fled from Germany to France in the 40s. It was discovered in 2012 among a trove of stashed artworks in the Munich flat of reclusive collector Cornelius Gurlitt.

A German court this week approved the painting for release to the heirs of its original owner, alongside Max Liebermann’s Two Riders on a Beach from 1901, which will be returned to the descendants of art dealer David Friedman. They are the first works from the Gurlitt collection to be returned to families of the original owners.

Christopher A Marinello, chief executive of the London-based Art Recovery Group, which is representing Rosenberg’s descendants, said the painting holds more than material value for the family. “The value is that it is a recaptured piece of their past life that was taken away from them through the Nazi looting,” he said.

“It’s been a rollercoaster of a case,” said Marinello, in Munich to pick up the Matisse for the family, who filed a formal claim to be reunited with the painting over a year ago.

The painting is one of around 400 masterworks that were looted from Rosenberg’s collection, which also included works by Pablo Picasso, Georges Braque and Claude Monet.

The paintings left to Bern Museum by Cornelius Gurlitt, son of a Nazi-era collector, may have strictly speaking been legally acquired but many were seized from Jewish owners

Rosenberg later attempted to recover the artworks, a task that his son, daughter-in-law and granddaughters are continuing 75 years on, said Marinello.

“There are about 60 pieces still remaining,” he said, adding that it was not always easy for families to recover such pieces. “The Rosenberg family is fortunate that he was able to flee Paris before the Nazis marched in and was able to get out much of the gallery documentation … For people fleeing for their lives, if they even got out at all, the last thing on their minds was to collect receipts.”

The collection of Gurlitt, who died last year at the age of 81, also included paintings and drawings by Marc Chagall, Claude Monet and Max Beckmann. Gurlitt’s father, Hildebrand, an art dealer, amassed some of the works during the Nazi era, when he was allowed to buy and sell art classified as “degenerate” by the Nazis.

The artworks were discovered in Gurlitt’s flat in 2012 during a tax evasion investigation and confiscated by the Bavarian authorities to be investigated.

Gurlitt bequeathed his collection to the Kunstmuseum Bern in Switzerland, where those paintings found not to have been looted, are due to be displayed. However, some of his relatives have since filed an inheritance claim with the Munich court to dispute his decision, claiming doubts over the state of his mind at the time he bequeathed the collection. It is not yet clear how the case will be dealt with.

Although Marinello said the Rosenberg family were grateful to the German authorities, the Bern museum and the Gurlitt heirs for their help in returning the work, he said the returning of artworks to descendants could be handled better.

“I would say the process has taken quite some time and I think there’s a lot of room for improvement on how cases are dealt with,” he said.

“There were deficiencies in transparency and not enough funds were allocated to the task force to research. There will be more cases like this.”

The art recovery expert would not say what the Rosenberg heirs planned to do with the Matisse painting, saying that it was “their right to do whatever they wish to do”. The artwork was in “excellent condition”, he said, having been barely touched since Matisse painted it.