A Small Victory in Pursuit of Looted Art

Fritz Grunbaum, an ancestor of Timothy Reif ’80 *85, was a renowned cabaret performer, songwriter, and director in pre-World War II Vienna. Grunbaum, the first cousin of Reif’s paternal grandfather, moved in artistic circles, ultimately collecting dozens of works by leading artists, including the late Austrian painter Egon Schiele. Almost eight decades later, the fate of those artworks — and who should own them — is in dispute.

When the Nazis invaded Austria in 1938, Reif says, Grunbaum — who was known for criticizing the Third Reich — tried to flee, but he was quickly recognized. He was arrested and sent to Buchenwald and then to the Dachau concentration camp, where he died in 1941. Grunbaum’s wife died the following year, also in a concentration camp, and the collection vanished.

Some works surfaced in the mid-1950s, when they were sold by a dealer in Switzerland, purportedly after a niece of Grunbaum’s smuggled them out. Reif and other family members, however, have fiercely disputed this version of events in court.

Reif, who is now general counsel in the Office of the U.S. Trade Representative, became involved beginning in the 1990s, when his mother and aunt contested the ownership of Dead City III, a Schiele painting that was being shown temporarily in New York City. Manhattan District Attorney Robert Morgenthau seized it, kicking off a legal tug-of-war that eventually would span the Atlantic. It since has been sent back to Austria.

The family has contested the provenance of other works as well. But a lack of international legal standards and incomplete or contradictory document trails and witness memories have made the task difficult. 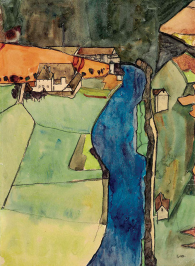 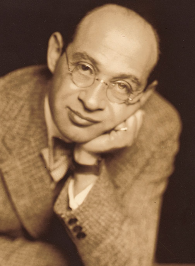 No artwork has yet been returned to Reif’s family; most works believed to have belonged to Grunbaum either have vanished or are scattered around the world. Still, the Reif family recently won a modest victory. Last fall, a Schiele watercolor, Town on the Blue River, was sold by Christie’s under an acknowledgment that Grunbaum was a previous owner, and a share of the proceeds was reserved for his heirs.

“It was very, very important to me and the other heirs, even though it’s only one piece of the collection,” Reif says.

Family members want to see the proceeds of future sales go toward a foundation that encourages young artists and freedom of expression — two things Grunbaum cherished, Reif says: “I believe someday we will be able to achieve that, and have some restoration of this man’s dignity and a reminder of the extraordinary courage he possessed.”