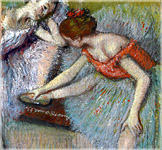 MANHATTAN (CN) - On the cusp of the 70th anniversary of the Allies' victory, family of a German-Jewish couple who once owned an Edgar Degas painting filed a federal complaint against Christie's, accusing the auction house of misleading the public about the provenance of their Nazi-looted inheritance.

The May 5 lawsuit against Christie's marks the second time that Kurt Beck and 10 other relatives of Margaret and Ludwig Kainer have gone to court objecting to a $10.7 million auction of a Degas masterwork.
Titled "Danseuses," the Impressionist canvas is one of Degas' many pastel renderings of dancers preparing for a performance.

Before being forced to flee the Third Reich, Ludwig Kainer had been a set designer for Serge Diaghilev's "Ballets Russes," The New York Times reported.

One year before Adolf Hitler's rise to power, the Kainers left Germany for travel, never to return. Their attempt to rebuild their lives in France did not stop the Nazis from confiscating their collection of more than 400 artworks three years later, the relatives say.

Berlin-based auction house Leo Spik sold the Nazi-looted works, including the Degas, in its special auctions of the assets of persecuted Jews known as "Judenversteigerung," the complaint states.

Although both of the Kainers survived the period of the Holocaust, Margaret died childless and without a will in 1968.

When Christie's sold the Degas six years ago, the auction house announced: "This work is offered pursuant to a restitution settlement agreement with the heirs of Ludwig and Margret Kainer in 2009," according to the complaint.

The relatives call this an example of Christie's "deceiving and misleading the buying public" about its right to sell the work.

"In fact, plaintiffs, the legitimate heirs of Margaret Kainer, never entered into any such agreement," the complaint states.

Christie's had not contacted the "heirs" at all, instead speaking only with a foundation set up by the Swiss bank UBS purporting to represent them, the relatives say.

Kainer's relatives allegedly learned about their inheritance years after the sale, and they sued UBS two years ago in New York County Court. That case is still pending, and an amended version of the complaint names Christie's as a defendant.

The latest lawsuit hits Christie's separately with a new claim that could triple its liability.

Christie's noted that the action comes in reaction to its motion to dismiss in the related case and "because the courts have not yet resolved who is the rightful heir."

"Christie's is a recognized leader in the global restitution community and acts in good faith and with the highest level of integrity in all restitution settlements in which it is involved," it said in a statement. "We find these claims to be without merit and look forward to defending ourselves in court."

The relatives meanwhile emphasize that their story is not unique.

"Beginning in the 1990s, as the volume of the theft by the Nazis from Jewish collectors became known and publicized, the victims of the Nazi thefts and their heirs sought to recover the artworks that had been stolen from them," the complaint states.

"Christie's made the representation with knowledge that it was untrue or with reckless disregard as to its truth," the complaint states.

The same day that Kainer's relatives sued Christie's, New York's top financial watchdog Benjamin Lawsky held a ceremony announcing the return of a 17th century, late Italian Renaissance portrait to its rightful heir. The "Portrait of a Man" canvas had previously hung at the Louvre, and the restitution ceremony took place at the Museum of Jewish Heritage.

Friday will mark the 70th anniversary of Victory in Europe Day, when the Allied Forces brought so-called "Thousand Year Reich" to an end.