US Returns Five Paintings Looted by GIs During WWII to Germany 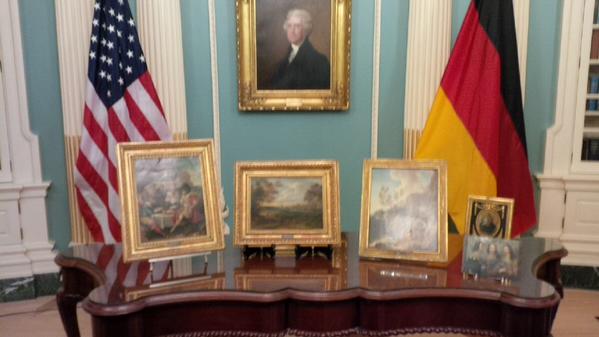 German Ambassador Peter Witting twitted an image of the five works from the ceremony at the US State Department
Photo via: twitter.com/AmbWittig/

Five old master paintings missing since WWII have been handed over to the German government, Deutsche Welle reports.

The paintings—which were brought to the US by American GIs during WWII—were restituted with the help of the State Department and the Monuments Men Foundation.

"You can be assured these paintings come home to a worthy setting," German Ambassador Peter Witting said in a ceremony at the US State Department on Tuesday. Witting thanked the families who returned the art works, and Robert Edsel of the Monuments Men Foundation.

“I just couldn't keep them," James Hetherington, the stepson of the poker winning GI, is quoted saying in the New York Times. “Whether he won them in a poker game or not, they were stolen property."

"Seventy years have passed," Edsel commented, and stressed that the foundation isn't interested in the ways in which the paintings got to the US. "We are focused on returning them to their rightful owners."

The poker winnings include works by Flemish Baroque painter Frans Francken III, the German painter Christian Wilhelm Ernst Dietrich, and Austrian artist Franz de Paula Ferg. They had been deposited in a potassium mine during the war for protection.

The other two paintings originated from the Empress Friedrich of Kronberg Castle, near Frankfurt.

The Monuments Men Foundation has been instrumental in the return of Nazi-looted works to their rightful owners (see Dutch Royals to Restitute a Nazi-Looted 17th Century Painting), but from the thousands of artworks missing from German museums since WWII, very few have made it back.

“The soldiers who stole them, they just wanted a souvenir," said Norbert Michels, director of the Anhaltische Gemäldegalerie museum in Dessau. "These were cruel times and there were many injustices. We Germans cannot complain about some paintings. That would not be right," he added.