We reported recently on the possible change in the anticipated restitution of a John Constable painting in the Tate Gallery, London.  After the United Kingdom Spoliation Advisory Panel recommended that Beaching a Boat, Brighton be returned to the heirs of Baron Ferenc Hatvany, the Tate issued a statement that it had received new information and was reviewing the recommendation.

The Daily Mail reported yesterday what that new information might be: a 1946 export permit from Budapest to Zürich: 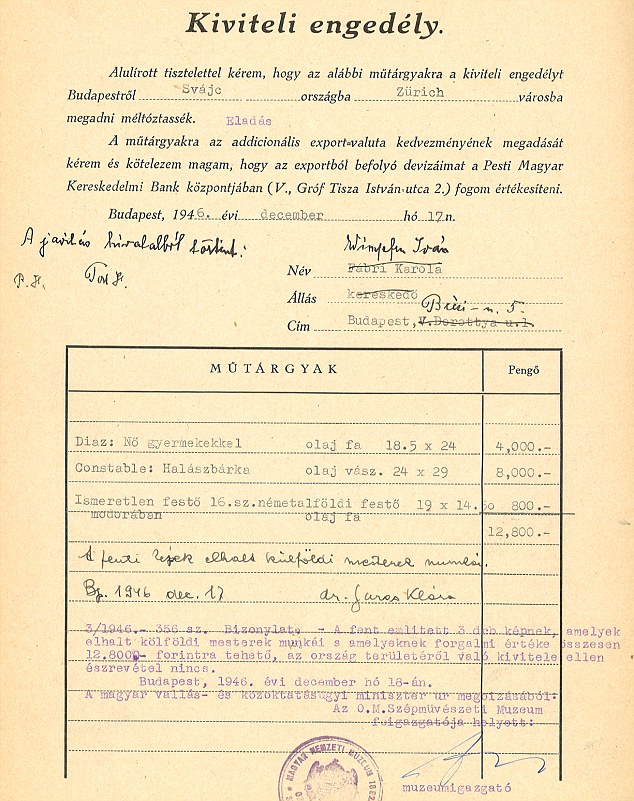 If the painting was looted, however, then the most important additional data would not be when it left Hungary, but who exported it and with what understanding about its provenance.  That is to say, if it were exported in 1946 by a subsequent possessor who knew it was stolen, then under both Continental and common law, the Hatvany family would prevail (as the true owner under UK law, and because the subsequent purchaser was not a good faith holder).  If the exporter were unaware of the circumstances, then the choice of law would be outcome-determinative.  A good faith purchaser could convey clear title under Continental law, and the owners subsequent to that (even if they themselves learned it had once been stolen) would be the legal owners.  But if UK law controlled the Tate’s claim to ownership, then even if the export permit proved the claimants’ timeline wrong, it should not matter and the family would still be the legal owners, today.  Of course, if it had been returned to Hatvany and he had sold it in 1946 voluntarily, then the subsequent owners could likely prevail.  But just because the time of export differed from the family’s understanding hardly means that Hatvany got the painting back.  The permit sheds little decisive light on this; it is signed by a dealer named Karola Fabri (one behalf of whom, it does not say), and identifies a painting called “Fishing Boat,” which could be, but is not necessarily, the one in the Tate.

None of these addresses the ethical dimensions either, which are hardly insubstantial.  Indeed, in its recommendation, the Advisory Panel scolded the Tate about its provenance research.  One can expect sharp objections if the museum elects to keep the painting by relying on a document if the museum did not have that document when it acquired the painting.

There is also some irony in that the document was apparently retrieved from the Budapest Museum of Fine Arts.  That museum, and a handful of others, is itself embroiled in a restitution litigation in Washington, DC  over the Baron von Herzog collection that was targeted by the Nazis after they assumed control of Hungary in 1944.

Interestingly, the Daily Mail quoted an unnamed source at the museum as citing a duty to protect any assets owned by the British public, saying “No one disputes that the picture was at one stage looted by the Nazis, what is in dispute is what happened after it was returned to its owner.”  That may be, but it seems well in doubt that the painting is owned by the British public, or that it ought to.  The permit certainly justifies taking into consideration, but without more it does not seem to warrant actually rejecting the recommendation for restitution.