The Difficult Work of Reclaiming Art

Wesley Fisher does not have the Hollywood credentials of the stars of recent films like George Clooney in The Monuments Men or Ryan Reynolds in Woman in Gold, but he has done much of the nuts-and-bolts work over the last two decades related to the kind of Nazi-era art restitution that these movies featured. 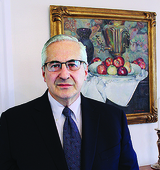