Beyond the Woman In Gold: On the hunt for the Nazis’ looted art 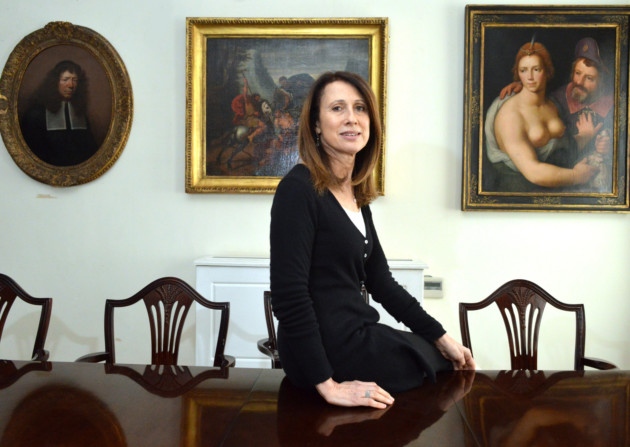 Anne Webber tells Joanna Deakin how her work at the Commission for Looted Art mirrors the plot of Helen Mirren’s film.

To a casual observer, it was merely an old, scuffed leather volume. But to one woman it was priceless.

Its discovery was a deeply emotional moment as she realised the handwriting on the book’s fly-leaf must be her mother’s. It was a small but precious symbol of so much else she’d lost and her only tangible link with her past.As a small child she had been smuggled out of Nazi Germany with her parents like so many other Jewish families. Tragically, she was the family’s only survivor. The rest were captured in Belgium and murdered by Hitler’s troops.She was hidden by a Catholic family for the duration of the War and then started a new life in Palestine.

The reunion with her mother’s book was part of a remarkable restitution programme headed by Belsize Park resident Anne Webber, co-chair of the Commission for Looted Art. But for countless other Nazi victims, the painstaking search for their family possessions continues.

Their story starts soon after the Nazis came to power in 1933 when paintings and artefacts were seized in every occupied European country. Hitler, famously a would-be art student and Hermann Goering, who fancied himself as an art connoisseur, behaved like kids in a sweet shop.

Known as the Rape of Europe, a staggering five million artworks were stolen. Anything considered sufficiently Aryan, such as Rembrandts, were earmarked for the Furhermuseum that Hitler planned for his home town of Linz in Austria. But anything seen as “degenerate”, such as work by Egon Schiele or Van Gogh, were sold at so-called “Jew auctions” to raise cash for the Nazi war machine. Other paintings were simply burned.

After the end of the war, it was impossible to return the art to their rightful owners because they were either dead or unable to provide proof of ownership.

Webber has become something of a heroine to these families, having spent years helping reunite them with their lost treasures.

The former documentary filmmaker came across a reference to families still searching for looted art in 1996 and made a Channel 4 film, ‘Making a Killing’ about a Degas landscape belonging to a man who was beaten to death for his art collection in a concentration camp.

Webber managed to broker a deal between the man’s daughter and the new owner, an American pharmaceutical billionaire who’d bought the painting in good faith.

It was held up as a prime example of successful resolution at the Washington conference in 1998 where 44 countries agreed to assist in cases relating to Nazi art theft. Six weeks later, the Commission for Looted Art in Europe was founded with Webber at the helm.

“Everybody always thinks it’s just rich people’s paintings the Nazis took, but they took everything – your tablecloths, your towels, your pots and pans,” says Webber.

“As part of Hitler’s aim to eradicate the Jewish people, he wanted to erase people’s identity.

“Retrieving the works so as to benefit financially is not the main reason behind the pursuit of family heirlooms. The artworks’ recovery is all about re-instating the record and reclaiming history and meaning.”

She adds: “What spurs me on to pursue often frustrating cases, although many are very upsetting, is that they concern the loss of home, loss of lives and loss of meaning.”

After the war, Allied troops found stacks of pillaged treasures - hidden in places as varied as salt mines and castles. The policy of the victorious governments was to return items to the governments of the countries where the artworks were found. But others had disappeared. Bundles of looted canvases were appropriated by the triumphant Red Army and sent via train to Russia. According to the distinguished British foreign correspondent Charles Wheeler, some were mistreated and one was even exchanged for a handful of potatoes which the soldiers turned into vodka.

And so, families often grieving and broken by the conflict – set about trying to win back their art. Often, their approaches to officialdom were brusquely rebuffed and, demoralised, they didn’t pursue their claims.

The tale of the struggle to get back five paintings is the plot of the new film Woman In Gold, starring Helen Mirren.

She plays Maria Altmann, whose uncle, in Vienna in 1938, was forced to give the Nazis his collection of paintings, jewellery and porcelain - as well as his sugar manufacturing business.

Maria fled the city with only the clothes she stood up in. Decades later, at the age of 82 – and against all the odds - she set out to reclaim five works by Gustav Klimt. One was a portrait of her aunt, Adele Bloch-Bauer, dressed in gold. In the intervening years it had become a national treasure - Austria’s Mona Lisa - and was worth over £90 million. As Maria discovered, reasserting ownership from the Austrian government was a crushing process.

Also seized in Vienna by the Gestapo was Portrait Of A Gentleman by the Spanish genius El Greco. It had been owned by the industrialist Julius Priester and subsequently passed illegally through the hands of several dealers. Now, after nine years of sleuthing, Webber has restored the masterpiece to Priester’s heirs. Weber says the family were thrilled. “It was very moving to see it for the first time - still in the same frame as when it hung in Julius’s apartment.

“The story of the seizure and trade of this painting over a period of more than 60 years shows how much the art trade has been involved in the disposal of Nazi-looted art and how difficult it is for those who have been dispossessed to find and recover their property.

“The dealers often blatantly refuse to co-operate - it being a totally unregulated market. Many dealers are well aware which works of art are tainted.”

Another family whose art was stolen by the Nazis were the Rothschilds. After surviving the war, the famous bankers didn’t want to return to their homes, which had been commandeered by the Gestapo and left with bloodstained walls. However, they did want the Austrian government to return their art collection. According to Webber, the Austrian government agreed but callously forced the Rothschilds to “donate” a third to the Austrian nation.

It wasn’t until 1998 that the descendants of these grand Viennese families were able to use new restitution laws to get much more of what was their right. A new central registry of missing art is a vital help in navigating what one lawyer says is the “most unregulated business in the world”.

Webber estimates that since 1998 at least 45,000 items have been returned from Austrian state institutions, although sadly, despite exhaustive efforts, 90 percent of the artworks remain illegally in private collections or with unco-operative dealers.

As for Altmann, intriguingly, she blamed the Nazi looting operation on Hitler’s own frustration as a failed artist and says that history might have been very different if the Fuhrer had not been twice rejected by the Viennese Academy of Art as a student.