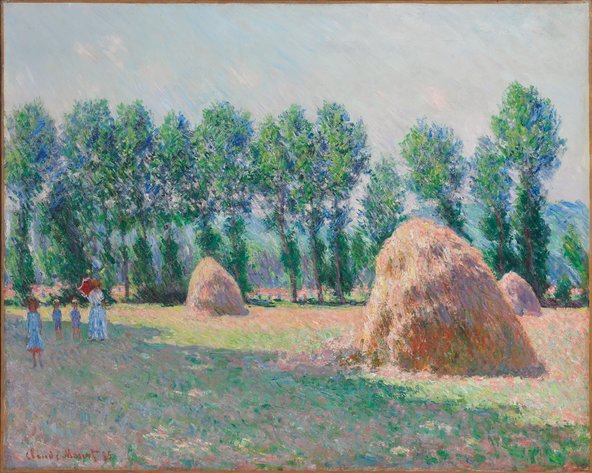 Much of the art collection of René Gimpel, a French art dealer who associated with the intellectual elite of his day, was lost during World War II when the dealer was detained by the Vichy government and shipped off by the Nazis to a German concentration camp.

But the Gimpel family expects to benefit from the sale of one of the lost works on May 14 when Christie’s in New York will auction “Haystacks at Giverny,” by Claude Monet. Under the terms of a restitution agreement with the painting’s consignor, the heirs of Mr. Gimpel will receive an undisclosed amount as compensation as part of the sale.

The painting, from 1885, is one of three works by Monet that Christie’s is selling that week, and depicts a pasture near Monet’s home in northern France. The scene’s most prominent features are a line of poplars, with haystacks in the foreground. Monet, who Mr. Gimpel would visit, according to Gimpel’s diary entries, later returned to the haystack motif for a famous series of paintings from 1890 and 1891.

The auction house estimates the painting, an oil on canvas, could bring in between $12 million and $18 million.

Auction houses have been struggling with how to manage the sale of artwork transferred with sketchy provenance during the chaos of the war. But in some instances, they have been able to help arrange restitution settlements that allow the works to be sold by their current owners but also enable the heirs of Jewish victims to reap some benefit.

The dealer’s grandson, who is also named René Gimpel and works as an art dealer, with galleries in London and Paris, said he believes his grandfather was forced to sell the Monet under duress.

Mr. Gimpel, 67, said the painting is listed in his grandfather’s stock records as of 1931. During the war, when his grandfather was sent to Neuengamme concentration camp, where he died, the painting surfaced at a gallery in Geneva. By around 1967 it had entered a private collection in Switzerland, which is now arranging its sale through Christie’s.

“It is a measure of the sympathetic understanding from both the painting’s consignor and from Christie’s that my family sees closure on this matter,” said Mr. Gimpel, whose father was also interred in concentration camps, but survived.

“The search for items which disappeared during World War II requires a great deal of patience, sometimes luck and above all, hard work,” he said. “It’s a gossamer thread and we remain sanguine.”

Mr. Gimpel said his family had reached restitution agreements on two other artworks that had belonged to his grandfather, including a Gainsborough portrait, “Portrait of Mrs Elizabeth Edgar,” that was sold at Sotheby’s in London in December for about $31,400 including buyer’s premium.