The Story Behind ‘Woman in Gold’: Nazi Art Thieves and One Painting’s Return 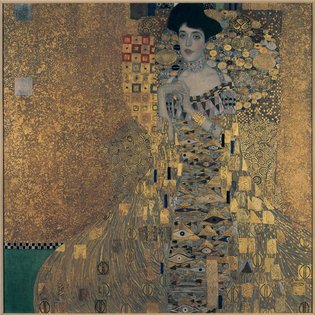 There are many reasons that among the hundreds of thousands of cases involving artwork looted by the Nazis the story of Gustav Klimt’s “Adele Bloch-Bauer I” would particularly appeal to filmmakers. For one, there is the mesmerizing gold-flecked painting itself, which set a record auction price of $135 million when it was sold in 2006. Then there is the David-and-Goliath tale featuring a feisty octogenarian heroine — Ms. Bloch-Bauer’s niece Maria Altmann — taking on a recalcitrant Austrian government. And finally there is the satisfying conclusion. Ms. Altmann gets the portrait back. Justice prevails.

Yet even today, viewers may not realize how rare such justice is when it comes to the return of art looted during the Nazis’ reign of terror to its rightful owners or — as is now more likely, seven decades later — to their descendants.

As the new film “Woman in Gold,” starring Helen Mirren as the indefatigable Maria Altmann, acknowledges in a brief written prologue before the credits roll, more than 100,000 stolen works of art are still unaccounted for.

When Ms. Altmann first sought to reclaim some of her family’s paintings in 1998, there were reasons to think that the odds of restitution — crushingly low for so long — might have finally improved. After decades of neglect or outright opposition to restitution efforts, international public opinion had finally begun to turn in the wake of post-Cold War revelations about continuing malfeasance involving Nazi plunder. Official reports commissioned by both Switzerland and the United States detailed, for example, how the Swiss had reneged on agreements to return hundreds of millions of dollars’ worth of gold stolen by Nazi Germany, while Swiss banks had agreed to a $1.25 billion settlement with Holocaust survivors after being sued for their refusal to return assets deposited for safekeeping during the war. Meanwhile, a new generation, less interested in covering up historical sins, exposed the ways governments, museum officials, dealers and buyers often systematically frustrated attempts to return stolen assets and art to the original owners.

In 1998, 44 countries, including Austria, signed the Washington Principles on Nazi-Confiscated Art, a nonbinding agreement that called for a “just and fair solution” for Jews and other victims of Nazi persecution.

That same year, the Austrian Parliament passed a law requiring museums to open up their archives for research and to return plundered property. The legislation was spurred in part by revelations about looted art published by the journalist Hubertus Czernin, portrayed in the film by Daniel Brühl. He discovered, in the formerly sealed archives of the Austrian Gallery, evidence that the country’s claim to the Bloch-Bauer Klimts was faulty.

Several paintings, including the 1907 portrait of Adele, had been hanging in museums after their confiscation by Nazi agents. Austria had long claimed that Ms. Bloch-Bauer, who died in 1925 from meningitis, left the portrait to the country in her will. But records showed that the artwork clearly belonged to her husband, the wealthy Jewish industrialist Ferdinand Bloch-Bauer, who fled his homeland in 1938. And he had left his entire estate to his heirs — one of whom was his niece Ms. Altmann — when he died in 1945.

Still, the newly created Austrian restitution panel denied Ms. Altmann’s claim. It wasn’t until 2006, after the United States Supreme Court cleared the way for Ms. Altmann, then living in California, to sue the Austrian government, that an agreement was reached. Rather than pursue a lengthy and costly trial, Ms. Altmann agreed to binding arbitration and was awarded five of six paintings that had been seized from her family.

(The painting, now in the collection of the Neue Galerie in New York, is part of a new exhibition created in conjunction with the movie. Opening on Wednesday, it explores the relationship between Klimt and his patron, Ms. Bloch-Bauer.)

On the world stage, there were follow-up conferences to the Washington Principles and another agreement in 2009, but still no enforcement mechanisms. Stuart E. Eizenstat, a former special State Department envoy, who negotiated the 1998 agreement, has repeatedly complained that the hoped-for widespread restitution never occurred, because of a combination of flagging governmental pressure and a variety of legal constraints. Nations have also devoted few resources to do the painstaking provenance research that can establish ownership claims.

As recent headlines show, occasionally there is progress. Earlier this month, an El Greco seized by the Gestapo in 1938 from a Viennese industrialist was returned to his family by a dealer. And the Kunstmuseum Bern in Switzerland, which has inherited the trove of Nazi-era art found in the Munich apartment of Cornelius Gurlitt, whose father was the Nazi-era art dealer, continues to pledge to return looted works to the families of the original owners.

But restitution tends to be the exception rather than the rule. A report issued this past September by the Conference on Jewish Material Claims Against Germany and the World Jewish Restitution Organization concluded that most countries have done little to live up to international agreements. Italy came in for particular censure, followed by Hungary, Poland, Argentina, Spain and Russia. (The report, while noting that Germany had made some progress, still chastised the government for keeping its discovery of the Gurlitt stash secret.)

The German newspaper Der Spiegel also took successive regimes to task in 2013 when reporters revealed that the German government, both on its own and with various museums, ignored or actively frustrated restitution for decades. At the time, the paper called it “a moral disaster that began in the 1950s and continues to the present day.”

In France, fewer than 100 of the 2,000 unclaimed works of looted art that hang in the country’s museums have been returned. In 2013, the French culture minister defended the record, saying it was “not because of a lack of will on the part of museums,” but because of scattered records and the deaths of so many who were involved.

While some of Europe’s special restitution committees have facilitated the return of stolen art, other decisions have been questioned. In 2013, a Dutch panel, for example, ruled that despite evidence that a Jewish industrialist persecuted by the Nazis was forced to sell two old masters paintings under duress, the heirs’ interest in restitution “carries less weight” than the interests of the museums that currently own them.

Most recovery attempts result in failure. In general, the few successful claimants tend to have big bankrolls, meticulous records and an exceptional run of luck.

What aided in the return of Adele Bloch-Bauer’s portrait was its location in a federal museum, said E. Randol Schoenberg, Ms. Altmann’s lawyer. In most instances, he said, the missing works are in private hands, and the owners either don’t know where they are or have no way of compelling their return.

That is the case with a valuable trove of art, including three multimillion-dollar Canalettos, owned by Bernhard Altmann, Ms. Altmann’s brother-in-law, and forcibly auctioned off after the Nazis invaded Austria in 1938. “The fact is that artworks in private collections outside of the United States are almost impossible to recover,” Mr. Schoenberg (played by Ryan Reynolds in the film) said.

Even in the United States, several legal experts and Jewish groups complain that some American museums have failed to live up to promises to settle claims based on the merits, a charge vigorously denied by art institutions.

The Norton Simon Mmuseum in Pasadena, for example, has spent years fighting Marei von Saher, the heir of a noted Dutch Jewish art dealer who fled after the Nazis invaded the Netherlands. She is trying to reclaim two prized paintings of Adam and Eve by Lucas Cranach the Elder. Jonathan Petropoulos, the former research director for art and cultural property for the Presidential Advisory Commission on Holocaust Assets, who provided expert testimony in Ms. Altmann’s case, has labeled the response of American museums “lamentable.”

Still, publicizing the successes, however rare, is important, Mr. Schoenberg emphasized. “Each time there’s a success, it gives people more hope, and that allows the restitution efforts to continue.”