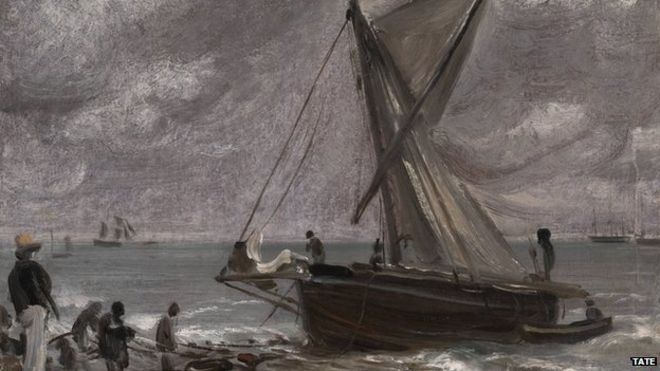 The Constable artwork became part of the Tate's collection in 1986

Tate Gallery says "new information" has emerged over a John Constable painting in its collection thought to have been stolen by the Nazis.

It has asked for a review of a recommendation that it should return the work to the heirs of the original owner.

A committee of government-appointed experts said last year that the gallery had "a moral obligation" to return it.

The oil painting became part of the Tate's collection in 1986.

The 1824 work - entitled Beaching A Boat, Brighton - was understood to have been looted and smuggled out of war-time Hungary.

It was first recorded in London in 1962, and was donated to the Tate by Mrs PM Rainsford.

However, "new information has come to light on the history of the painting," said a Tate statement.

"This was reviewed by Tate. The Tate Trustees have now approached the Secretary of State to invite the Spoliation Advisory Panel to review the new information. We cannot comment further at this stage."

The panel resolves claims from people, or their heirs, who lost property during the Nazi era, which is now held in UK national collections.

The DCMS said it was "considering the information received from the Tate trustees and a decision will be made in due course".

After the Spoliation Advisory Panel's initial conclusion a year ago, Tate said it would recommend to its trustees that the work be returned to returned to the family of the original owner, who died in 1958.

The report said the unnamed man was "a well-known Hungarian artist and connoisseur from a Jewish background" and described how he fled the 1944 Nazi invasion and "went into hiding".

The claimants discovered two years ago that the painting by Constable had ended up in Tate's collection. The claim was formally submitted to the spoliation panel in April 2013.