April
Daily Mail 25 March 2015
By Flora Drury
A multi-million pound masterpiece by 16th century artist El Greco has been reunited with its rightful owners more than seven decades after it was stolen by the Nazis. 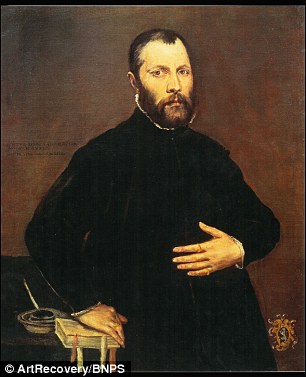 Missing: The painting was stolen by the Gestapo from Julius Priester's Vienna home in 1944

El Greco's 'A Portrait of a Gentleman' had been missing ever since the Gestapo raided the collection of Jewish banker Julius Priester in 1944.

Mr Priester, a prominent art collector, had fled to Paris with his wife Camilla six years before, when Austria was annexed into Germany as part of the Anschluss in 1938.

When the war ended in 1945, Mr Priester set about trying to recover his collection - a hunt his heirs took up on his death in 1954.

That determination to trace it has been rewarded after a 70 year search, when it was discovered on sale through a London art dealer last year.

Although the value of the painting's value is unknown, the world record price for an El Greco is £9.2million.

But it seems the emotional reward may have been even greater.

When they were finally reunited with the oil painting, Mr Priester's heirs were thrilled to see it was still in the same frame it had when it was hanging above the dresser in the couple's Vienna dining room.

Anne Webber, co-chair of the Commission for Looted Art in Europe, which helped reunite the Priesters with the painting, revealed they were 'absolutely delighted' to get it back.

'It was very moving when they saw it for the first time - it was still in the same frame it was in when it hung in Mr Priester's apartment,' she said.

'It has taken more than 70 years to reunite the painting with its rightful owners and we are delighted for the family.'

Mr Priester's art collection, comprising of pieces by celebrated artists including Peter Paul Rubens and Anthony Van Dyck, was just one of many plundered from wealthy Jews on direct orders from Hitler.

When the Nazis were defeated in 1945, Mr Priester set about trying to track down the whereabouts of his stolen art.

He spent the best part of a decade searching for the art, working with the Austrian authorities to spread the word around the world. 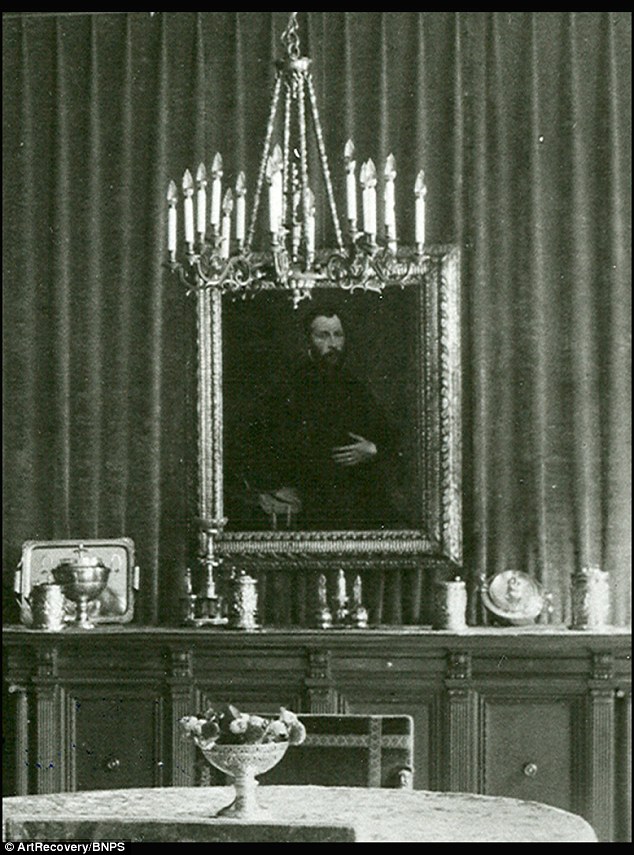 Reunited: The painting, which hung in the dining room, pictured, is still in its original frame

In 1953, the Austrian Federal Police wrote to Mr Priester to say his missing El Greco painting had been sold by the Gestapo to New York art brokers Knoedler, arriving in the city in 1952.

However the dealer Frederick Mont refused to comply, denying all knowledge of the painting and thereby halting the investigation.

But Ms Webber revealed: 'It turns out Knoedler had the painting for more than 30 years and showed it worldwide with a false provenance.

'It spent 13 years in London before going to a Swiss private collector in 2003.'

When Mr Priester died in 1954 aged 84, his family picked up the search and continued investigations into the missing artwork.

In 2005 the Commission for Looted Art in Europe, a non-profit organisation which helps track down stolen art, were called into help with the search.

A breakthrough came last year when the commission discovered the El Greco listed for sale in a gallery in New York via a London art dealer - and a claim was immediately put in for it.

'The dealer acted admirably as soon as he realised the painting's true history and we were able to negotiate a deal to return the painting to Mr Priester's heirs, who now live in Britain,' said Ms Webber.

">Christopher A. Marinello, CEO of Art Recovery International, which represented the art dealer the painting was acquired from, added: 'This case proves that equitable restitution of looted works is attainable.

'Without the strength and precision of the historic claim on one side and the compliance and co-operation of the gallery on the other, this would never have been possible.'

Julius Priester was a banker and president of Austrian petrol firm Petroleumgesellschaft Galizin.

He began collecting art in the 1920s, building up a notable gallery.

The Commission for Looted Art in Europe, a non-profit organisation, has helped return more than 3,500 pieces of stolen artwork to their rightful owners since it launched in 1999.


WHO WAS EL GRECO?

Domenikos Theotokopoulos, better known as 'El Greco', was born in 1541 in Crete, into a wealthy family.

About four years later, he moved to Venice where he developed his intense, colourful mannerist style.

He remained in the city until about 1570, before moving to Rome - the heart of the art world at the time.

Here he studied the works of Michealangelo and Raphael, and continued to develop his own style.

But it was during his time in Toledo, in Spain, where he moved in 1577, when he would produce his best works - even being commissioned by King Philip II.

El Greco died in April 1614, but his genius was not recognised until the 20th century, when his work began to be noticed by the art world.

Nowadays, an El Greco painting can sell for millions