Heirs donate trove of works after long effort of recovery 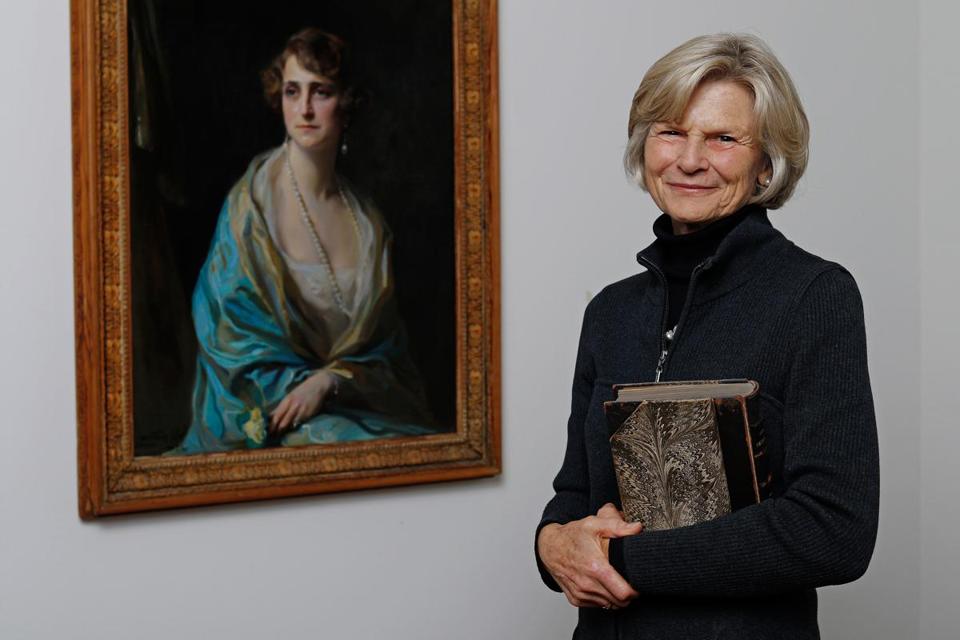 MFA trustee Bettina Burr stands next to a painting of her grandmother, Baroness Clarice de Rothschild, by the artist Philip de László. The piece is part of a collection being donated to the MFA Sean Proctor/Globe Staff

“Geronimo!” That’s the message Matthew Looram cabled his mother-in-law, as the train carrying hundreds of the Rothschild family’s artworks barreled through the Austrian Alps and into Switzerland.

It was 1949, and for much of the previous decade, Hitler’s army had kept the family’s treasure hostage, stashing roughly 3,500 of its art objects in salt mines, with some of the booty destined for the dictator’s proposed mega-museum, the Führermuseum.

But the family’s triumph was incomplete. While many pieces were indeed on the train, some of the family’s Nazi-looted works were never recovered — and others were out of reach, as the Austrian government had demanded that the Rothschilds “donate” 250 of their finest possessions to the Austrian state.

Now, nearly 70 years later, some of those lost possessions have a new home — at the Museum of Fine Arts.

They are among 186 objects from the original collection of Baron and Baroness Alphonse and Clarice de Rothschild that heirs of their daughter, Bettina Looram, are donating to the museum. Shepherded by Looram’s daughter, Bettina Burr, the gift includes everything from jewel-encrusted gold boxes and 18th-century French furnishings to portraits by the painters George Romney and Philip de László.

The MFA will present nearly 80 of these objects in the exhibit “Restoring a Legacy: Rothschild Family Treasures,” running March 1 through June 21.

“I always felt in the back of mind that the thing I would love the most would be if these pieces came here,” said Burr, who began volunteering at the MFA in 1996 and is now vice president of the board of trustees. “I think my mother felt that it would be a homecoming for these pieces.”


The emerald and diamond brooch that Bettina Burr’s grandfather gave her grandmother on their 25th wedding anniversary.

The gift, valued in the millions, is rich in European decorative arts, prints, drawings, and rare books, embodying what was known as le goût Rothschild (the Rothschild taste) and featuring several pieces of personal jewelry, including a sumptuous emerald and diamond Art Deco brooch that Burr’s grandfather gave her grandmother on their 25th wedding anniversary.

“It’s a complete transformation” of some of the MFA’s collections, said MFA director Malcolm Rogers, adding that the gift gives the Rothschilds a dramatic new presence in the museum. What makes the gift unique, however, is its back story: “This gift allows us to tell, in a very moving way, one of the saddest stories of the second World War, and then the story of Bettina’s mother and her lifelong pilgrimage to set history right.”

That story begins in the 1930s, when Burr’s mother was living with her parents, the Baron and Baroness Alphonse and Clarice de Rothschild, in their Viennese palace, across from Alphonse’s brother, Baron Louis de Rothschild, who ran the family bank.

The Austrian branch of the Rothschild dynasty had by then amassed a vast fortune, playing a crucial role in the country’s industrialization through involvement in banks, mining, and railroad concerns. The family had also accumulated one of Europe’s greatest art collections.

“They said it was on a par with what the Prince of Lichtenstein collected,” said Burr, 68.

But Alphonse’s great passion was philately — the study and collection of postage stamps — and in March 1938, he and Clarice traveled to London to visit an exhibit he had loaned several important stamps.

As they were traveling, however, Hitler’s army seized the family property during the Anschluss, when the Third Reich annexed Austria to Nazi Germany.

“My grandparents cabled the house and urged the staff to get the girls out immediately,” said Burr. By the next day, Burr’s mother, then 13, and aunt were on a train to Switzerland. “They came to Innsbruck,” Burr said. “That’s when my mother remembered hearing screaming on the platform, and what they were screaming was, ‘All Jews off the train!’ ”

The sisters spent the day in jail, but were finally allowed to leave. As it turned out, the Nazis had arrested Alphonse’s brother, Louis, as he attempted to flee Vienna.

“The Nazis were determined to get their hands on the vast wealth of the Austrian branch of the family — in particular coal and iron mines we had in Czechoslovakia to fuel the Nazi war effort,” said Burr. “With Louis in captivity they knew they could get a bigger ransom than they might have with the little girls.”

The Nazis held Louis for more than a year, as Alphonse and his family used the proceeds from the sale of his stamp collection to travel from Switzerland to England, Canada, and finally the United States.

“The Nazis systematically negotiated with the family to trade the bank and all other properties and assets — including foreign assets — in return for Louis’s life,” said Burr.

The Germans commandeered the brothers’ palaces as Nazi headquarters. But Hitler — himself a failed artist — had special plans for the family’s art: A cherry-picked selection would help fill the Führermuseum, the dictator’s long-envisioned museum in Linz, whose collection, he hoped, would rival the Louvre’s.

As Allied forces began bombing Vienna, however, Hitler’s troops moved the collections to the salt mines west of Vienna at Altaussee.

“Hitler had the right of first refusal to everything,” said Victoria Reed, the MFA’s curator of provenance. “He had art advisers who put together photo albums for him to look through and make selections. So while he is taking over Europe, he is also building up this museum collection. Every time these things were moved, they were documented and inventoried. They kept very good records.”

After the war, Burr’s family returned to Austria to see what they could recover. The houses were ruined, filled with terrible memories, and the family sold them for “a pittance,” Burr recounted. The art, however, was in good condition. “The Nazis regarded these as prime assets, so they actually were well cared for,” said Thomas Michie, an MFA curator who is overseeing the exhibit.

The Allied team known as the Monuments Men catalogued the work, and by 1949 Burr’s father, a diplomat with the US Foreign Service, was able to cable “Geronimo!” to her grandmother. But owing to a 1918 Austrian law, the family was forced — if it wanted to export its recovered collection — to relinquish 250 of its finest objects to the Austrian government, including many Old Master paintings and an illuminated prayer book.

“It was presented as an opportunity to donate works to the collection in memory of her husband,” said Burr, whose grandfather Alphonse died in 1942. “It was pure robbery, but what could they do?”

Burr said that for the next 50 years, her mother often traveled to Austrian museums, heading into basements to inspect the works and talk to curators.

“It was a lost cause,” said Burr. “She did not think there was a ghost of a chance.”

Then in the late 1990s, the Austrian minister of culture abruptly reversed course following an international outcry over the disputed ownership of two Egon Schiele paintings then owned by the Austrians.

“My mother picked up the phone,” said Burr. “The minister of culture said, yes, there was a legal contract, but morally it was wrong, and therefore we are going to make amends.”

The Rothschild heirs began receiving the other 250 works in 1999, and as the trucks made their way out of Austria and into Switzerland, the drivers phoned Burr’s mother. Their message? “Geronimo!”

Many of those restituted pieces were later sold at auction, fetching an astounding $89.9 million. Those that remain help form the MFA gift, which includes 14 promised works. (The jewelry in the MFA gift never fell into Nazi hands, Burr explained, because her grandmother had worn it to England.)

Burr began discussing the gift with her mother a few years before her death in 2012.

“We both agreed that it would be a good thing to do,” Burr said. “The pieces are here together. They’re not going to different corners of the world to be hidden in some grandee’s living room. They’ll be here if people want to see them, and I know they’ll be cared for.” 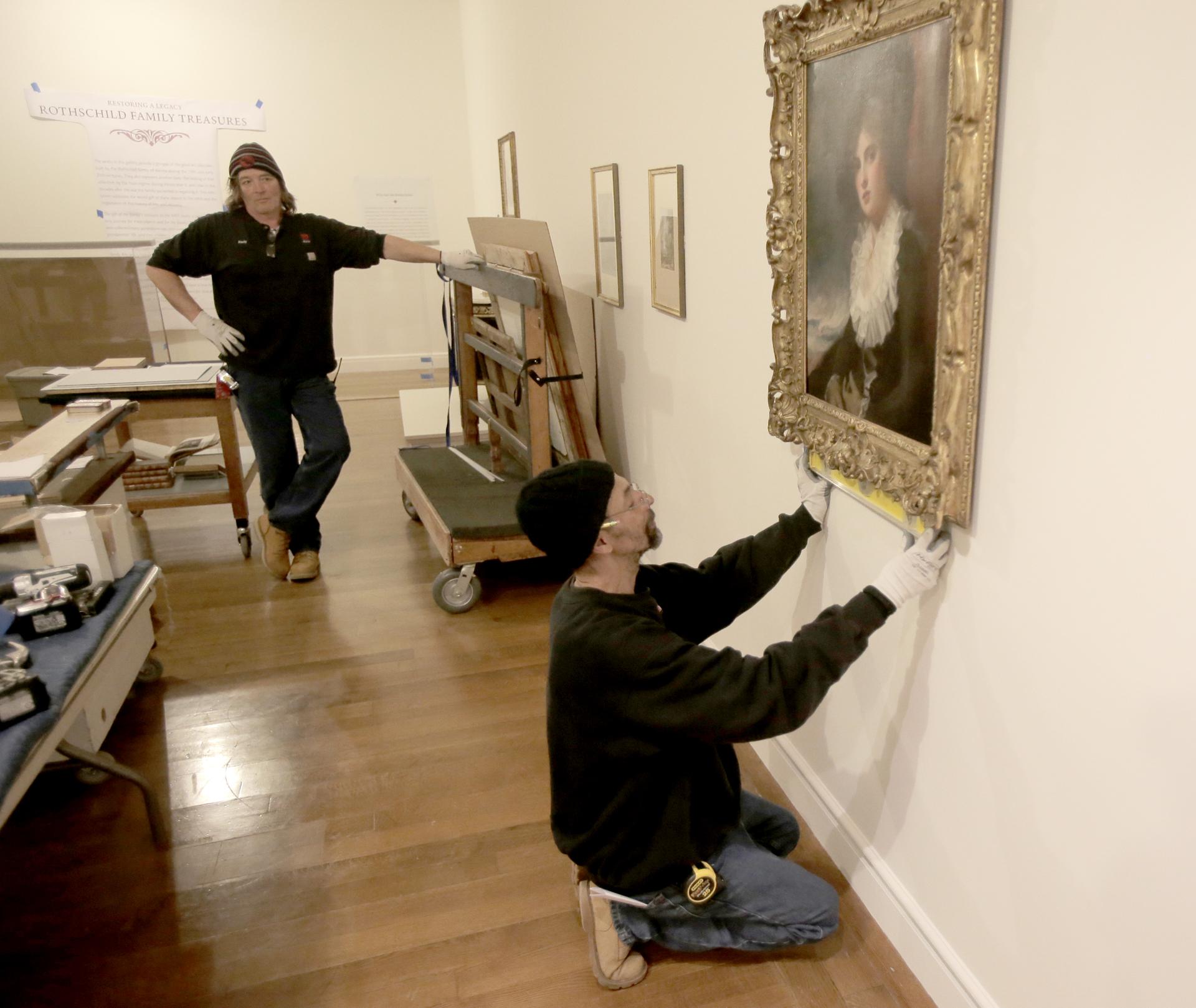