Helen Mirren praises 'human story' of the quest to return Nazi-looted art to their rightful owners upon film's premiere. 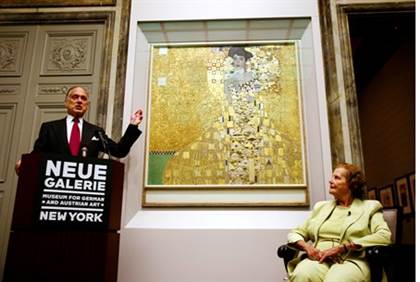 Oscar winner Helen Mirren presented her new movie about Nazi-looted art in Berlin on Monday, saying Germany and Austria should not rest until all the works are returned, according to AFP.

Mirren plays Maria Altmann, who fought the Austrian government for years to secure the return of five Gustav Klimt paintings stolen by the Nazis from her Jewish family during World War II.

They include two stunning portraits of Altmann's aunt Adele Bloch-Bauer, completed with gold leaf, as well as three landscapes.

She "was such a remarkable, wonderful, funny, sexy, witty, humane...a great, great woman," said Mirren, who picked up an Academy Award for her portrayal of Elizabeth II in 2006's "The Queen."

"I didn't know if I'd be able to do her justice, because she deserved it," she said of Altmann.

The case brought to light the issue of the Nazis' systematic plundering of cultural treasures, an estimated 100,000 of which are in the possession of the world's great museums, hidden away in private collections or lost forever.

Asked about the progress made by Germany and Austria in coming to terms with the issue, Mirren said she saw progress but added: "We mustn't ever feel that we've come to the end of that particular human journey."

'Story in one image'

In the film, directed by Simon Curtis, Mirren plays Altmann as an elderly woman living in Los Angeles who enlists the grandson of Austrian composer Arnold Schoenberg, a California lawyer played by Ryan Reynolds, to accompany her back to Vienna to take on the Austrian authorities.

The story is also told in lushly shot flashbacks beginning with Klimt, played by German actor Moritz Bleibtreu, painting Adele, until Altmann was forced to flee Austria after Hitler annexed the country in 1938.

Mirren said she visited the Belvedere during the shoot and discovered the haunting, unfinished Klimt painting of Amalie Zuckerkandl, who was later killed at the extermination camp Belzec.

"In a way I found that just the most emotional thing to see," Mirren said, fighting back tears. "To me that brings all of the whole story together in one image."

Mirren, who was previously unfamiliar with the Altmann case, said that now, almost a decade on, Austria understood its moral implications.

"Vienna was enormously welcoming to us to shoot -- there was never any sense of resentment or anger or anything," she said. "They said 'we are grateful to Maria Altman here in Vienna because she made us look at our past in a realistic way and take on board things that we had never taken on board before'."

Altmann sold the 1907 iconic gilt "Portrait of Adele Bloch Bauer I" to makeup magnate and philanthropist Ronald Lauder for $135 million dollars, then the highest known price ever paid for a painting. It now hangs on permanent display at Lauder's Neue Galerie museum in New York.