A Gurlitt painting waiting to be restituted: View of the Seine from the Pont-Neuf, by Camille Pissarro

One of the paintings found in the infamous Salzburg Depot in Western Austria which were part of the art collection of the late Cornelius Gurlitt is a view of the Seine from the Pont-Neuf by Camille Pissarro. It turns out that this painting had been stolen from a safe deposit box owned by the late Max Heilbronn and his family after they had fled Paris. The painting turned out to be a perfect match with the one listed in documents illustrating the plundering ways of the Einsatzstab Reichsleiter Rosenberg in France between the fall of 1940 and the summer of 1944.

The painting can also be found on page 257 of the Répertoire des biens spoliés en France as still missing.

Please find some of the relevant documents concerning this painting so that you can appreciate how the historical evidence comes together to demonstrate that a theft took place and restitution becomes the order of the day.

The ERR inventory list tells us that the late Max Heilbronn had an apartment at 1, Place de l'Alma and a safe deposit box at the Crédit commercial de France in Mont-de-Marsan, in southwestern France. The Devisenschutzkommando (DSK) sent agents down to the CCF to remove the Heilbronn collection from its safe and transferred it to the ERR in Paris. The removal took place before February 13, 1941. The  ERR assigned to the painting the title of "Ansicht auf Paris, 1902" under the moniker of "Heilbronn 7."

A card was then created for this painting confirming that it had been officially processed and indexed at the Jeu de Paume, in Paris, a central sorting, cataloguing, displaying, and shipping point for cultural and artistic objects plundered in Paris, the neighboring regions and selected parts of France (Bordeaux region in particular and Nice). You can find more details on the ERR database. 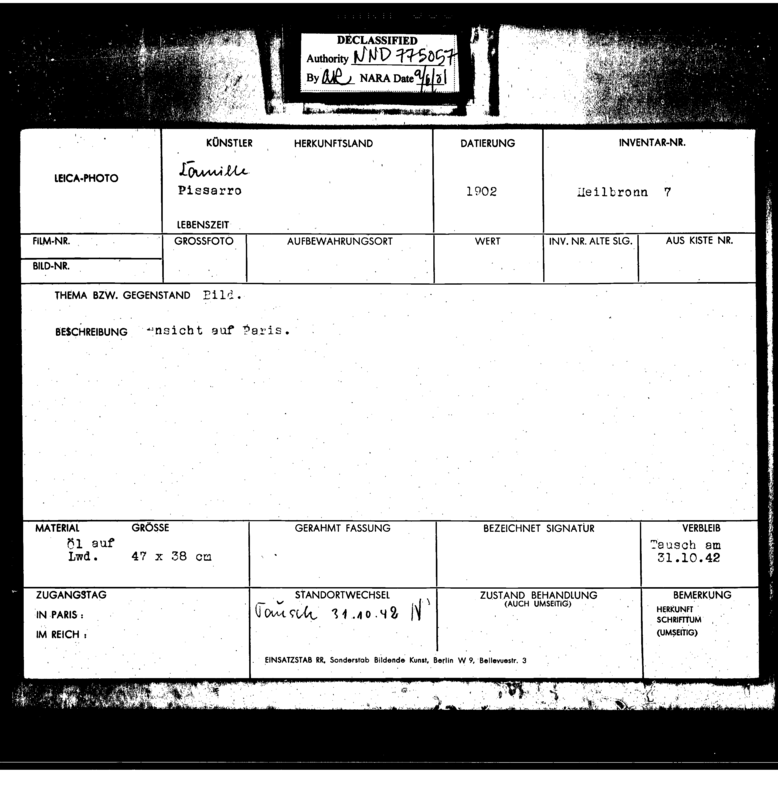 The painting was placed on an easel and photographed.  The use of the easel is most closely identified with the Louvre annex where most objects were stored and which served as a glorified warehouse for the ERR art historians from which they would retrieve objects, bring them to the Jeu de Paume for processing and then return them to the Louvre where they awaited their fate. 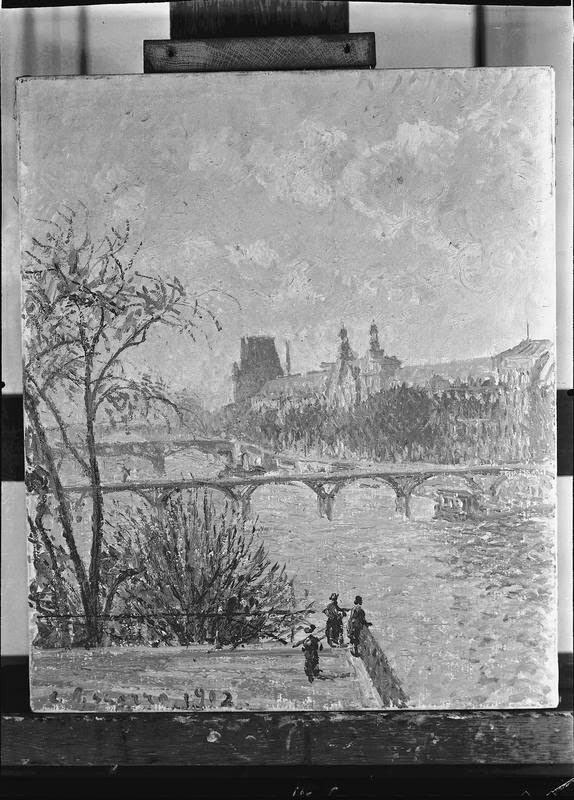 Mrs Tomforde completed the Heilbronn inventory in July 1942.  On October 31, 1942, the Pissaro view of Paris from the Pont-Neuf was subject to the 23rd exchange (Tausch) engineered by Bruno Lohse, deputy commander of the ERR plundering unit in Paris and Gustav Rochlitz, a German dealer based in the rue de Rivoli in Paris who came up with the concept of the exchanges and proposed them to Lohse as an efficient way of unloading "modernist" works in exchange for Old Masters more coveted by the Nazi hierarchy in Berlin.

At this point, the painting vanishes.  Since we know that Hildebrand Gurlitt, father of Cornelius Gurlitt, obtained the painting and that he traveled frequently to Paris, one should presume that Gurlitt acquired the Pissarro work in Paris either directly from Rochlitz or through a mutual acquaintance.

After the war ended, the Heilbronn heirs filed a claim with the French government and reported their cultural losses to the Commission de recuperation artistique (CRA) set up to investigate cultural losses and facilitate restitutions to rightful owners.

The painting only resurfaced in the spring of 2014 upon the discovery of the Salzburg Depot. To view the work go to the website of the Kunstmuseum Bern and download the list for Salzburg.