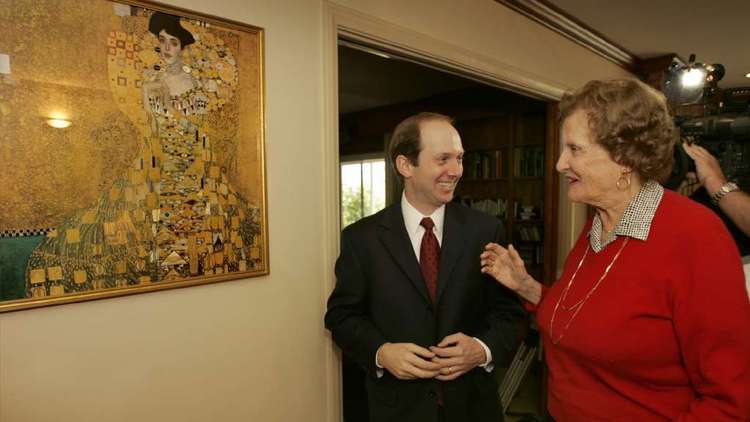 Randol Schoenberg and Maria Altmann in 2006, standing beside a reproduction of Gustav Klimt's painting "Portrait of Adele Bloch-Bauer I" that hung in her Los Angeles home.

Like wars, movies about real, living people have a home front.

All is quiet on that front for Los Angeles attorney E. Randol Schoenberg, who starred in one of the great battles in art-law history, as he awaits the release of “Woman in Gold,” which tells that tale on the big screen. It’s scheduled to premiere Feb. 9 at the Berlin International Film Festival and open in U.S. theaters April 3.

The only people leery about those dates, Schoenberg said, are his teenage son and daughter, who have been coping with that common adolescent malady, fear of being publicly embarrassed by one’s parents.

Never mind that their parents are being played by “X-Men” and “Green Lantern” heart-throb Ryan Reynolds and Katie Holmes.

Watch the trailer for "Woman in Gold," a story of how Los Angeles attorney E. Randol Schoenberg recovered prized Nazi-looted paintings by Gustav Klimt for Maria Altmann, a close friend of his family.

“The 14-year-old said, 'I’m so glad none of my friends have said anything,’” said Schoenberg.  His 16-year-old daughter missed the screening of a preliminary edit the family saw because she had homework to do but apparently shares her brother’s worries.

“But the 10-year-old thinks it’s great. He can talk of nothing else,” he said.

“Woman in Gold” is about Schoenberg's taking on a seemingly hopeless case for a family friend, Maria Altmann, who was trying to recover five prized paintings by Gustav Klimt that Nazi authorities in Austria had stolen in 1938 from Altmann’s family.

Altmann, who's played by Helen Mirren, had been the best friend from childhood of Schoenberg’s maternal grandmother. Like Schoenberg’s famous grandfathers, composers Arnold Schoenberg and Eric Zeisl, Altmann fled Austria for the United States before World War II broke out, escaping the fate that claimed two-thirds of Europe’s pre-war Jewish population.

After a nearly seven-year struggle against the Austrian government, a complex two-continent legal fight that included a crucial hearing before the U.S. Supreme Court, Schoenberg and Altmann won big in January 2006.

Altmann, who died in 2011 at 94, sold the paintings for a combined $327.7 million (although a chunk of it went to Christie’s auction house) -- including a then-record $135 million for the startling vision in gold of her glamorous aunt, Adele Bloch-Bauer, that gives the film its name.

The gold painting, officially “Portrait of Adele Bloch-Bauer I,” was sold privately to New York’s Neue Galerie of early 20th century Austrian and German art in a deal bankrolled by its founder, cosmetics heir Ronald Lauder.

Schoenberg said he began sketching a scenario for a movie about the case on his flight to New York for the November 2006 auction of the four other paintings -- three landscapes and a later vision of Adele Bloch-Bauer in hues of bluish green.

When Schoenberg optioned his “life rights” in 2010 for a film by the English director Simon Curtis, he did not insist on controlling the story.

He claims no expertise about the movie industry, “but this much I know about Hollywood: If I wanted to retain control, no one would ever touch it. You won’t be able to get good people involved if it was my artistic product, not theirs, so I took a laissez faire approach.

"I knew the material was good, and if they had any sense they’d make a good movie. You’ve got Nazis, you’ve got court scenes -- it’s such a delicious story, no one could screw it up as long as they remained true to it,” Schoenberg said.

As screenwriter Alexi Kaye Campbell developed a script, Schoenberg said, “I would give them comments on the drafts, whether they wanted them or not, and I wasn’t hurt if they didn’t accept my comments. Most of them were pretty minor.”

Schoenberg said he had just one worry -- not about how he would be portrayed, but about the handling of events surrounding the creation of Klimt’s 1907 gold vision, which is nearly 5 feet high and 5 feet wide. Klimt and Bloch-Bauer, who’s played by German actress Antje Traue, are believed to have been having an affair at the time he first painted her.

“My fear was that they’d make it too sexy,” Schoenberg said. “Klimt almost lends himself to that -- he has this animal magnetisim, sired 18 kids and painted in a smock with nothing underneath. They could have made it into a sex romp -- but there isn’t anything like that at all. It’s really Maria and the Randy character and their relations, and Maria has flashbacks to her past. It’s a little bit about Adele, but mainly it’s about Maria and her experience, because her story is incredibly rich.”

Schoenberg, 48, said he had no idea who Reynolds was when the actor was chosen to play him. “I joke about it with all the people I talk to who, like me, are not his demographic. If you are male and over 40 years old, you probably don’t know who Ryan Reynolds is. If you talk to a female, any female, [she] will know.”

Actor and lawyer met in L.A. one day when Schoenberg visited the set. “I was dressed in khakis and a long sleeve shirt, and he walked over and looked at me and was wearing the exact same outfit. He said, 'Nailed it! They dressed me as you.’”

Schoenberg said that a British tabloid ran a still from the set of Reynolds in character, under the caption, “Geek Chic.”

“My siblings have been ribbing me about that,” he said. “I’ve heard the 'geek’ part before, but not the 'chic.’ Being associated with Ryan Reynolds has definitely elevated how people think about the way I dress.”

Part of the film’s drama -- and this is where domestic scenes between Reynolds and Holmes will come in --  concerns how the young attorney, then 32, faced a choice early on between pursuing the Klimts or sticking with the big law firm where he says he was earning $160,000 a year.

Schoenberg took the gamble -- there’d be no money from Maria Altmann’s case unless he won -- and says he made $20,000 the first year, trying to cobble together a living from cases he took on the side.  After that, Schoenberg said, he joined a partnership that gave him a salary and the freedom to pursue the Klimts.

“I had one baby and another on the way,” recalled Schoenberg, who’s board president of the Los Angeles Museum of the Holocaust. “It was a crazy thing to do, but it seemed like it was what I needed to do.”

He said his wife, Pamela, who is played by Holmes, is satisfied with how they both come off. “Everything is fictionalized a little bit. It was strange for her as it is for me, seeing things as they sort of happened in real life, portrayed as a scene in a movie. She was probably more worried than I was, and equally pleased with the outcome.”

Schoenberg, whose victory established him as one of America’s leading art-restitution lawyers, doesn’t want to forget how close the movie came to never being made -- not because of studio politics, but because of how precarious the outcome was for Republic of Austria vs. Altmann.

“I always try to remind myself that it didn’t have to have a happy ending,” he said. “It could be, 'You lose, and you don’t get anything.’”