The inside story of how a major World War II-era German collection ended up in an obscure Swiss museum. 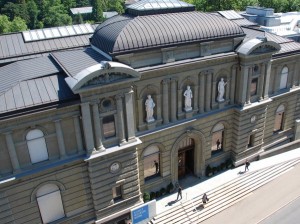 Exterior view of the Kunstmuseum Bern;

Late in 2013, the art world was roiled by the revelation that a treasure trove of paintings and drawings assembled during the Nazi period was discovered in an apartment in Munich belonging to an elderly recluse, Cornelius Gurlitt. But more than a year later, key controversies surround the so-called Gurlitt collection—the largest such find in decades of artworks that were considered lost or hidden away in the aftermath of World War II. Among the issues still being debated are how many of the works can be considered looted art and subject to restitution to heirs of the original owners; what is the market value of the collection; and why did the late Cornelius Gurlitt bequeath it to the Kunstmuseum Bern, an art institution little known outside Switzerland.

The events leading to this great stroke of luck for the Kunstmuseum Bern were set in motion several years before. On the warm afternoon of September 22, 2010, the train from Bern to Munich skirted Lake Constance and stopped at the Swiss-German border. A pair of German custom officers boarded and walked down the train car aisles picking out passengers at random for questioning. Tax evasion had become a red-hot issue between Switzerland and its neighbors, and the German government was determined to ensnare citizens who kept secret Swiss bank accounts or returned to Germany carrying more than €10,000 worth of undeclared currency.

The two customs agents stopped next to a frail, snow-thatched 77-year-old, Cornelius Gurlitt, and asked that he show his cash. He was carrying 10,800 Swiss francs—the equivalent of €9,000, or below the reporting limit. But the agents’ suspicion was aroused anyway, because few passengers traveled with so much hard currency. They took down Gurlitt’s passport information and continued down the aisle checking other passengers. The old man probably thought the incident was closed. But the agents’ report sparked further inquiries by the German tax authorities. They concluded that Gurlitt, who owned a small Munich apartment, had no obvious income. And on September 23, 2011, a year after his train journey, the district court of Augsburg obtained an investigation and confiscation warrant for the Munich residence. Gurlitt himself was unaware of the warrant, until it was exercised on February 28, 2012.

On that morning, court officers entered the apartment. Its windows were papered over and curtained to keep out sunlight. Stacked against the walls and piled in dusty heaps was a hoard of 1,278 drawings and paintings, including works by Courbet, Cézanne, Monet, Renoir, Matisse, Picasso, and the major German Expressionists. Many of the works were believed to have been lost during World War II. Incredibly, the German authorities kept the discovery secret, while they allegedly tried to determine the provenance of the works.

The trove’s existence was finally made public by the German magazine Focus on November 3, 2013. The ensuing uproar in the art world indicated that the German government in fact failed to consult with any major international agency or curator involved in the recovery of art suspected to have been stolen by the Nazis. But the Focus article finally induced the German authorities to organize a task force to address some of the major questions raised by the Gurlitt collection.

The task force determined that the bulk of the collection was assembled during the Nazi era by Cornelius’s father, Hildebrand Gurlitt, one of the leading agents for the acquisition and sale of art for Hitler’s regime. But the task force also announced on November 19, 2013, that any of the art with legal provenance would be returned to Cornelius Gurlitt. Two months later, on January 28, 2014, the German task force revealed that 458 works in the collection were being set aside on suspicion of having been looted from museums and private collectors.

Two weeks later, on February 10, 2014, Austrian authorities found an additional 238 paintings and drawings in a second Gurlitt residence, in Salzburg. That brought the total Gurlitt collection to 1,516 works. With his health failing and pressure mounting to surrender control over the collection, Gurlitt instructed his lawyers to negotiate with the German government. On April 7, 2014, he agreed to voluntarily return to their rightful owners all works deemed by the German task force to have been looted. He died a month later, on May 6, 2014, at the age of 81.

The following day the terms of Gurlitt’s will were disclosed. Childless and unmarried, he had named the Kunstmuseum Bern as the sole heir to his collection. Playing it cautiously, the museum said it would announce whether or not it would take possession of the art by the end of the year. And on November 24, 2014, it finally declared that it would accept the Gurlitt inheritance, with the exception of those works that were deemed to have been stolen. Those would remain behind in Germany until their original owners or their heirs were located.

Gurlitt’s choice of the Bern museum startled the art world. Though Switzerland’s oldest museum, it is by no means ranked among the top European art entities. There are at least two other Swiss museums—the Kunstmuseum Zurich and the Kunstmuseum Basel—whose collections are considered of superior quality. Bern museum officials were themselves flabbergasted. A museum press release on the day the Gurlitt testament was made public asserted that “the news came like a bolt out of the blue since at no time has Mr. Gurlitt had any connection with Kunstmuseum Bern.” According to Christoph Schäublin, president of the board of trustees, accepting the collection was a difficult decision. “It did not trigger any feelings of triumph,” he said in a statement. “That would have been totally inappropriate in the face of the history overshadowing the collection.”

So why did Gurlitt choose Bern? The Gurlitt family in fact had a long association with Switzerland and with Bern in particular. Both before and during the war, Hildebrand Gurlitt traveled often to Switzerland to sell art on behalf of the German government, prominent Nazi officials, and himself. Many of the sales involved Impressionist and Modern works. But they also included German Expressionist drawings and paintings, denounced as “degenerate art” by the Nazis, who nonetheless gladly accepted any proceeds earned by Hildebrand Gurlitt on the Swiss market.

After the war, Hildebrand continued to have art dealings in Switzerland. An acclaimed temporary exhibition at the Kunstmuseum Luzern in 1953—titled “Deutsche Kunst: Meisterwerke des 20. Jahrhunderts” (“German Art: Masterworks of the Twentieth Century”)—included 24 German Expressionist works. Hildebrand later sold some of them to private collectors and kept the rest in his collection back in Munich. His son, Cornelius, also traveled to Switzerland both before and after the war. His favorite uncle, Willibald Gurlitt, was forced by the Nazis to give up his faculty position at the University of Freiburg im Breisgau, and became a professor at the University of Bern, where Cornelius frequently visited him.

As Cornelius grew older, he became increasingly withdrawn, spending much of his time closeted with his collection in his Munich and Salzburg homes. To supplement what little income he had, he traveled to Switzerland to sell drawings that he could easily hide in his train baggage. One of his buyers was Eberhard Kornfeld, owner of Galerie Kornfeld in Bern, the most prominent auction house in Switzerland. Kornfeld admitted purchasing four German Expressionist drawings from Gurlitt in 1990, works that the auctioneer said were seized by the Nazis as “degenerate art” from German museums and thus not subject to restitution.

Besides his towering stature as a dealer, “Ebi” Kornfeld has exercised great influence at the Kunstmuseum Bern as adviser on exhibitions, fund-raiser and lobbyist. This has led to speculation that he served as an intermediary for Gurlitt in arranging the transfer of the collection to the Bern museum. Asked whether he in fact played such a role, Kornfeld replied, cryptically, “I might have had something to do with it, yes.”

Aside from his longtime ties to Bern, Gurlitt was also increasingly disinclined to leave any portion of his collection in Germany. A German museum official speculated that Gurlitt had grown bitter at German authorities. “They made his last few years miserable,” said the official. “Here is this old recluse suddenly in the public glare as a tax evader and secret owner of art supposedly stolen by the Nazis. His collection is taken from him until its provenance can be determined and he never sees it again. It’s easy to understand why he chose Bern over any German museum.”

The non-Swiss international media has trumpeted the notion that the Kunstmuseum Bern is a second- or third-tier institution unsuitable for a collection of the size and importance as the Gurlitt hoard. The museum has a dull, graceless neo-classic façade, dominated by statues of the muses of painting, sculpture and architecture. Above these marble figures is a temporary installation in white neon lettering by the Greek artist, Nakis Panayotidis, that reads, VEDO DOVE DEVO, Italian for I SEE WHERE I HAVE TO. But inside, the ample gallery space and breadth of the museum’s collection are impressive. Among the artists represented by at least one quality painting are Monet, Cézanne, Van Gogh, Munch, Matisse, Picasso, Gris, Bonnard, Klee, Kirchner, Mondrian, Chagall and Pollack. The museum’s curatorial staff is considered among the best in Switzerland.

Just as critical estimates of the Kunstmuseum Bern’s merits have risen on second look, the Gurlitt collection has fallen short of initial excited appraisals. To be sure, it includes first-rate Impressionist and modern works. But the collection is dominated by drawings rather than paintings. It includes many amateurish works by Gurlitt relatives. Early estimates that the collection’s market value was above $1 billion seem far overblown.

Worries over the illicit provenance of the art also appear to be exaggerated. The Kunstmuseum Bern now believes that only about 10 works were looted—a tiny fraction of the 458 works that the German task force initially suspected of having been stolen by the Nazis from museums and private collectors. The only looted works publicly disclosed thus far are Camille Pissarro’s Paris Cathedral, Max Liebermann’s Two Riders on the Beach, Henri Matisse’s Seated Woman and Carl Spitzweg’s Piano Playing. All four will be returned to the descendants of the rightful owners.

Far more problematical are the many works that artists and collectors were forced to sell at humiliatingly low prices before fleeing Nazi Germany. Unquestionably, a large proportion, if not a majority, of the Gurlitt collection falls into this category and is not eligible for restitution.

Initially, the German government came in for withering criticism for not revealing the existence of the Gurlitt collection for almost two years. But since then, management of the collection, including the search for looted art, by the German authorities and the Kunstmuseum Bern has been widely praised by individuals and organizations linked to the restitution of stolen art works—including most prominently, Ronald S. Lauder, president of the World Jewish Congress, and Stuart E. Eizenstat, the special adviser on Holocaust issues to Secretary of State John Kerry.

The Kunstmuseum Bern is moving at a very deliberate pace to take possession of the Gurlitt collection. It expects to receive a first batch of art works in the first half of 2015, and has not yet announced a timetable for the remainder.