Wanted: a new generation of Monuments Men for US army 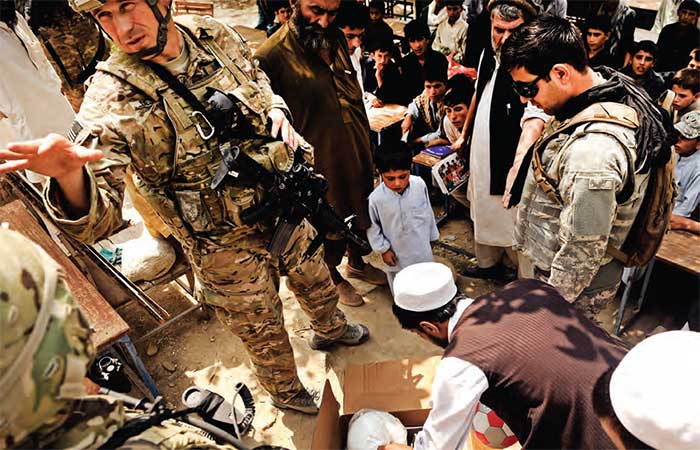 Lieutenant Colonel Andrew DeJesse (left), who is also an artist, is now on his second tour of Afghanistan as a civil affairs officer. Photo: US Air Force/Staff Sgt Ryan Crane

The US Army is looking to recruit the next generation of “Monuments Men and Women” to help preserve sites and cultural property in combat zones and to advise troops on heritage. After years of war in Afghanistan and Iraq, and a new conflict in Syria, including the large-scale looting of ancient objects and the intentional destruction of heritage sites, the army recognises the need for experts in the field to advise commanders and work with civilian authorities after battles to help restore order. It is turning to museum directors, archaeologists and preservationists to fill these posts.

Dating back to the original Monuments, Fine Arts and Archives programme established during the Second World War, the army has had cultural affairs officers to support preservation efforts in countries where US troops are involved. But for years, this was reactive—responding to the looting of the National Museum of Iraq in Baghdad after the US-led invasion in 2003, for example—or relied on the efforts of individual soldiers.

“The civil affairs units have always had ‘functional specialists’, but the individuals were often not qualified in any meaningful way. At the same time, if you have one person who was just the right fit, you probably didn’t have two of them. It was just a broken system,” says Brigadier General Hugh Van Roosen, the director of the Institute for Military Support to Governance (IMSG) at Fort Bragg, North Carolina.

The shortage of cultural experts in uniform is partly because the military, which is now less than 1% of the civilian population, is small compared with the US army in the Second World War, says Corine Wegener, the cultural heritage preservation officer at the Smithsonian Institution, who served as an arts, monuments and archives officer during the 2003 war in Iraq. “Unlike [the Second World War], we don’t have a draft, and you don’t have every kind of person joining the military,” Wegener says. “Today, it’s an all-volunteer, professional military force, and not many art historians are super-excited about enlisting.”

With extremist groups such as Islamic State using the destruction of cultural heritage as a tool of war, such expertise is needed more than ever. “Cultural property protection touches every aspect of military operations,” says Laurie Rush, a board member of the US committee of the Blue Shield, a non-governmental organisation that co-ordinates with the military to preserve heritage during conflicts. “As the military are planning, they have to think: ‘What are the places we’re going to protect in the course of those activities?’” The problem, as Rush points out, is that “a good defensive position 6,000 years ago is probably still a good defensive position”.

IMSG now wants civilian experts in fields ranging from agriculture to telecommunications, and including cultural heritage preservation, to fill a new officer designation in the US Army Reserve, known as a “38G”. More than 500 existing civil affairs positions are due to be reassigned as these specialists from 1 October. The IMSG will first look within the military to fill these posts, but expects “the bulk of these people to come as direct commissions”, Van Roosen says—meaning civilian experts who would join the Army Reserve as officers.

“We are looking at individuals who would advise and assist at the national or multi-national level,” Van Roosen says, adding that this would probably be someone with a doctorate and ten years of experience who is widely respected within their field of expertise, “at least” on the level of a museum director. “We’ll take individuals and add additional training to ensure they can operate effectively in that international environment.” This will include psychological testing, “to ensure people are a good fit for the mission”, Van Roosen says. “We really need to make sure we have the right people who are plugging in at the ministerial level in a country.”

The early response from the cultural property community has been positive. “I think it’s a terrific idea,” says the archaeologist C. Brian Rose, the curator-in-charge of the Mediterranean section at the Penn Museum of Archaeology and Anthropology. He would also push for cultural heritage training to be made a mandatory part of pre-deployment training for all US troops, as it is for Reserve Officer Training Corps and civil affairs officers.

“I think it’s really overdue,” Wegener says. “We have a lot of talent that’s already serving in the military today and we particularly seem to have a plethora of archaeologists in uniform. So it’s important that the IMSG programme is advertising to them, saying: ‘Come over here, because we could really use your cultural heritage skills.’” As for any art historians or curators curious about joining the ranks, Wegener reminds them: “You are still in the military, you could still get deployed whether you want to or not. All the same rules apply, just as they did for the original Monuments Men.”

Van Roosen says that it has not yet been decided where the 38G specialists will be assigned. “I have my druthers on that, but I have to convince some three- and four-star generals that my ideas are good,” he says. The traditional army reserve has monthly drills and is occasionally sent into combat, but there are part-time officers known as “individual mobilisation augmentees” who are brought in for training and deployments when needed. “That may be the better fit for this group of individuals,” he says.

Lieutenant Colonel Andrew DeJesse, currently stationed in Kabul, is on his second tour of Afghanistan as a civil affairs officer working to protect the region’s cultural heritage. An artist himself, who received a BFA in illustration from the University of the Arts in Philadelphia and is now based in Texas, he started his military career as an armour officer who “stumbled upon” civil affairs when he rejoined the Army Reserve after 9/11.

For him, cultural property preservation is about more than saving ancient artefacts; it is an indicator of a country’s stability and a route towards restoring peace. “If the government doesn’t want to have international partnerships on heritage, then it doesn’t really want to [co-operate] on anything,” DeJesse says. As a result, “the modern-day Monuments Men and Women have to think not just about the objects—it’s actually about [preserving] the society.”