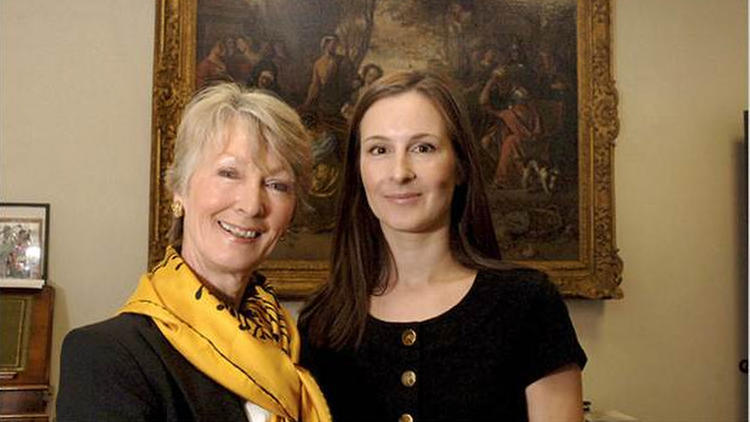 Marei von Saher, seen with daughter Charlene, is in litigation with the Norton Simon Museum over two paintings. (Courtesy of Marei von Saher)

The U.S. Supreme Court dealt a blow to the Norton Simon Museum on Tuesday by refusing to review a legal ruling that has jeopardized its hold on paintings of Adam and Eve from the 1500s that have been among its most prized masterpieces.

The Pasadena museum's attempt to appeal a lower court ruling was denied "certiorari" — the legal term for a Supreme Court determination that it will hear a case because it raises important legal questions that need to be resolved. In keeping with custom, the high court gave no reason for the denial.

Marei Von Saher's lawsuit against the museum contends that "Adam" and "Eve" paintings by Lucas Cranach the Elder should be turned over to her because Nazi invaders looted them in 1940 from her father-in-law, Jacques Goudstikker, a noted Dutch-Jewish art dealer.

The immediate consequence is that the case, which has focused solely on preliminary legal issues since it was filed in 2007, will resume with additional preliminary proceedings before a federal judge in Los Angeles. That judge has twice dismissed the case, only to have his rulings appealed and overturned by the 9th Circuit Court of Appeals.

The museum had hoped that the Supreme Court would overrule the 9th Circuit's most recent decision in June, ending Von Saher's claim. The museum issued a statement Tuesday reiterating that it "remains confident that it holds complete and proper title to Adam and Eve, and will continue to pursue … all appropriate legal options."

Regardless how the court battle over "Adam" and "Eve" turns out, the Supreme Court's non-action establishes the legal theory behind the 9th Circuit's ruling as a binding precedent in federal courts in nine Western states.

Experts on art law foresee a possible nationwide ripple effect for at least some claims to art looted by the Nazis. They say the opinion was the first to give legal force in U.S. courts to the Washington Principles of 1998 and the Terezin Declaration of 2007 — international resolutions that have transformed how several European governments and some American museums and collectors handle claims to Nazi-looted art.

The two accords established a new presumption that governments signing the documents would no longer throw up legal roadblocks to otherwise legitimate claims for the return of Nazi-looted art. The resolutions were not considered legally binding and applied only to claims against artworks held in government-owned collections. But they have often been cited as a new ethical standard for how private museums and collectors who own Nazi-looted art should respond to claims by Holocaust victims and their heirs. 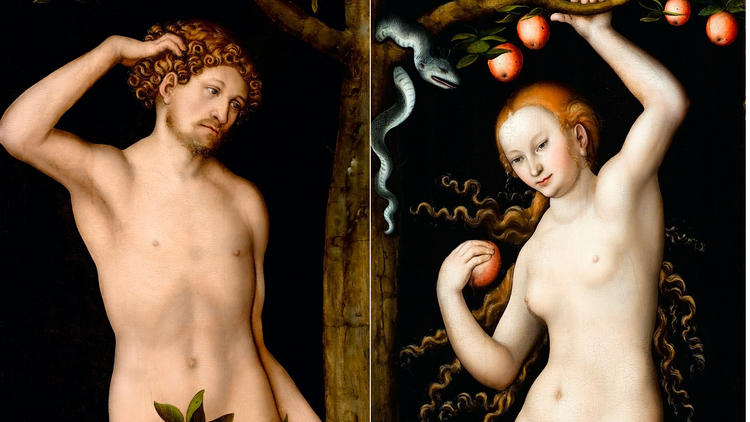 Detail from Lucas Cranach the Elder's 1530 paintings "Adam" and "Eve." The Norton Simon Museum has turned to the Supreme Court in its long legal battle to keep the paintings, which were looted by the Nazis 31 years before the museum acquired them. (Norton Simon Museum)

The 9th Circuit's opinion in June held that U.S. courts should accept the two international accords as a statement of U.S. foreign policy. The Norton Simon Museum had argued that Von Saher's claim should be dismissed because it contradicted U.S. policies dating from the mid-1940s that set up a process for considering claims to art that U.S. forces had recovered from the Nazis. It called for returning them to the countries where they'd been stolen and leaving it to their postwar governments to handle restitution claims.

Vague assumptions about U.S. policy were "starting to become the elephant in the room in Holocaust-era cases," Thomas Kline, a Washington-based attorney whose practice includes looted art claims, said by email Tuesday. The 9th Circuit "declares what the policy of the U.S. government is now on Holocaust-era art restitution and explains that policy in clear and understandable language" that could favor some claimants.

The principles don't say that claims to all Nazi-looted art must be satisfied by handing over disputed artworks, but they call for a fair and just resolution in cases where heirs have legitimate claims.

"Adam" and "Eve" had belonged to Goudstikker, a leading dealer who fled by ship with his family when the Nazis invaded Holland in 1940. He died in a fall aboard the vessel. Hermann Goering, one of Adolf Hitler's leading henchmen, acquired Goudstikker's art in a forced sale by new managers who had taken over his gallery. U.S. forces who discovered Goering's art stash in 1945 sent "Adam" and "Eve" back to Holland in keeping with the postwar art restitution policy.

Desi Goudstikker, the art dealer's widow, did not trust the Dutch government of the 1950s to deal justly with a formal claim to the Cranach paintings and other important works, so she never filed one. They remained in government hands until 1966, when Dutch officials sold "Adam" and "Eve" to George Stroganoff-Scherbatoff, an American heir of Russian aristocrats who claimed he was the rightful owner. He told the Dutch that his family had owned them until the 1920s, when they were expropriated by Soviet authorities. He in turn sold them to museum founder Norton Simon in 1971.

If Von Saher's case were to come to trial, evidence bearing on — and possibly clarifying — the paintings' convoluted journey through decades of tumultuous 20th century history might be presented. Until now, both sides have presented sometimes conflicting accounts of the paintings' history and past ownership in their court filings, but none of those claims has been subjected to the rules of evidence and cross examination of witnesses that's required in a trial.

But John Walter, the U.S. District Court judge in Los Angeles who has handled the case, will have at least one more preliminary legal issue to consider before affirming that the case should proceed to trial.

The 9th Circuit opinion overturning his 2012 dismissal of the case instructs Walter to turn his attention to the Dutch government's handling of "Adam" and "Eve." The appellate judges said he should explore whether a legal principle known as the Act of State Doctrine applies to the paintings.

The doctrine holds that U.S. courts can't take up cases involving the government policies and official actions of foreign governments. One question Walter will consider is whether the Netherlands' 1966 sale of "Adam" and "Eve" to the Stroganoff heir qualifies as a policy action by the Dutch government, possibly motivated by a desire to restore the paintings to him because they had been unjustly taken from his family during the Soviet era. Contrary to the Norton Simon Museum's view, Von Saher contends that the paintings never belonged to the Stroganoff family.