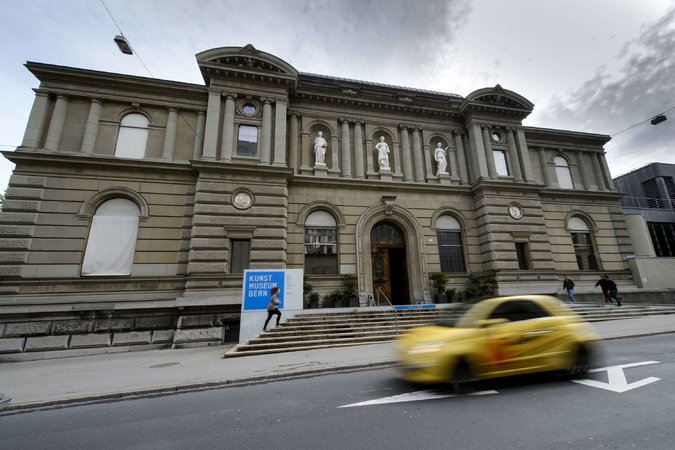 The Kunstmuseum Bern in Switzerland, which revealed a list of the 250 “Salzburg collection” works it has inherited from Cornelius Gurlitt. An earlier 1,300 works were recovered in Munich. Credit Fabrice Coffrini/Agence France-Presse — Getty Images

BERLIN — Minutes after the Kunstmuseum Bern in Switzerland revealed for the first time a list of artworks Cornelius Gurlitt had stashed in his second home near the Austrian Alps, its promise of full transparency seemed to clear away decades of murky silence about a delicate Pissarro painting showing the Louvre in Paris and bridges spanning the Seine.

The picture, listed as “Paris Kathedrale,” was one of 250 artworks included in the “Salzburg collection” of Mr. Gurlitt, who died in May and left his entire estate to the museum.

Researchers at a Jewish organization swiftly noted its resemblance to a painting by Pissarro called “View of Paris” and dated 1902 on the Art Objects at the Jeu de Paume database of works known to have been looted by the Nazis. The apparent match was obvious to the museum as well, its director, Matthias Frehner, said Friday.

“We ourselves recognized that this is looted art,” Mr. Frehner said, promising that “we will do our utmost to arrange for a swift restitution” and that the picture would meanwhile stay with the German task force set up to investigate the provenance of the Gurlitt collection. 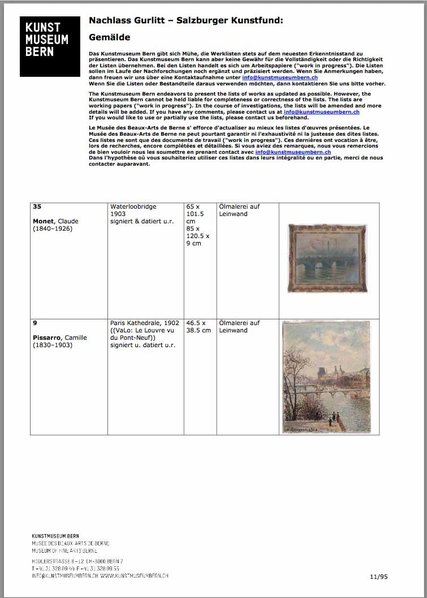 For decades Mr. Gurlitt jealously guarded some 1,600 works amassed by his father, Hildebrand, one of only four Nazi-era art dealers permitted to trade in art looted and banned by the Nazis.

Some 1,300 works were found in Mr. Gurlitt’s home in Munich during a routine tax investigation in 2012, a find first disclosed a year ago. But the collection of some 250 pieces kept in Mr. Gurlitt’s home near Salzburg came to light only in February and was listed publicly for the first time on Thursday.

Art experts and people long interested in the restitution of art looted by the Nazis from Jewish owners or German museums have largely applauded the agreement — reached on Monday among the Swiss museum, Germany and the state of Bavaria — that all but suspect works would go to Bern.

The Swiss have pledged to uphold the international standards set out in the 1998 Washington Principles on dealing with Nazi-looted art.

“Just a little bit of hunting and pecking, and things immediately surfaced,” said Greg Schneider, executive vice president of the Claims Conference, which has long pushed for more transparency regarding the handling of Nazi-looted art. “This underscores the necessity for the research, and it shows us why the transparency is so important.”

Of particular interest were works Mr. Gurlitt had kept in Salzburg. As long as he was alive, he alone could decide their fate, since the German tax authorities had no legal basis to claim them.

After his death at 81, the works fell into legal limbo. Now the Swiss museum has set itself a three-month deadline to comb through the Salzburg collection, which some art experts have suggested is too short a time.

Marc Masurovsky, a historian and co-founder of the Holocaust Art Restitution Project, asked whether the Swiss museum’s word would be final regarding works viewed with suspicion. “Can that judgment be appealed?” he asked in a Thursday posting. “It all sounds very fishy to us.”

Ronald S. Lauder, the president of the World Jewish Congress and himself an avid art collector, as well as a strong proponent of restitution and provenance research, said in an interview that “the Bern museum has played it very correctly, I think.”

“They will take no work of art that there are any questions about,” Mr. Lauder said by telephone from New York, expressing hope that this would also set a new standard for all Swiss dealings on restitution.

Art dealers and auction houses were tight-lipped on Friday about the Gurlitt collection, which, because of its origin, is thought to harbor a hornet’s nest of questions about provenance, making it difficult to attach a value or perhaps to sell.

In Salzburg, the director of the city’s galleries, Anton Gugg, himself an art collector, noted that the pictures listed in the Salzburg trove were of uneven quality. “It is a really mixed bag,” he said by telephone.

Stressing that he had seen only the small reproductions posted on the Internet, Mr. Gugg said the Monet oil of Waterloo Bridge, which the artist painted many times, is probably worth $30 million to $40 million based on auction prices for similar paintings.

A painting by Cézanne of one of his favorite subjects, the Mont Ste.-Victoire, and a Gauguin depicting people slumbering by candlelight appeared to be “first class,” he said. The collection of drawings by George Grosz is also noteworthy, he said.

A lawyer for the heirs of a Dresden, Germany, collector, Fritz Salo Glaser, stressed how much harder it is to track down the heirs for drawings, lithographs or other works on paper that were often stashed in drawers or cupboards rather than hung on walls.

“A child can perhaps remember a picture on the wall,” said Sabine Rudolph, a Dresden lawyer working for the Glaser heirs. And those who were children in the Nazi era are now aged, with possibly faulty memories, she noted. Meanwhile, grandchildren of former owners have no direct memory at all of their forebears’ existence under the Nazis.

Mr. Lauder noted that the investigation into the Gurlitt collection had reopened questions about looted art in Germany. Monika Grütters, the senior German official in charge of culture, “is looking at provenance research at the various museums,” said Mr. Lauder, a frequent visitor to Berlin. “That is a whole thing unto itself, and who should do it? Can a museum monitor itself?”

Mr. Gugg marveled that the paintings had survived at all in what he called Mr. Gurlitt’s “ruin of a house” in Salzburg.

Like other Austrian art experts, Mr. Gugg said that the existence of the Gurlitt collection — which was said by Hildebrand’s widow in the 1960s to have burned during the 1945 destruction of Dresden — was long rumored in art circles.

“That it was a complete surprise, a sensation” was not quite accurate, he said. “In certain circles, it was always known that this collection — or at least remnants of it — existed. There was always a moment of suspicion.”