A Son Seeks Art Looted by the East Germans 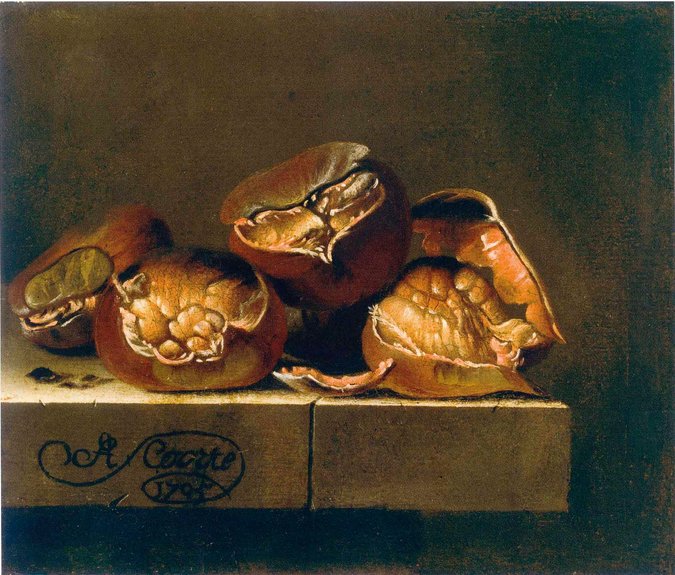 “Still Life With Chestnuts” from 1705, by Adriaen Coorte, was one of the most valuable items seized from Helmuth Meissner's collection in 1982, his son says. Credit RKDArchives/Netherlands Institute for Art History

Just after sunrise on a March morning in 1982, the secret police pounded on the door of Helmuth Meissner, a Dresden art collector known for his refined taste.

Inside, 2,000 works of art that Mr. Meissner had assembled over a lifetime — delicate porcelains, Asian carvings, dozens of paintings — lined the walls and shelves. Outside, four unmarked trucks stood ready to be stuffed with Mr. Meissner’s prized possessions.

Mr. Meissner’s wife, Johanna, would later recall the police barging past her into the kitchen, hauling typewriters, measuring tapes, even their own coffee makers. It was going to be a long day.

While the loss and anguish of Nazi art looting is well known, a second series of German art seizures, decades after World War II, has largely gone unnoticed.

Between 1973 and 1989 the East German police, known as the Stasi, seized more than 200,000 objects in hundreds of raids, according to experts and official archives. As part of a broader government program to secure Western currency through the sale of the art, the police went after collectors like Mr. Meissner, who, when he objected, was sent, at 79, to a psychiatric hospital and portrayed as an enemy of the state. 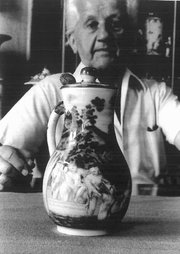 Mr. Meissner in the 1960s with a rare Meissen porcelain jug that was taken in the 1982 Stasi raid but was recovered. Credit Konrad Meissner

But now, Mr. Meissner’s story has resurfaced, as his son tries to reclaim what he says was one of the most valuable items seized from his father more than three decades ago: a 1705 still life of four chestnuts by the Dutch artist Adriaen Coorte. In court filings in Munich, the New York family that now has the painting says that it was bought 25 years ago, legally, in good faith and with no understanding that it had been seized by the Stasi.

Until recently, few Germans realized that the covert program, with its echoes of Holocaust-era looting, had ever taken place in the German Democratic Republic, said Gilbert Lupfer, the lead researcher for Dresden’s state art collection.

“It was very, very, well, elaborate, and also very secret,” he said. “That’s the reason why it was not known in the G.D.R.”

The purpose of the program, according to historians, was purely financial. East Germany’s economy at the time was faltering, and its own currency, the mark, was too weak to be of much use in foreign trade. Selling art abroad through brokers in Western Europe guaranteed a steady stream of cash.

To depict the seizures as legal, the Stasi declared that the targeted collectors were “art dealers” who owed as much as 90 percent back taxes on the value of their so-called stock. Since no East German could pay the outsize tax bills, archival records show, the Stasi would take 90 percent of the best objects instead.

“People like the Meissners were seen as plums ripe for picking,” said Ulf Bischof, a German lawyer who represents Mr. Meissner’s son, Konrad, and specializes in restitution cases.

Too few claims have surfaced so far — perhaps several dozen — to draw conclusions as to whether people who lost items to the Stasi are having as hard a time recovering them as those families whose art was plundered by the Nazis. But within Germany, where the Stasi is vilified for having tormented its own citizens, and where most of its actions were declared illegal after reunification in 1990, Mr. Bischof said, museums, auction houses and individuals he has approached on behalf of claimants have typically turned over items without litigation.

German officials are also now discussing, Mr. Lupfer said, whether to add Stasi-confiscated items to Germany’s Lost Art Internet Database in Magdeburg, an online listing of cultural objects seized under the Nazis that has been used by many heirs to reclaim lost works.

“Art looted under the Nazis remains our foremost issue,” Mr. Lupfer said. “But we must never forget about the objects illegally confiscated by the Communist government of the G.D.R.” In the case of the Coorte, the owner, June D. Weldon, who died last month, appealed to a German court in August to uphold her title to the work. Mrs. Weldon, a philanthropist whose generosity has been acknowledged by museums like the Frick Collection and by Colonial Williamsburg, said in the court papers that, if she holds the same painting that was taken from Mr. Meissner, its seizure had been the lawful action of the government in power at the time.

Its removal “was done under the color of law as a tax forfeiture proceeding,” said Mrs. Weldon’s lawyer, Anthony J. Costantini. “This is not like a Nazi like Goebbels taking something and placing it on his wall.” Art seized by the Stasi was often resold by a front corporation called Kunst und Antiquitäten GmbH (Art and Antiques) that operated as part of a larger Stasi-controlled secret enterprise that brought in as much as $1 billion in hard currency a year through a range of illicit dealings, including hidden arm sales and the ransoming of political prisoners to West Germany. The art exporting arm alone took in as much as $40 million a year.

By the mid-1980s, experts said, the Stasi art squads began running out of collectors to tax, and began swapping low-value East German marks or simple household necessities with people who unknowingly owned an item of high value.

“When they grew really desperate,” Mr. Bischof said “they ripped up the medieval cobblestones from the streets and took the church relics and grabbed the old books from libraries.”

Like the Nazis, though, the Stasi left an exacting paper trail that has helped researchers track the provenance of items seized decades ago.

Mr. Bischof said he used the records to track the chestnuts painting, including a photograph taken by the Stasi during the 1982 raid that shows it hanging on a wall in the Meissners’ home.

Coorte is known to have painted about 100 works, most of them finely detailed still lifes. There is no appraised value for the chestnuts painting, but those Coortes made using the same technique — with oil paint on paper affixed to a panel of wood — have drawn more than $2 million each at auction.

The chestnuts painting that the Stasi seized was shipped to Amsterdam in 1988, the official archives show. Later that year, according to Mr. Bischof, the same painting was sold at auction by Christie’s in the Netherlands for $76,974.

At the time of the purchase, the Weldons had spent several decades amassing a robust collection of Dutch and Flemish masters. Their collection was exhibited at the Walters Art Gallery in Baltimore in 1999. The catalog for the exhibition said the Coorte painting of chestnuts had come from a private collection in the Netherlands and had been shown through Mr. Koetser’s gallery in Zurich, but it did not mention the Meissners or the sale by Christie’s.

Mr. Bischof said he tracked the painting to Mrs. Weldon in 2011 and sent her a letter detailing the Stasi raid, the arrest of Helmuth Meissner, and Mr. Meissner’s confinement within a psychiatric facility, which a German state commission in 1997 called “a clear case of abuse.”

Mr. Bischof also traced for her what he said was the route the Coorte took after falling into Stasi hands. “We hope we can resolve this matter amicably and in an atmosphere of mutual trust and can avoid a bitter and lengthy dispute,” he wrote.

When the negotiations broke down, Mrs. Weldon’s lawyer, Mr. Costantini, filed the legal action in Munich, where Konrad Meissner lives, asking a judge to affirm her ownership and asserting in court papers that nothing presented so far establishes Konrad Meissner’s ownership and that Mr. Meissner “bases his claims on legally incorrect points of view.” Mr. Costantini said Mrs. Weldon’s heirs plan to continue the legal battle to retain the Coorte.

In his brief, Mr. Costantini suggested that perhaps the Meissner chestnuts painting simply resembles a different one in Mrs. Weldon’s collection. But the 2008 catalogue raisonné of Coorte’s paintings, by Quentin Buvelot, which is intended to be a full inventory of his works, does not list any other painting that features four chestnuts and is dated to 1705.

Mr. Meissner, 76, said he is sure the Weldon painting is the one he grew up with. “It is hard not to recall your parents had this work on the wall,” he said, “when you looked at it every day.”