Is the Gurlitt collection so precious we forget its dubious heritage?

The paintings left to Bern Museum by Cornelius Gurlitt, son of a Nazi-era collector, may have strictly speaking been legally acquired but many were seized from Jewish owners 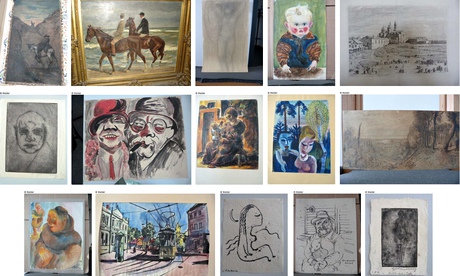 Photos made available by German prosecutors show some of the paintings found in Cornelius Gurlitt’s collection. Photograph: Melder/AFP/Getty Images

The unexpected discovery of a hoard of paintings in a Munich flat owned by Cornelius Gurlitt, son of the Nazi-era art dealer Hildebrand Gurlitt, stirred contrasting emotions. The trove included significant “degenerate” paintings by Picasso, Matisse, Chagall, Dix, Kirchner, and many more. So there was delight at the find. Yet at least some of them had been seized from their Jewish owners. Many felt disgust at the way Gurlitt senior had built up this remarkable collection. Although Cornelius Gurlitt claimed that his father had obtained them all legally, at least 240 of the 1,280 works are now known to have been stolen or looted, or else bought under duress at very low prices. Many of their original owners died in Auschwitz. Cornelius Gurlitt died earlier this year, naming the Museum of Fine Arts in Bern as his sole heir. Now a significant number of the paintings are to be handed over to this Swiss gallery.

There are complex legal issues here, some of which are still unfolding. But what are the moral implications of this case? Most obviously there is a question of what moral force “legally acquired” might have in the context of Nazi Germany and against a background of the Nuremberg laws and systematic racial discrimination that forced many Jews to sell their possessions for whatever they could get for them in an often futile attempt to survive.

We know that the Nazis were obsessed with following rules, but many of those rules were immoral. Simply proving that a transaction was legal within Nazi Germany shouldn’t absolve the purchaser from moral censure. Actions permitted by unjust laws can be evil, and there may be a moral onus on descendants who have benefited from their parents’ immorality to redress the balance even where no law was broken.

It may be extremely difficult for heirs of owners of some of these paintings to prove to a court that they are the rightful owners from a legal point of view, but that doesn’t show that from a moral perspective they aren’t. A spokesperson for the Bern Museum has indicated that they won’t accept any works that are known to be, or are suspected to be, looted, and will return any that can be proved to have been looted; but it is highly likely that some of the works they will accept had morally complex provenances, even though the documentary evidence for this has been lost or destroyed, or never existed.

There is a further question, too, of who should determine the fate of these paintings. Those whose relatives once owned some of the paintings in the original hoard may feel that Cornelius Gurlitt had by his actions forfeited any moral right to determine the fate of other works in this controversial collection, even if they were obtained legally. Why should he of all people be the one who declares this collection should be housed in Switzerland?

But if there is a legal requirement to enact the terms of his will in the absence of proof that remaining pictures were illegally acquired, then making an exception to the law could in itself bring bad consequences.

Yet there is a real question here of whether the decision to enact the terms of Gurlitt’s will was taken on mainly legal grounds. It is unlikely that had he bequeathed the paintings, worth hundreds of millions of pounds, to a far-right organisation, the authorities would have been so ready to act on the letter of the law. It is lucky that he chose a public art gallery as the beneficiary, as this provides a convenient practical way out of an impasse. This is particularly convenient as there is a public interest in unique works of art by significant artists being held in galleries that can conserve and display them. This public interest doesn’t trump all ownership rights (except for those who believe that inheritance is immoral), but where no rightful owner can be found, a museum is the best place for a significant work of art to be housed.

But if the justification for following the law in this case was simply that this provided a convenient solution to a difficult question, that itself raises moral questions. It is hard to claim the moral high ground if you only follow the law when it is convenient for you to do so.