Partially Jewish family of German art hoarder will seek rightful claimants if Swiss museum declines to accept the works
Family heirs to the recently deceased German son of a Nazi-era art dealer, who hoarded hundreds of looted art pieces in his Munich apartment, have pledged to return the works to their rightful owners if they inherit the collection.

In a statement released by the family’s lawyer in Munich, the heirs made a commitment to immediately and unconditionally return the looted art in the event that the collection falls into their hands.

Before dying in May at the age of 81, Cornelius Gurlitt, who possessed the artwork, struck an accord with the German government to help track down the rightful owners, including Jews whose property was stolen or extorted under the Third Reich. But upon his death he named the Bern Art Museum his sole heir.

Earlier this month the museum agreed to accept the bequest of hundreds of works, though it said that a final decision would be made during a board of trustees meeting at the end of November.

If the Bern Museum declines to accept the bequest, the artworks will return to Gurlitt’s family heirs. 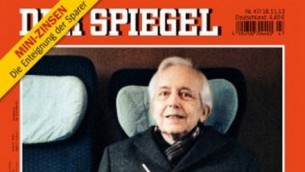 Some of Gurlitt’s heirs are themselves Jewish. Hildebrand Gurlitt, the original art dealer and Cornelius’s father, had a Jewish sister-in-law, making many of the heirs Jewish according to Nazi racial laws, according to their statement.

The works, whose value has been estimated at hundreds of millions of dollars, were seized by authorities in February 2012 when they were discovered by chance in the course of a small-scale tax evasion investigation.

Hildebrand Gurlitt acquired most of the paintings in the 1930s and 1940s, when he worked as an art dealer tasked by the Nazis with selling works stolen from Jewish families and avant-garde art seized from German museums that the Adolf Hitler regime deemed “degenerate.”

Earlier in November, Ronald Lauder, the head of the World Jewish Congress, warned the museum against accepting the collection, claiming such a move “would open a Pandora’s Box and cause an avalanche of trials” by rival claimants to the stolen art.

AFP and JTA contributed to this report.