Neil MacGregor: ‘There is no possibility of putting the Elgin Marbles back’ 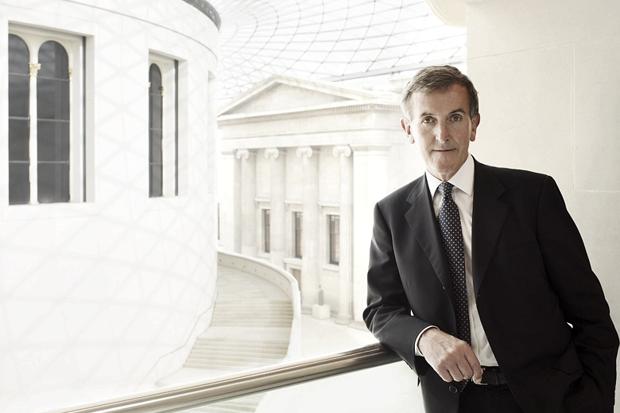 Neil MacGregor in the Great Court of the British Museum

If he’s a man under pressure he seems blithely unaware of it. At precisely 8.58am last Tuesday a dapper 68-year-old docks his Boris bike and walks through the great gates of his institution, which are still closed to the public. “Morning, Neil,” says the security guard. “Gentleman from The Times waiting to see you.” The director of the British Museum has arrived for work.

During his 15 years in charge of the National Gallery, Neil MacGregor was nicknamed Saint Neil by his adoring staff, partly because of his Christian beliefs and partly because he ran that place with a heavenly touch. After 12 years at the helm of the BM the halo is still in place — just.

It’s hard to recall now how disunited and financially adrift the mighty Bloomsbury institution seemed before MacGregor arrived. He has pulled it round and his own adroit media achievements — notably the marvellous BBC Radio 4 series A History of the World in 100 Objects— have given its treasures a much higher profile. With a new book and another Radio 4 series, he is doing the same thing for the BM’s latest big exhibition, Germany: Memories of a Nation.

Yet in some quarters, particularly around southern Europe, MacGregor is regarded more as devil than saint. He has never wavered from his view that the Elgin Marbles (or the Parthenon Sculptures, as the BM officially calls them) should stay in Bloomsbury rather than be returned to Athens, from where they were removed by Lord Elgin between 1801 and 1805.

Now the Greeks are mounting their strongest attack on the BM’s position since the 1970s heyday of Melina Mercouri. They have hired a team of media-savvy human rights lawyers, including Geoffrey Robertson and Amal Clooney (wife of George).

With a film about wartime art looting to publicise, Clooney himself also joined the attack earlier this year. Unesco, no less, has now called on Britain to take part in a “mediation procedure” with the Greeks to resolve the issue.

“The pictures in the National Gallery, the objects in the British Museum, are held by the trustees and their duty is to preserve the objects for the study and enjoyment of the whole world. They have a charitable responsibility imposed by law to ensure that those objects give maximum public benefit.”

It’s the belief of MacGregor and his trustees (who, he points out, include “two Nobel prize-winners and distinguished people from all over the world”) that the Marbles will give “maximum public benefit” by staying in London, rather than going to a new museum in Athens.

“From its beginning 250 years ago, the point of the BM was gathering together objects in one place to tell narratives about the world,” he says. “When the Parthenon Sculptures came to London it was the first time that they could be seen at eye-level.

“They stopped being architectural details in the Parthenon and became sculptures in their own right. They became part of a different story — of what the human body has meant in world culture. In Athens they would be part of an exclusively Athenian story.”

Athenian? “Yes. It’s not even a Greek monument. Many other Greek cities and islands protested bitterly about the money taken from them to build this in Athens.”

Surely one of the strongest Greek arguments is that all the Parthenon Sculptures should be reunited — and the obvious place for that to happen is as close to the Parthenon as possible. “Well, about 30 per cent of the Sculptures are in Athens and 30 per cent are here,” MacGregor counters.

“You don’t have to be very mathematical to see that quite a lot of them no longer exist. So there’s no possibility of recovering an artistic entity and even less of putting them back in the ruined building from which they came. Indeed, the Greek authorities have continued Lord Elgin’s work of removing sculptures for exactly the same reason: to protect them and to study them.”

Another argument put forward by the Greeks is that the Marbles were illegally removed by Elgin. He certainly negotiated with the ruling authorities in Athens, but in the early 19th century that was the Ottoman empire, not the Greeks. “Was the acquisition legal?” MacGregor asks rhetorically before answering himself with a rather optimistic generalisation: “I think everybody would have to agree that it was.”

Isn’t the vital document giving Elgin the right to remove the Marbles missing? “You had to surrender the document as you exported,” MacGregor replies — now every inch the tenacious Scottish lawyer he once trained to be. “That’s the point. Everything was done very publicly, very slowly. In 1800 you couldn’t move great slabs of marble quickly. At any point the Ottoman authorities could have stopped it.”

Nevertheless, if artefacts acquired the same way as Elgin acquired the Marbles were offered to the BM today, wouldn’t modern ethical guidelines prevent their acceptance? MacGregor refutes even this, pointing to what he considers to be a present-day parallel. “The BM excavates in Sudan today at the invitation of the authorities,” he says. “And the Sudanese authorities allow us to keep some of what we find.”

So for all Mrs Clooney’s glamorous entreaties, is the BM still determined not even to talk to the Greeks about the future of the Marbles? “On the contrary,” MacGregor says. “The trustees have always been ready for any discussions. The complication is that the Greek government will not recognise the trustees as the legal owners, so conversations are difficult.”

Then how about lending the Marbles (or the parts fit enough to travel) as a temporary exhibition? After all, the BM is (as MacGregor points out) the most generous lender of all the world’s great museums. “The Greek authorities are not interested in borrowing them,” he replies. “That’s sad because these sculptures do belong to everyone. Letting them be seen in different places is important.”

Odd though it now seems, MacGregor was expecting to spend this autumn thinking and talking about Germany, not Greece. His book,Germany: Memories of a Nation, is published next week to coincide with the 25th anniversary of the fall of the Berlin Wall, as well as the BM’s exhibition of the same name.

“To put it another way, if you are a young German today, looking back over your shoulder at the past like the Gerhard Richter portrait of his daughter in the exhibition, what do you see?”

How do present-day Germans see their own history? “Very differently from how we see ours,” MacGregor says. “History for us is about reaffirming national achievement, national destinies. Whereas for Germans history is, in Michael Stürmer’s extraordinary phrase, ‘that which must not be allowed to happen again’.

“And no other country has explored the painful parts of its history with such rigour and intensity. Italy, France and Austria were all complicit, to different extents, with the Nazi regime, and none of them has carried out this rigorous examination.”

MacGregor’s book ranges as widely as the exhibition — through five centuries from Luther to reunification and beyond. Indeed, one part of his thesis is that “Germany” has always been an idea rather than a fixed geographical entity. Another is that the names of German cities can simultaneously evoke feelings of historical pride and revulsion in modern-day Germans.

He cites the example of Weimar. “It was the city of Goethe, this great cosmopolitan, world-embracing figure — the British Museum in human form, if you like. Then in the early 20th century it was where the Bauhaus school reimagined the world in a completely cosmopolitan, non-national, humane way.

“Yet it was also the city of the Buchenwald concentration camp. So in that one city you have the best and the worst of a great civilisation. The Germans constantly ask themselves how these things could coexist in their history, and that is admirable.”

Although the Elgin Marbles row may make him seem like one, MacGregor is far from being a conventional member of the British establishment. He accepted his appointment to the Order of Merit in 2010 but declined a knighthood in 1999 — the first National Gallery director to do so. When I ask him why, he clams up. “We have a convention in this country that we don’t discuss these things,” he says.

He is no more forthcoming about how much longer he might run the BM. “That’s for the trustees to decide,” he says. “I will say that this is a wonderful place to work: living daily with the greatest objects in the world and looking at them with the world’s greatest scholars.” From the fierce glint in his eye I surmise that he’s not going to quit just yet. And while he stays, so do the Marbles.

Neil MacGregor’s Germany: Memories of a Nation is published by Allen Lane