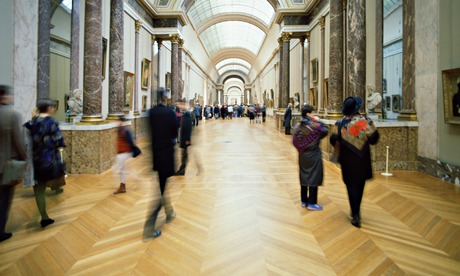 Interior of Louvre, Paris. The French law on artefacts taken from abroad is now being challenged internationally.

Ever since explorers, scientists and soldiers started travelling the world and bringing back treasures, France has upheld the principle of the “inalienability” of public heritage. The works that are now in French museums and collections will, supposedly, remain a part of national heritage for ever. This principle was established in 1566, when the edict of Moulins proclaimed that the royal domain was inalienable and imprescriptible. In simpler terms: the sovereign could not give away the assets he or she inherited. Two centuries later, the French revolution based its definition of the public domain on the same principle. It was the only point of reference for explorers sailing round the world in search of possessions and learning.

But in the past few years, changes in the international balance of political and economic power have upset this way of thinking. Demands for restitution have targeted anything from works of art to human remains and archaeological finds. Particularly odd examples include a fossil Mosasaurus (Meuse lizard), which was unearthed at Maastricht in the 18th century and brought back to France by the army, and Baba Merzoug, a 12-tonne cannon that defended the port of Algiers for 200 years, then was shipped to Brest in 1834 where it has braved the drizzle ever since.

France’s former defeated foes are now demanding their treasure and history back. Having cast off colonial rule, they have learned to defend themselves. “In the past 20 years we have seen a complete change of mindset,” says Jacqueline Sanson, former head of the Bibliothèque Nationale de France. It played a key part in the 2010 Korean manuscript affair, in which the then president, Nicolas Sarkozy, returned documents to Seoul on a long-term loan.

“We now receive demands from quite unexpected quarters,” says Marie Cornu, a specialist in this area and head of the Centre for Study of International Judicial Cooperation.

Even the Natural History Museum in Paris, long untroubled by such questions, now has a legal department. “In the old days there were far fewer rules for collecting specimens in the field,” says the head of collections, Michel Guiraud. “People would go exploring and bring back whatever they found of interest. It was all part of collective appropriation by the scientific community. Now, adding an item to a collection is subject to a strict procedure.”

Archaeology – “the science of destruction”, as a researcher at the museum explains with a smile, “because you destroy to discover” – can no longer operate with the same freedom. Even botanists must obtain permits before carrying out surveys. In 2010 the Nagoya protocol on access and benefit-sharing (of biodiversity) established that each country owns the genetic resources on its territory.

The first text on the protection of cultural goods dates from 1954, but the real tipping point was the Unesco convention framed in November 1970. It introduced a series of non-retroactive obligations regarding “the means of prohibiting and preventing the illicit import, export and transfer of ownership of cultural property”. The convention underlines that “it is essential for every state to become increasingly alive to the moral obligations to respect its own cultural heritage and that of all nations”, and that “as cultural institutions, museums, libraries and archives should ensure that their collections are built up in accordance with universally recognised moral principles”.

The episode of the Tetaki reliefs illustrates the importance of this text. In 2009 Egypt demanded that the Louvre return five fragments of a wall painting from the tomb of Tetaki, an 18th-dynasty noble. To get round the Unesco convention, the French authorities initially claimed that the artefacts had left Egypt before the text was ratified. However, it emerged that they had been stolen at a later date, and France was obliged to return them to Egypt.

The next major step came in 1995, with the Unidroit convention on stolen or illegally exported cultural objects. It introduced the concept of “due diligence”. “Under French law, if the owner of an object that has been stolen or mislaid, then purchased [by a third party], attempts to reclaim it, they will not necessarily be successful in their plea,” Cornu explains. Before the Unidroit convention, “the present owner could say: ‘Well, prove that I knew.’ Now this notion of being in good faith is no longer sufficient. With the convention, we also see buyers performing due diligence to avoid purchasing stolen or plundered art. So clues are collected on the speed of transactions, successive sales, prices, vendors’ qualifications and such.”

But the Unidroit convention proved a source of insecurity for buyers. “Only 35 states ratified it,” says Cornu. “France, for instance, signed the convention, but has not ratified it. The lower chamber of the French parliament passed the motion, but there was so much resistance among dealers that the upper house didn’t even table the bill. Having said that, even without being ratified, the convention has affected practice, in particular the way the courts try such cases.” 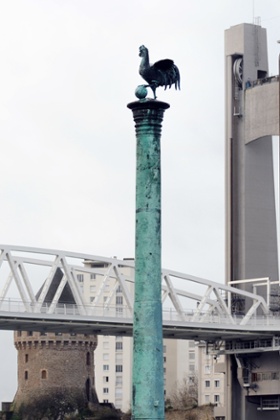 Baba Merzoug, a 16th-century cannon from Algiers that was taken to Brest in 1834.

Progress on the legal front opened the way for a profound change in mentalities, culminating at the turn of the century in renewed interest in restitution. This is directly related to the emergence of a new demand: the right of peoples – and not only states – to defend their identity and protect their culture. Article 11 of the 2008 UN declaration on the rights of indigenous peoples says: “States shall provide redress through effective mechanisms, which may include restitution, developed in conjunction with indigenous peoples, with respect to their cultural, intellectual, religious and spiritual property taken without their free, prior and informed consent or in violation of their laws, traditions and customs.”

However, this is still a difficult issue. This is because indigenous peoples are not states. When Maoris demanded the return of the heads of their ancestors, the New Zealand state had to make the application.

It’s also because the legal debate has shifted from the status of objects to the issue of human rights. But this new perception of world heritage, pitting moral principle and the quest for identity against the universality of science, requires museums to rethink the doctrine of inalienable collections.

The issue of what is referred to as “human remains” played a key role in this shift. France’s first gesture in this respect came in 2002, when it returned the remains of Saartjie Baartman to her South African homeland. Baartman was the most famous of two women who were taken to Europe in 1810, then exhibited as a fair attraction under the name Hottentot Venus.

In 2006 Rouen’s city museum, which included a Maori head in its collection, was about to reopen. Citing “barbaric trafficking in body parts”, the deputy mayor, Catherine Morin-Desailly, said the head should be returned. She made contact with New Zealand’s ambassador to France, Sarah Dennis, and the former chairman of the UN World Heritage Committee, Ariki Nuitumu Te Heuheu. The museum was furious, arguing that the head was an inalienable part of French heritage. If it was handed back, it said, it would create a precedent affecting about 15 similar items in other French collections.

As often happens, policymakers responded with new legislation. This proved necessary to resolve the Hottentot Venus controversy and, in May 2010, for the Maori remains. After a long dispute between museum staff, backed by the arts ministry, and Morin-Desailly, supported by many MPs, the Maori heads were returned to New Zealand in 2011. A national committee was set up, comprising experts and policymakers, and tasked with ruling on restitution.

But for the scientists, the matter is not settled. “Mindsets have certainly changed at a policymaking level, but not for heads of collections or museums,” Guiraud says. “The problem is to define the right perimeter. What is a head? Specifically there are Maori heads, but we also have a great many skulls.” The Natural History Museum in Paris has around 18,000 skulls and 30,000 assorted bones in its reserves. “What’s more,” he explains, “we’d have to check they’re really Maori. [They] wiped out the Moriori, the population of the Chatham Islands. There is no way of saying whether these aren’t in fact the skulls of their victims.

“Faced with repeated demands for the restitution of human remains, we have established a line of conduct: if an individual is named, we consider an application is admissible. As provided for by the Noumea accord [of 1998 on future self-determination], the head of Atai, the Kanak chief who led the 1878 insurrection, was returned to New Caledonia in September, because it had been identified. On the other hand, for anonymous heads – as is the case with several indigenous Australians – we are against restitution.”

Sometimes the political background complicates things. “Senegal wants the remains of the [last] King of Casamance, but the people of Casamance itself want independence. We’re reluctant to get involved. We step back from politics to focus on just science, and we avoid moral issues.”

Guiraud defends the principle of inalienability on scientific grounds. “We consider that all collections contribute to knowledge,” he says. “As such they must remain available to the scientific community. That is all that counts for us. Fifty years ago, people were saying: ‘But you’ve measured all these bones in every possible way.’

“Then came the discovery of DNA, enabling us to track the movement of gene pools, and isotopes, revealing diet and disease. In the future some new tool may allow us to reconsider these remains yet again.”