What makes a sale a restitution? 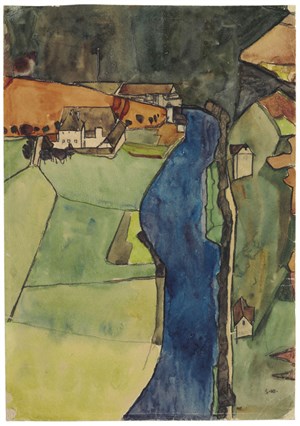 Today, Christie’s New York will auction Stadt am blauen Fluss (Krumau) (city on a blue river), a 1910 watercolour painted by Egon Schiele when he was 20. The work on paper, carrying an estimate of $800,000 to $1.2m, comes from the collection of Fritz Grünbaum, a Viennese Jewish cabaret entertainer who died in Dachau in 1941. The sale has raised questions about provenance research, as there is no clear consensus on the fate of Grünbaum’s collection after his death.

Christie’s says the sale, which is the result of a private settlement agreement between the current consignor (the estate of Ilona Gerstel) and Grünbaum’s heirs, will give the new buyer clear title to the work. But the author of the Egon Schiele catalogue raisonné and the Swiss auction house that sold Stadt am blauen Fluss in 1956 question Christie’s version of the picture’s provenance.

In the auction catalogue, Christie’s lists Schenker & Co, the transport firm that shipped looted Jewish property for the Nazis, as holding the picture in 1938. Grünbaum’s heirs, represented by the New York lawyer Raymond Dowd, argue that Schenker’s custody of the collection is proof that it was looted.

The auction house has also left out the name of Grünbaum’s sister-in-law, Mathilde Lukacs, as a previous owner. According to research recognised by a range of provenance experts, Lukacs sold the picture at Gutekunst & Klipstein (now Galerie Kornfeld) in Bern, Switzerland, in 1956. Lawyers for Grünbaum’s estate maintain that Lukacs’s lengthy correspondence with the Swiss dealer Eberhard Kornfeld was, in fact, a forgery, and furthermore that she was never legally named Grünbaum’s heir. Christie’s provenance reflects that position. (Another work by Schiele from Grünbaum’s collection that sold at Sotheby’s last night for $1.1m lists Lukacs as an owner.)

“Christie's routinely asks me, as the author of the Schiele catalogue raisonné, to provide provenance information for works by the artist, and I was contacted by their researchers regarding Stadt am blauen Fluss before their catalogue went to press,” says Jane Kallir, whose Galerie St Etienne is listed as having sold the work to Gerstel. “I told Christie’s that, to the best of my knowledge, this work was sold by Mathilde Lukacs, the sister-in-law of Fritz Grünbaum, to the Galerie Kornfeld in 1956. I was very surprised to see that the name ‘Schenker’ was substituted for that of Lukacs in Christie’s published provenance. I asked Christie’s if they had any documentation proving Schenker’s ownership of Stadt am blauen Fluss, but so far they have failed to provide any.” A spokesman for Christie’s says that it is clear that “for some period of time Schenker & Co had custody and control over the Grunbaum collection” and that, where there is evidence to show that a storage facility had possession and control of property during WWII, it is their practice to include those facts in the provenance.

Christine Stauffer, the director of Galerie Kornfeld says that records at Kornfeld contain no evidence that Grünbaum’s collection of around 400 works, including 81 by Schiele, was looted, although its location during the Second World War and the early 1950s remains a mystery. Stauffer says that her questions to Christie’s about the provenance had not been answered.

While a question over Lukacs’s title to the works might linger, calling her correspondence with Kornfeld a forgery may be a reach. The value of Schiele works on paper was extremely low in the 1950s, hardly worth the labour of forging dozens of handwritten letters.

Also, much that is known about Fritz Grünbaum’s art collection comes from those letters, say Jane Kallir and the London dealer Richard Nagy, another critic of the Christie’s provenance.

“If you contend that Lukacs didn’t exist—and that the documents that Kornfeld produced, of which there are a few dozen, that cumulatively document a relationship and a collection, have been invented—then there is absolutely nothing to connect most of the works to Fritz Grünbaum,” said Kallir. “Mathilde Lukacs is the missing link. I have never understood the logic of saying that Kornfeld invented her, or forged the documents.” Christie’s do not suggest that Lukacs did not exist, only that the claim that she owned the works is “not sufficiently reliable” to include in their catalogue.

Is this the first case of many? At a press conference held on 31 October at the Museum of Jewish Heritage in New York, Timothy Reif, a Grünbaum heir, called Christie’s actions “the kind of acknowledgement that is appropriate”. Reif would not comment, however, on whether the family had its eyes on works from Grünbaum’s collection that now hang in New York at the Museum of Modern Art or in the Neue Galerie. A recent independent report commissioned by the Austrian government to study works by Schiele at the Leopold Museum in Vienna found no grounds to restitute any pictures that once belonged to Grünbaum.

At the Art Loss Register, James Ratcliffe, the director of recoveries and general counsel, sees broader implications: “Provenance at auction is something that, at a later date, researchers—not least those in the field of restitution—rely upon, as a matter of fact. Where it is not a matter of fact, and there is any uncertainty or debate, we would feel that it’s quite important that that is identified, rather than being presented as fact.”

Update: The work sold on Wednesday night for $2.97m including buyer's premium to an anonymous telephone bidder.